An Artist’s Dream of Travelling

One of Kartono Yudhokusumo’s paintings exhibited at the Steleng Seni-Lukis painting exhibition held by the Ministry of Information of the Republic of Indonesia in Yogyakarta in 1949, is a unique landscape depicting the dormant volcanic craters of the Dieng plateau. The painting seems to be loosely composed using the so-called rule of thirds, which divides the painting into nine equal sections. The background, which occupies four-ninths of the painting, become the main part of the scene which viewers will initially notice. In the centre of the painting, below the low clouds lingering to the hills of the plateau, a series of craters can be seen. From some of them, smoke consisting primarily of water vapor, carbon dioxide and sulfur gases can be seen coming out. Just below the centre of the canvas, are two turquoise coloured crater lakes.

The foreground of the painting occupies the bottom third of the canvas. It starts on the left with a kind of pine tree standing in front of a thick forest of trees behind it. Not far from the tree, stands a young man wearing a dark blue sweater over white shirt and fandango pink trousers tucked into his crew high white socks. Sporting a boater straw hat and a branch of a tree as his walking stick, he stands on a rock, gazing towards the view that awaits him, reminding viewers familiar with Romanticism to the lone figure Caspar David Friedrich’s Wanderer above the Sea of Fog (1818). To his right is a woman, seated, painting the view. Then, on the right side of the canvas, by a fallen branch of a dead tree, a boy is hiding from his little sister on the right side of the canvas. A plain black women’s bicycle rests on the previously mentioned fallen tree branch. To the tiny girl’s left is a bicycle, coloured red and green, matching the girl’s dress and hat. It is equipped with large horn, a rear-view mirror and a leather crossbar bag, decorated with a red-and-white Indonesian flag and rear seat-post box which serves as a signboard. “Art Studio, Advertising, Decor, Poster” is written on it. Behind the colourful bicycle and the girl, three pine trees stand tall, taking over the entire third of the right side of the canvas, and at the same time marking the end of the foreground.

The title Sightseeing in Dieng is justified by the presence of the four human figures, who apparently came to the scene on two bicycles. The woman most likely used the black bicycle, which is a woman’s bicycle with a crossbar curved downwards to allow women in skirts to ride it without trouble. So, the red and green bicycle must have been ridden by the adult male, whose vocation, as indicated by the words written on his rear seat-post box, is an artist. Could Kartono have meant this as his family portrait? In 1949, Kartono was already married to Nurnaningsih, a beautiful woman who eventually became a famous movie star in the mid-1950s. While when they got married is still uncertain, we can estimate it to be around 1945 or 1946, and divorced by 1952 or 1953. 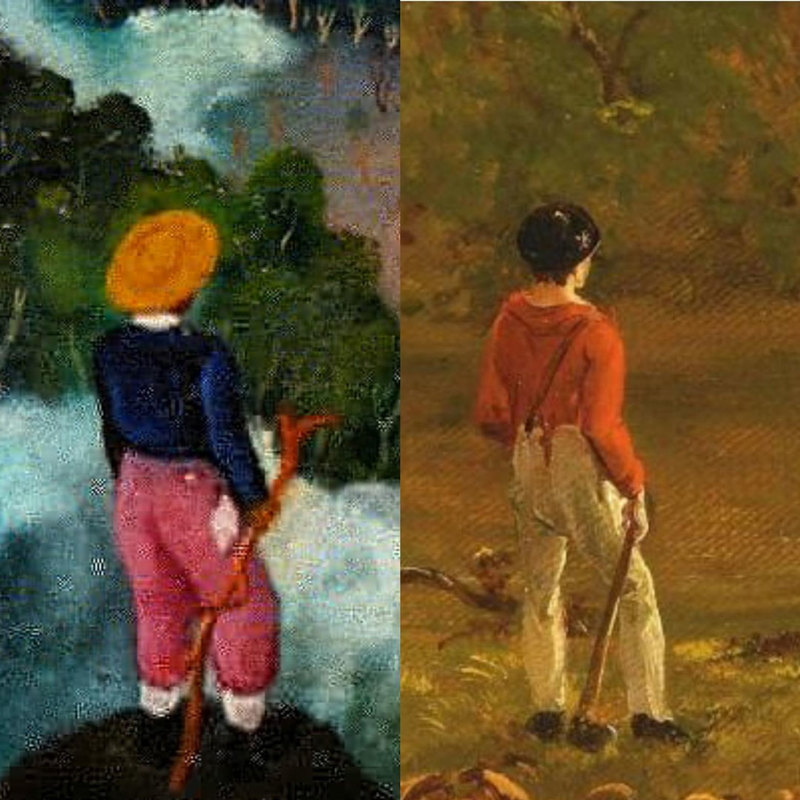 Their daughter was born on 24 January 1949. During their time in Yogyakarta, Kartono and Nurna were known to have travelled around town on their tandem bicycle, bringing their baby with them wherever they went. One day, a Dutch soldier stopped them, and checked their belongings. The soldier checked the charcoal in their baskets but could not find anything. Finally, he asked Kartono, “what is in the suitcase” and asked him to open it. “There is nothing special in it,” answered Kartono, opening the suitcase. The soldier peeked in, only to find Baby Karti giggling, moving her hands and feet. He was so surprised and got worried that the baby would suffocate in the suitcase. Kartono and Nurna explained that they had made air holes all around, to prevent that from happening. The soldier let them continue their trip.

The little girl in the painting seems two or three years of age. Therefore, even if we presume that the boy is a nephew of the man and woman, or a member of another who is also visiting the place, it is not likely that the little girl is the daughter of Kartono and Nurnaningsih. Yet, it is always possible for the artist to portray a fantasy of his family at a time in the future. In any case, this painting is not likely to be a realistic portrayal of a young couple from Yogyakarta who decided to go on a 120 kilometre uphill bicycling day trip to Dieng, bringing their young child or children. The artist seems to be just having fun, creating a fictitious family of a character with similar vocation to himself.

It seems that Kartono combined the use of an eye-level viewpoint with an elevated viewpoint to show more of the landscape elements in his painting. The inclusion of human figure is of course a common practice in landscape painting, since the 16th century. However, in this painting, the figures are no longer mere staffage for a landscape; rather, they clearly play major roles in the painting.

The figures in the painting bring to mind the work of the 19th century American painter Thomas Cole, the founder of the Hudson River School of landscape painting. The hiker in A View of the Two Lakes and Mountain House, Catskill Mountains, Morning (1844), now at the Brooklyn Museum, bridges Kartono’s Sightseeing in Dieng to Friedrich’s Wanderer above the Sea of Fog (1818). Although the figure is much smaller in proportional scale, it still plays a quiet yet important role in the painting. We have to admit that Friedrich’s wanderer appears more sophisticated than Cole’s hiker. Friedrich’s wanderer seems slimmer, younger and readier to delve into the land under the sea of fog he faces. Wearing a smart frock coat, holding a simple cane in his hand, he seems determined to walk right into the fog before him. While the two lakes and the mountain house are right in front of him, Cole’s hiker looks to his left, hinting that he is not yet quite ready to enter the landscape before him. He wears a cape and holds a tree branch which he uses as his walking stick. He clasps a thick leather portfolio in his left arm. Other than the fact that the figure stands on a rock holding a stick, nothing else about him connects Kartono to Cole.

By contrast, the stance of the adult male figure in Kartono’s painting shows a striking resemblance to the stance of the figure in Thomas Cole’s River in the Catskills (1843), now at the Museum of Fine Arts in Boston. The figures both gaze towards the landscape at a 60° angle. In each of their right hands is a cut tree branch, which they use as a walking stick. Their right feet are both placed slightly forward, shifting the weight of their bodies to the left side. The two figures are so similar that it is hard to imagine Kartono Yudhokusumo unaware of Thomas Cole’s work. On the other hand, we wonder how the Indonesian painter might have gained access to the American painter’s works. However, approaching the centennial commemoration of his death in 1848, there seemed to be a revival of interest in Thomas Cole and his works in America, culminating in an exhibition titled Thomas Cole, One Hundred Years Later curated by Esther Isabel Learner was held at the Wadsworth Atheneum, in Hartford, Connecticut from 12 November 1948 to 2 January, 1949 and at the Whitney Museum of American Art, New York City, from 8 to 30 January 1949. Is it possible that he might have obtained access to publications about Thomas Cole at the peak of the Indonesian revolutionary war? From whom or where might he have received them?

Although there might not be any direct visual similarities between Kartono’s figures in Sightseeing in Dieng and Cole’s other paintings, the figures in Kartono’s painting somehow reminds us of Cole’s works. In The Connecticut River near Northampton (The Oxbow) (1836), now at the Metropolitan Museum of Art. Cole includes a very small portrait of himself painting the scene. Cole’s figure, hidden in the vast landscape, is himself, a male painter using a portable tripod easel, while Kartono’s easily visible figure is a woman, painting using a box easel. In The Temple of Segesta with the Artist Sketching (ca. 1942), now at the Museum of Fine Arts in Boston, once again Cole incorporates himself sitting on a rock sketching the scene. On another rock not far away, lies the artist’s portfolio in red and green; “T. Cole” is written on it. Although not visually similar, there is a possibility that Kartono may have borrowed some ideas from Cole. However, the question remains: how might Kartono have gained access to information or publications about Thomas Cole?