Perhaps the most striking painting of an Indonesian subject is Rudolf Bonnet’s depiction of the preparation of a Balinese Dance from the collection of President Soekarno.

The majestic central figure stands tall with his golden headdress already placed on his head, while a brightly colored cloth is being prepared to be wrapped over the white garb which he has already worn around his waist. Contrasted against his surroundings which appear quite colorful but darker in shade, he appears gleaming and stylish.

It is quite clear that the painter was inspired by the character of the dancer, who struck an elegant pose. Indeed, the dancer must have had style, but the artist did not stop there. He further enhanced the dancer’s stylish pose through the elongation of the subject’s body.

The use of elongation has become one of the main characteristics of Bonnet’s artistic style. We can see this in the artist’s rendition of the Keris Dance. In the famous Balinese Barong Dance, men attempt unsuccessfully to stab their own chests with long keris daggers. Cast by the evil Rangda’s spell to turn their weapons on their own selves, Barong protected them with his own supernatural powers.This fragment of the dance is known as the Keris Dance.

Bonnet’s elongation of the anatomy of the strong muscular male figures in this pastel on paper piece dramatizes the tension and freight that both the dancers and the audience experience while attending the actual dance, extending it to the viewers of the artwork. It is not only one of his most dramatic, but also one of his most stylish works. 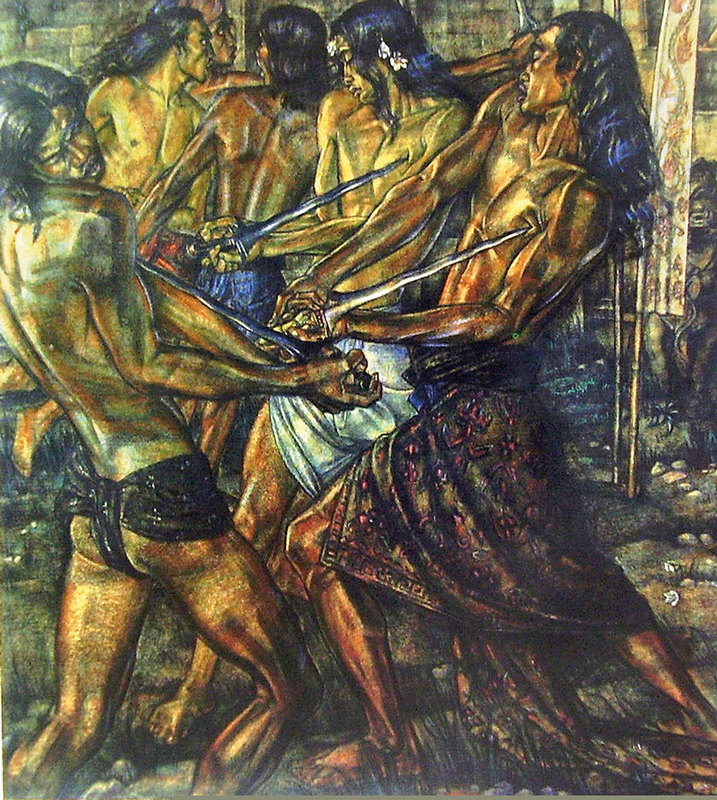 While stylization through elongation is Bonnet’s signature approach, the way other artists approach style might not be as easily defined. In any case, when the artist becomes inspired by the subject’s stylishness in appearance, this usually evokes the artist to do his best in painting his subject matter.

Even before Bonnet, other foreign artists have noticed the elegance and hipness of Indonesian dancers. Around 1925, the famous art forger Han van Meegeren made a large charcoal and pastels drawing of the famous Javanese dancer Raden Mas Djodjana performing as wayang orang character Gatotkaca. The dancer is rendered in a three-quarter view so as to emphasize his elegant dance stance with his feet spread away from each other. Despite the artist’s obscurity and notoriety in the world of art, the artist was in fact very talented and apparently had an eye for style. Unfortunately, he was not patient enough in his struggle as an artist, and resorted to making forgeries. It made him famous, but for all the wrong reasons.

Many artists are inspired by the chicness of Indonesian women, particularly when they are dressed in their traditional clothes. It seems that during his 1955 visit to Indonesia, Diego Rivera painted Malay Woman with Flowers, depicting a cheerful woman dressed in a red kebaya panjang with the translucent white brocade shoulder cloth worn spread out over the left part of her body and upper arm. A bouquet of red flowers rest on her right arm. It is a simple pose, but one that captures the subject’s chicness.

Basoeki Abdullah’s famous painting of Fatmawati Sukarno depicts the Indonesian first lady at the time also dressed in a red kebaya. Here she wears a translucent white brocade as a kerudung over her head. Many women dressed in the similar elegant style, but certainly Ibu Fatmawati was the epitome of style for many Indonesian women. 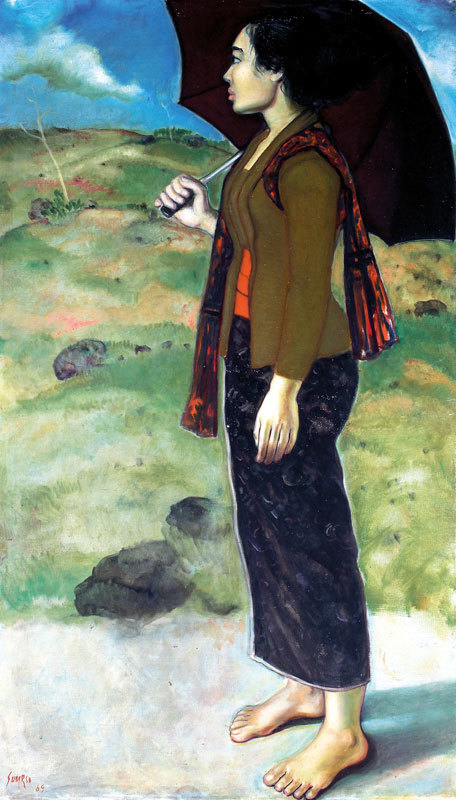 With so many variations, the kebaya indeed becomes a statement of style for Indonesian women, not only among the prominent, but also the commoners. In Perempuan Berpayung, Sudarso paints a woman in a Kutubaru style kebaya, which includes an additional middle part covering the upper chest creating a bridge between the left and right parts of the kebaya, keeping them slightly apart from each other. The brightly colored kemben long cloth torso wrap is left exposed under the middle bridge of the kebaya. This stylish dress is characteristic of modern Indonesian women, who appear independent and dynamic while not forgetting tradition. It is this elegant style that inspired Sudarso to paint this painting in the best of his own style.

In his painting Pelukis dan Anaknya (1950) the famous Indonesian maestro Affandi features a young woman dressed in kebaya and batik sarung. The title of the painting, which is inscribed on the lower left corner of the painting, curiously states the appearance of the artist in the painting. Indeed, there is part of a figure of a man who seems to be standing in front the main subject. The male figure’s right hand, part of his right hip, right leg and feet appear as if they are seen from a high angle, making it rather awkwardly composed vis-á-vis the main subject matter. From the white briefs that he is wearing, we get a further hint that the figure is Affandi himself. Despite prominent appearance of the artist in the title of the painting, placing “the painter” before the main subject, “his daughter”, the painting itself is clearly one in which the artist proudly presents his stylish daughter, Kartika.

More often than otherwise it seems that style, stylishness and art go hand-in-hand. The stylishness of the subject matter often inspires artists to create great works of art, enhancing their own characteristic artistic style. Sometimes it also leads them towards stylization, emphasizing and even exaggerating the subject’s stylishness. Other times, artists may also honor the unique personal stylishness of their subject matter and choose to portray that in their own characteristic artistic approaches.