Once upon a morning in 1975, Jakarta Governor Ali Sadikin arrived at Jakarta’s pavilion at Taman Mini Indonesia Indah, which was going to be officiated by President Soeharto later that afternoon. Several paintings had been installed there as part of an exhibition held in conjunction with the event. The governor arrived early that day to make sure that everything was in order. 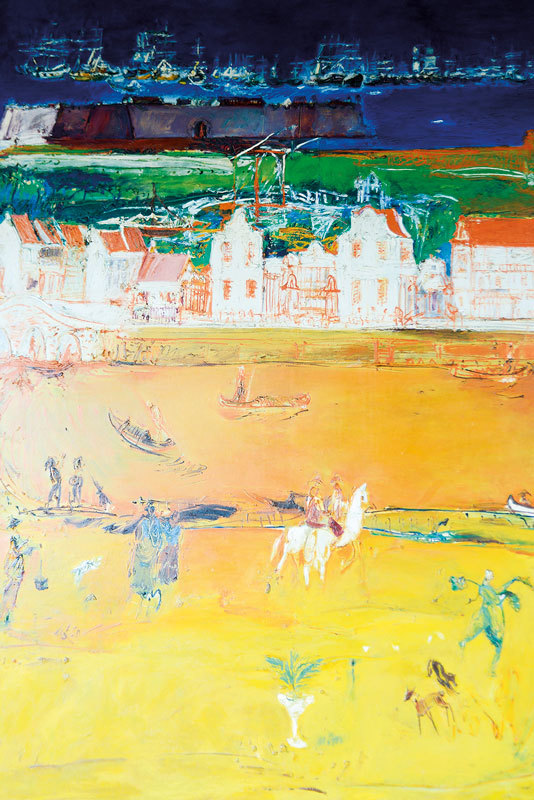 As he arrived, the painting that was placed right in front of the entrance immediately caught his attention. Prominent artist Srihadi Soedarsono’s painting Air Mancar was a depiction of the historic fountain on the MH Thamrin boulevard, just southwest of the National Monument in Central Jakarta. To everyone’s surprise, the Governor became furious. He asked for a big marker and wrote ““Sontoloyo! Apa ini reklame barang-barang Jepang?” (“Darn! Is this supposed to be an advertisement for Japanese products?”) across the upper part of the canvas, and signed his name below the inscription. He was so upset that he even wrote “Banzai”, “Dai Nippon” and “Bakero” on the buildings that were depicted. Apparently he was offended by the inclusion of Japanese brand names in the painting, and asked that the painting be immediately removed from the exhibition.

Srihadi did not take the incident personally. He never intended to offend anyone. He merely intended to portray his impressions of the MH Thamrin boulevard, and coincidentally the billboards of the Japanese brands installed above the buildings were very noticeable. So it was inevitable that the billboards were included in the painting. 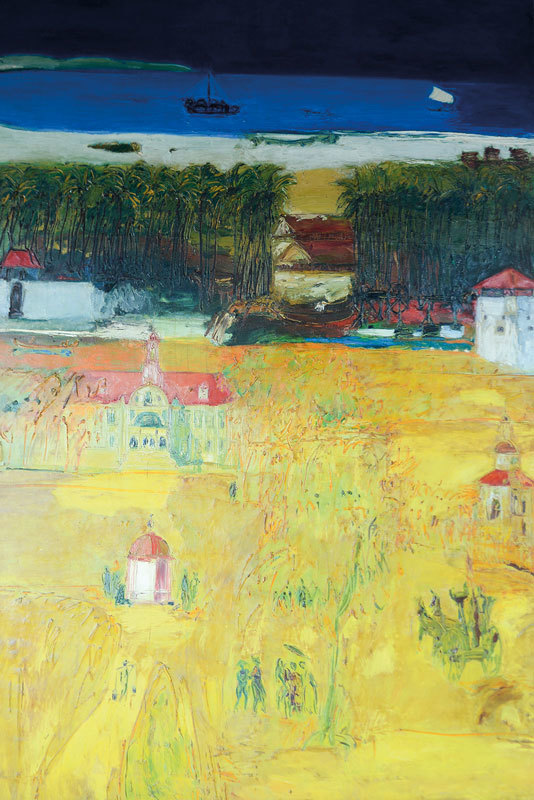 Actually, this incident shows that paintings, which do not actually portray the truth as it is, are often more potent than photographs, that actually capture images of  a scene as it is. Seeing reality in paintings seemed to be much more painful than seeing it in photographs. Perhaps the general public at the time was still too used to the idea of paintings as the romanticization and beautification of reality. Painters were expected to mask the bitter truth of reality and present images of serenity and beauty. If they did not do so, they were seen as trying to present criticism.

Meanwhile, Governor Ali Sadikin sought insight and advice from literary figure Ajip Rosidi of the Jakarta Arts Council and diplomat and cultural observer Ilen Surianegara. They drove around Jakarta to see if the city was filled with urban blight as Srihadi had portrayed. Rosidi and Surianegara spoke to the Governor about the significance of art and the role of artists. It seemed that they explained that when creating a painting, artists sometimes do convey specific viewpoints that can be considered as negative criticism, while other times they express their feelings about certain conditions and the end results appear spontaneously. Viewers can have their own interpretation about the painting and their reaction can be happy or sad and even angry. Apparently, the Governor quickly realized that artists were entitled to their own freedom to express. He felt guilty and asked the two men to arrange a meeting with  Srihadi. 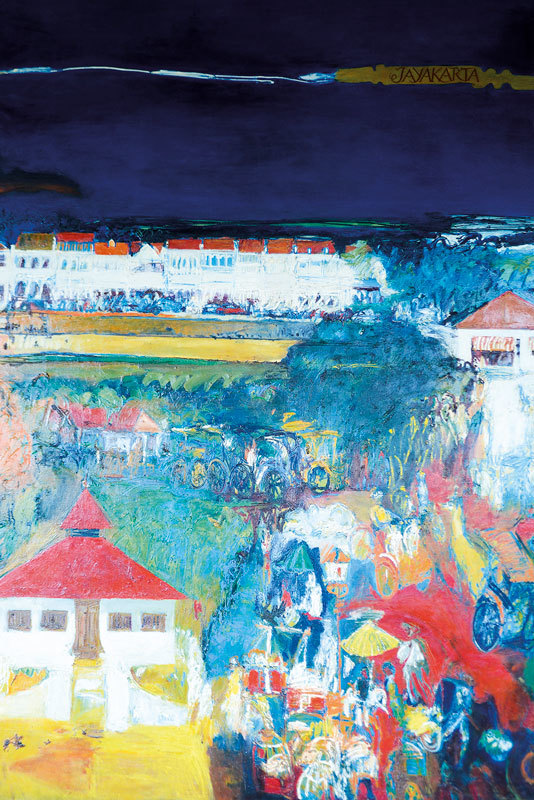 Receiving news that Governor Ali Sadikin wanted to meet him to offer his apologies to the artist, of course this shocked the artist. He could not imagine that the Governor, a high official of the government who also had a military background, would ever apologize to a simple artist like him. Yet it was true. Finally, the Governor and the artist met. Not only did the Governor offer his sincere apologies, he also asked if the artist was willing to create another painting. Of course the governor hoped that Srihadi would be willing to make a painting depicting Jakarta devoid of blight. Yet this time he realized that the artist might have another idea and he should welcome it.

Srihadi worked on some sketches right away. He decided to develop the theme of Jakarta’s historical development, from a sea port known as Jayakarta in 1527 to the modern metropolitan city  it had become in the mid-1970s, emphasizing the high tolerance of its multi-ethnic citizens. It was to be a painting that measured three meters in height and twelve meters in width. As a central image the artist initially wanted to include the governor, whom he came to respect highly, in front of the National Monument. However, Ali Sadikin thought that it was not necessary. The painting was named Jayakarta (“City of Victory”), which was known as one of Jakarta’s historic names. 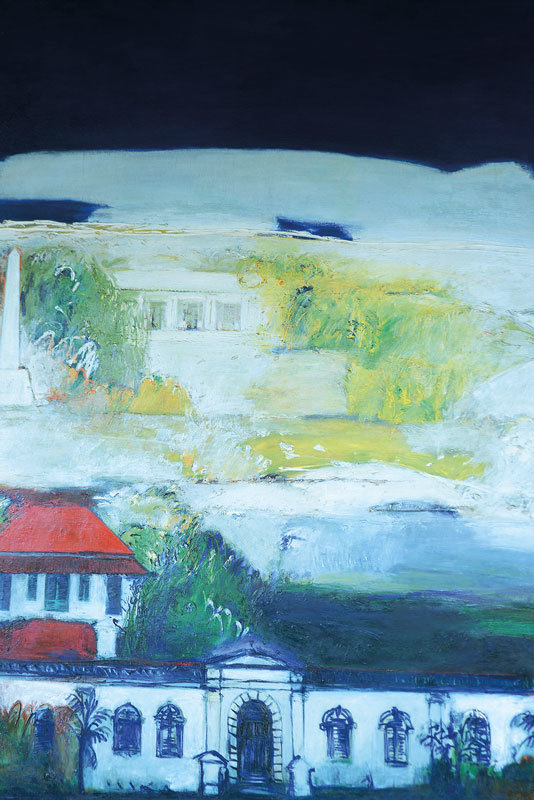 As the painting was quite big, Srihadi worked on it in an outdoor area near the art studios of the Bandung Institute of Technology. Once completed, the painting was installed on the 24th floor of the Jakarta City Hall, which was a special place for the governor to receive very important guests.

For decades, the painting remained there. The floor was later used for functions, and the painting was neglected. Often the banquet table was placed quite close to the painting, leaving it in not a great condition. 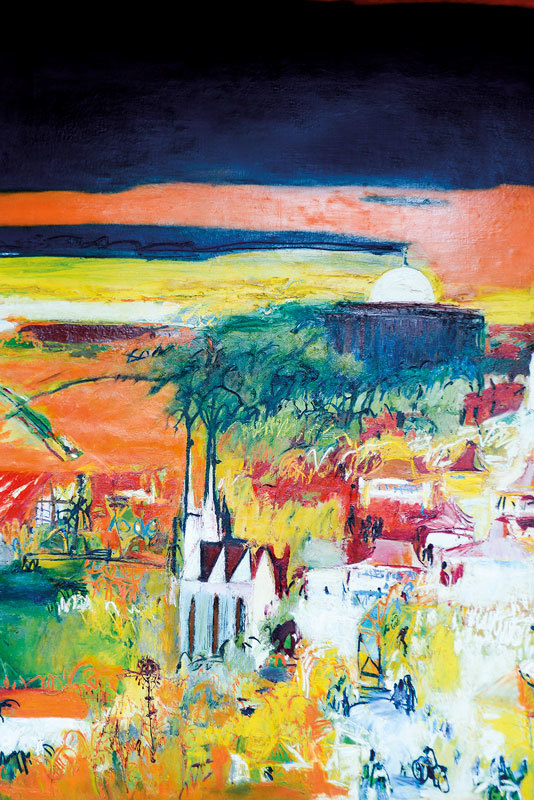 Although years had passed and it had been unclear what actually happened to Srihadi’s original Air Mancar painting after its removal from the 1975 exhibition, its fate had not ended. In 2003, Wastu “Tjong” Praganta, a former official of the Jakarta government who had salvaged the painting back in the day, handed the painting back to Ali Sadikin. The former governor returned the painting back to the artist in a simple ceremony at his private residence on Jl. Borobudur. As the painting had never been paid for, the artist was still its rightful owner.

“It made me have great respect and I was deeply touched by this gesture,” said Srihadi. He received the painting back from the hands of the very person who 28 years prior to that time demanded its removal. The painting is now back in Srihadi’s private collection as an invaluable historical artifact of Indonesia’s unique art history. 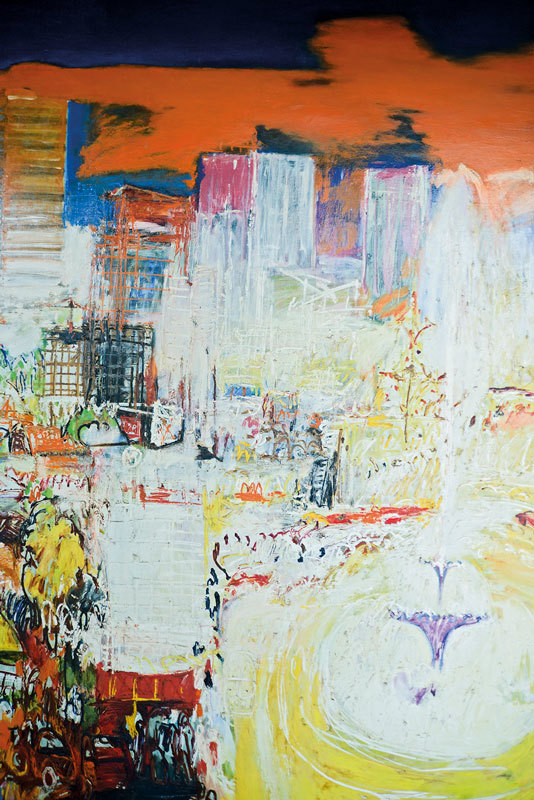 In 2007, Fauzi Bowo, a veteran civil servant of the Jakarta municipal government who had worked under Governor Ali Sadikin in the 1970s, was elected as Jakarta’s Governor. Srihadi took the opportunity to remind the Governor about the painting and suggested that the painting be restored. Ideas to expand the painting emerged. However, due to budgetary matters the project was put on hold.

In October 2016, when Srihadi Soedarsono attended the opening of the Friends of Jakarta Museums Foundation’s first exhibition Jatai Diri, held at the Jakarta Art (and Ceramics) Museum, he reminded the foundation’s members about the existence of his monumental painting. After quite an extensive search to trace the painting’s whereabouts, it was finally recovered. Apparently, following the deadlock due to budgetary matters, the painting was sent for cleaning and restoration in 2010. Following its completion the large painting, which consisted of  six large panels, was kept in storage pending a decision on where the painting should be reinstalled.

Last December, the Friends of Jakarta Museum Foundation invited a number of Indonesian art curators to work on a new storyline for the Jakarta Art Museum. The team decided that the painting Jayakarta should become part of the new storyline. Soon Jayakarta will be reintroduced to the public along with the plans for the new storyline of the museum.

Jakarta’s date of establishment, June 22nd, 1527 was determined by Jakarta Mayor Sudiro in 1958 based on the date Fatahillah was believed to have seized the Sunda Kelapa harbor and named it Jayakarta. This month, we celebrate Jakarta’s 490th anniversary with art and history!