Engaging in artistic activities, such as painting, drawing or sculpting has been found effective to prevent memory loss as well as maintain cognitive health, according to a 2015 study published in Neurology, a medical journal of the American Academy of Neurology. 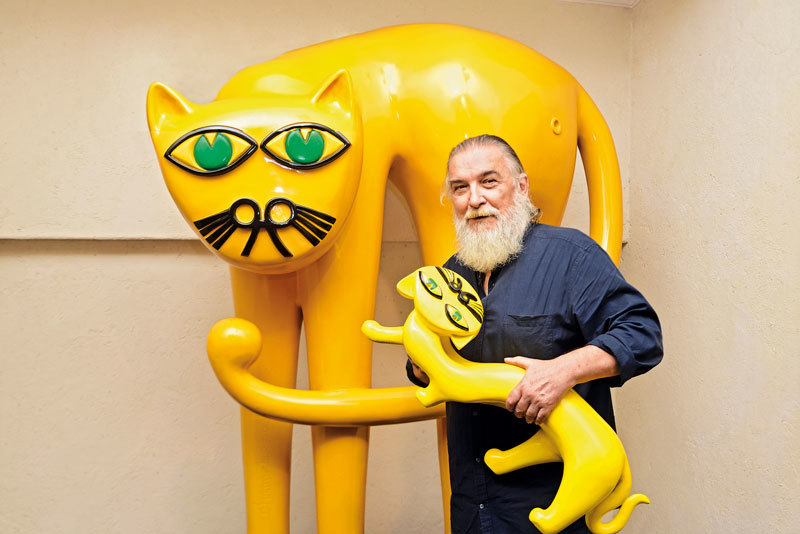 That article had always been an afterthought to me, until I met Didier Hamel- also known as D.H. Dhaimeler- a Jakarta-based French artist.

A painter, curator, writer and actor, Hamel is full of passion. At the age of 70, he remains well groomed and lively. Born and raised in Burgundy, a region famous for wines, Hamel first discovered his love for arts at the tender age of three.

“No one else in my family paints. Fortunately for me, I was educated in a very good institution where the teachers loved what they did and nurtured small kids to find their likings. My first drawing in that school apparently changed my whole life forever as I have never stopped drawing and painting ever since,” he said.

In the 1970s, he made the decision to come to Indonesia, where he would eventually spearhead a movement to introduce art for people of the developing nation.

“Things were very different back then. Art was often seen as a pretentious, exclusive object that belonged to the elites, which explained why the art scene in Jakarta was underdeveloped back then,” he said.

In 1986, Hamel and his partners founded Duta Fine Art Foundation in Kemang, South Jakarta. It’s a foundation that aims to promote the art to Indonesian public as well as facilitate local artists to exhibit their artwork.

“Our mission was and is to develop awareness and appreciation of art among Indonesians, not limited to any particular group,” he continued.

In hindsight, Duta Fine Art Foundation wasn’t his first attempt at establishing an art gallery. Three years earlier, he and a group of friends had established OET’s Gallery, which was opened by then-Vice President Adam Malik.

“The concept of an art gallery was quite revolutionary back then. There was no market. There were not many art collectors. Only a handful of people were attracted to and understood art, but we believed that the existence of art galleries was very important to a city. Unfortunately, due to limited resources and connections with the art community, we had to close within three years,” Hamel continued.

It’s stirring to see how much art means to him.

“I see art as a religion. Creating artwork feels like a spiritual experience that is very personal and fulfilling. Art brings people to their Zen. It is an attraction for the soul. I may survive without meals but I can’t go through a day without art,” he said.

As he trod the path of life in his new home, Hamel began exploring various painting styles.

“When I first arrived here in the 1970s, my paintings illustrated the beauty of Indonesian women in realism. After that, I focused on surrealism. I also liked to make witty, unique cat sculptures. Then I moved to abstract art and my latest period, which is all about pop art that’s fun and bold. I don’t have any particular signature style as I like to try and explore something new,” he said.

But painting isn’t the only thing Hamel is good at. An accomplished actor, he starred in many Indonesian films in the 1980s. Also a prolific writer, Hamel has published 50 books, most of which highlight the rich cultural heritage of Indonesia.

“When it comes to art and cultural heritage, I think Indonesia is the most important country in Asia. Despite being colonised in the past, the nation still manages to keep its true spirit and traditions, which shape its unique identity. Every region has its own cultural aspect to showcase. My favourite one is Central Java. The province absorbs many foreign influences from Indian, Chinese and Dutch cultures, but remains very proud of its local values. Their batik and wayang are recognised internationally and they still have so much more potential that is yet to be discovered,” he said.

Jakarta’s art scene today is unquestionably very different from the time when Hamel first set foot in the city. The emergence of many new galleries in the past few years signals the dawn of a new era in Indonesia’s creative industry.

“We have more artists now and many of them are very determined to create something new and original. The difficult part is in making the selection. When curating, I must like the artwork regardless of the artist behind it, so I must admit that I’m a bit selfish about this,” said Hamel who has curated thousands of exhibitions.

Aside from organising exhibitions and writing books, these days Hamel is also busy preparing for an upcoming pop art solo exhibition to mark 70 years of his existence, scheduled to take place later this year.

“It will be a funny exhibition. My paintings are filled with intellectual humour and sarcasm that expose social issues today. There will be 30 paintings to exhibit and I’ll keep you updated about this,” he said.