A few weeks ago, just as news that the Rijksmuseum is taking steps towards the repatriation of an estimated 1,000 stolen colonial-era objects in their collection, a curatorial team of a future exhibition about the Indonesian Revolutionary War at the museum to be held a couple of years from now, have been digging into relevant historical and cultural objects of various museums and institutions in Holland to select works to show in the exhibition.

While there may be numerous museum artifacts related to Indonesia in Dutch museums, among them there is only a limited number of fine art works created by Indonesian artists. Unfortunately they are seldom, if ever, showcased in the museums. The curatorial team of which I am also a member were of course very excited to have an opportunity to look into these artworks.

We found that in the custody of the Royal Institute of the Tropics, there three paintings by prominent artists of the young republic. Hendra Gunawan’s  painting, dating from 1949 shows two guerillas, one placing his rifle on the other’s shoulder. Although the surrounding atmosphere seems calm, the two men appear alert and ready, as anything may emerge so suddenly. A painting by Affandi, depicts the artist and his daughter Kartika surrounded by ravens. The artist is grabbing one of them. No date can be found, but it appears to have been painted between 1950-51, when the artist was in India. Apparently, the painting was a gift from the STICUSA (Stichting voor Culturele Samenwerking or Foundation for Cultural Cooperation) in the 1960s. In the catalog of Affandi’s exhibition at the Balai Budaya in 1955, there a mention of the foundation’s Amsterdam’s headquarters as one of the institutions in which the artist’s paintings exist, and there is a possibility that this painting had been acquired by the Sticusa since the early 1950s.

Another Affandi is a very interesting self portrait, which shows the painter appearing to be rather unhappy or even disturbed. Below the inscription of the painting’s title, “peladjaran moeka tida’ senang” (The Dissatisfied Face Lesson), signed with the artist’s monogram and date ‘48, the artist inscribed again “belajar expresi moeka tidak senang” (“learning about the unhappy face expression”) as if the artist needed to emphasise his dissatisfaction yet once again. It would be telling to know where this painting came from, especially since it was made during the time of war.

At a depot of a religious institution, there is a Basoeki Abdullah painting of Mary as a Javanese lady  dressed in traditional Javanese attire, ascending to heaven (Ascension of Mary) above a Javanese landscape between Mt. Merbabu to the left of the canvas and the active Mt. Merapi to the right. The painting is dated 1935. Apparently Basoeki Abdullah was sent to study art in the Netherlands by the Jesuits, and while in Holland he painted and presented this painting to the institution as a token of gratitude.

Reproductions of two other paintings that seemed to be later versions of the Ascension of Mary painting, evidence that more versions were developed by the painter, adding a dragon and later the Holy Trinity. A complete version appeared in the Dutch Indies magazine d’Orient, in its Christmas edition, 1938. Although these painting are not directly relevant to the period discussed in the exhibition, they do provide an interesting background in understanding Basoeki Abdullah.

The painter was quite an interesting figure who oscillated between Indonesia and the Netherlands. Back in Jakarta in 1945, he made sketches of Sukarno at the famous Great Assembly at the IKADA Square. The following year he returned to the Netherlands where he painted and made illustrations for story books. In early 1949 he painted Queen Juliana, and later during the Round Table Conference, the negotiations which ended the Dutch rule in Indonesia, the painter painted the key figures of the conference. The artist’s pastel on paper of  Mohammad Hatta, the head of the Indonesian delegation, remains in the family estate of the former Vice President. To mark the transfer of sovereignty to Indonesia, Basoeki Abdullah painted a dynamic depiction of Prince Diponegoro dated 27 December 1949, the very date of the historic day. This painting is now in the collection of the Indonesian Presidential Palace. 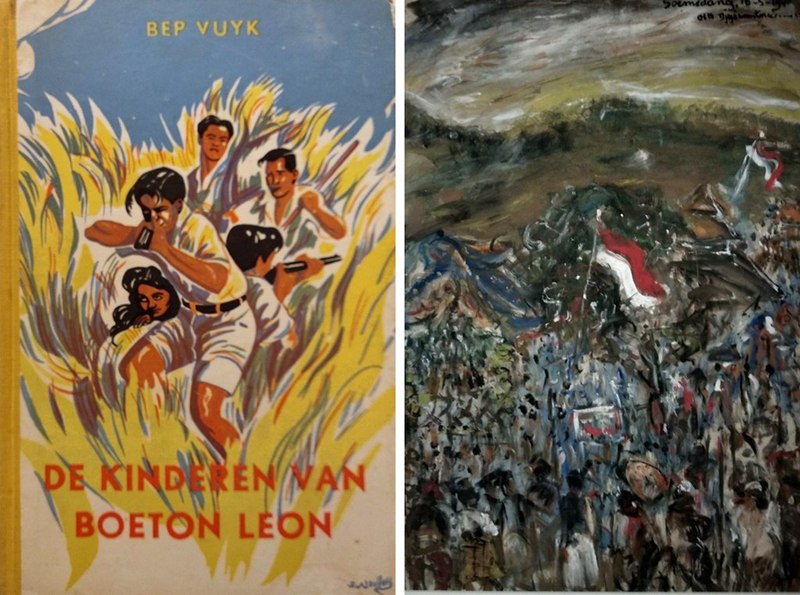 We also viewed Otto Djajasuntara’s Rapat Raksasa di Soemedang (Great Assembly in Sumedang) at the residence of Peter Schumacher, a veteran journalist who lived briefly in Jakarta in the 1970s. According to an Indonesian news article from 1947, the painting was purchased by van Randwijk of the Indonesia - Netherlands Association during Van Mook’s visit to the exhibition of the brothers Agoes and Otto Djaja at the Gedung Gadjah (currently the National Museum). At the time, Henk van Randwijk was the chief editor of the Vrij Nederland (Free Netherlands) newspaper. For many years the Great Assembly in Sumedang painting adorned the walls of the journalist’s house. In 2004 his widow decided to donate it to Vrij Nederland and it was displayed in their office. In 2015, when they moved office, the custody of the painting was handed over to Peter Schumacher.

Later in 1947, the Djaja brothers visited Holland and exhibited at the Stedelijk and Gemeente Museums. While the Revolutionary War was happening between the Dutch and Indonesians, various events promoting Indonesian art and culture were staged in the Netherlands. We hope to continue our exploratiothrough the collections of other museums as well as personal collections and tell many untold stories of our shared history.