A few years ago, edible art seemed to gain popularity. In 2014, the Edible Masterpieces project was launched as a fundraising initiative by Britain’s Art Fund, an institution that supports museums and galleries in the United Kingdom. It challenged members of the public to create food inspired by their favourite artworks to raise money for museums and galleries. The following year they held a competition in search of the Ultimate Edible Masterpiece of 2015. A fine art student’s recreation of Michelangelo’s Creation of Adam from the Sistine Chapel fresco, composed of satsuma citrus fruits, won first prize.

In 2015, two interns of The Met (Metropolitan Museum of Art)’s Media Lab created the Edible Met, a do-it-yourself food-grade moulding and casting kit that turns 3D-printed objects into edible items. The same year The Gallery at Munro House in Leeds, UK, held The Great Edible Art Exhibition, staging cakes made after famous artworks.

Perhaps edible recreations of some Indonesian masterpieces have been made as well, and perhaps some Indonesian artists have also created edible art, but I thought that the most favourite real-life food recipes of some artists would be more exciting to explore.

Among Shawnee Puti’s favourite food, she decided to present Pekasam Durian, which is a Melayu (not to be confused with Malaysia) dish. Dutch-born Indonesian artist Mella Jaarsma has created installations involving food, which might or might not be edible. She offered Bayam Keju, which is her adaptation of Dutch creamed spinach, made using bayam, the local version of spinach. Ceramicist Lie Fhung presents her super simple and easy to make All-in-One Meal, which packs enough nutrition to make a complete meal and tasty! Sculptor Teguh Ostenrik features a pork dish he calls Pok Pok Curry. Lala Bohang offers Binte, a dish from Palu, Central Sulawesi, from where her family originates.

ll the other dishes presented here are quite simple and easy to prepare in a relatively short time, so you should be able to try to cook them yourselves. As you start preparing the dishes, rather than worrying about how many exact grams of onions or millilitres of water you need, you should use your heart in measuring approximately how much salt or cheese to use. Remember, that cooking is after all more of an art than a science! Enjoy the food! 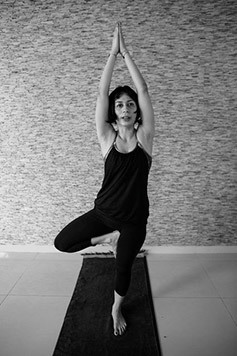 Shawnee Puti’s Pekasam Durian
Take the flesh of a ripe durian fruit, and place it in a jar. Add some salt and tighten the lid. After one week,open it and stir evenly. Separately, grind some green bird’s eye chili peppers using a stone mortar and pestle to make sambal ulek. Mix it with the durian, and the dish is ready to be served. 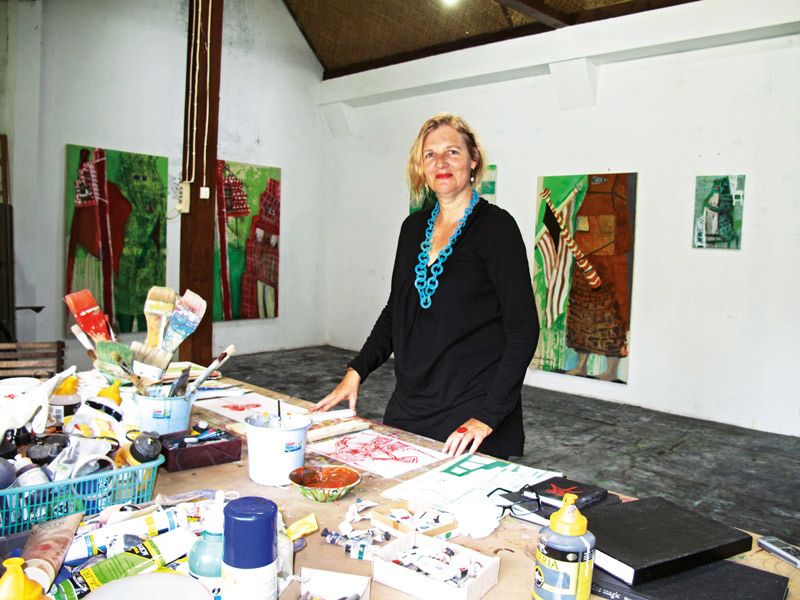 Mella Jaarsma’s Bayam Keju (Cheese Bayam)
Prepare a bunch of bayam (Amaranth leaves or Chinese spinach) for each person to be served. Use only the leaf part, and clean it three times. Put it in a pan with a lid. Add as little water as possible, perhaps a few table spoons would be enough. Boil for about 10 minutes in the pan with the lid closed, until the bayam is soft. Then pour the water out. Take a sharp knife and cut the leaves into small pieces. Add some salt and pepper, and grate some nutmeg over it. It Is better not to use nutmeg powder. Then add a generous amount of grated cheese. Mix everything. The cheese will melt. The dish is ready to be served. It is best eaten with fish and pasta. 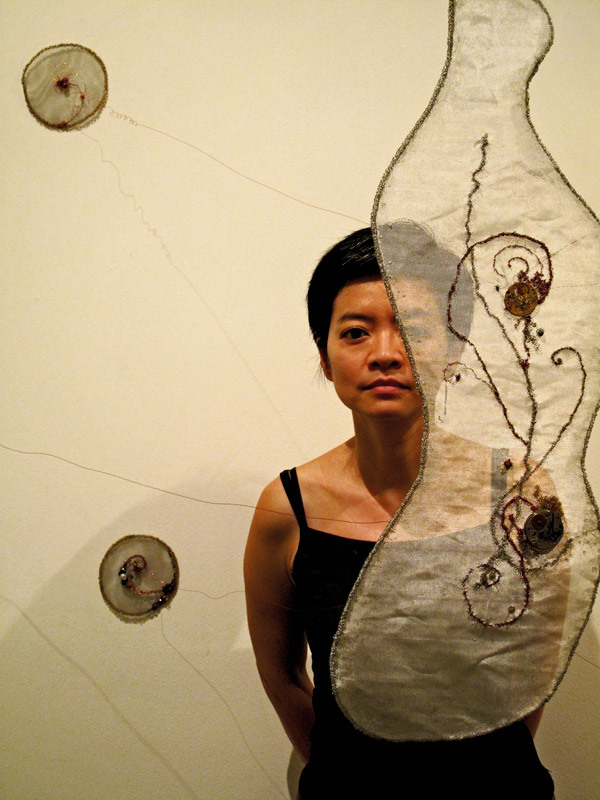 Ingredients (amounts according to your needs and taste):

Preparation: Heat the oven to 175ºC. While waiting for the oven to get hot, cut the potatoes, pumpkin, carrots, broccoli, cauliflower and crimini mushrooms into bite size. Put them each in their own container. Peel off the garlic, separate them.

Mist the oven pan with olive oil lightly, and place the potatoes, pumpkin and cauliflower into the pan. Put the pan into the oven. Leave it for about 8-12 mins, or until the potatoes are half-cooked. The smaller the pieces, the sooner they got cooked. Take out the pan and add in the carrots, crimini mushrooms, and garlic pieces. Sprinkled some salt, pepper and dried herbs if you prefer. Shake the pan so all the pieces are randomly mixed. If you would like to add the tuna or salmon chunks, you should do this now.

Put the pan back into the oven. Leave it for another 8-10 minutes, or until you can smell the garlic cooking. Take out the pan, and add in the broccoli. Squeeze some lemon juice all over if you like, and sprinkle some chilli flakes to taste. Put it back into the oven, and leave it for another 6-12 minutes, or until the broccoli is cooked. You may leave it longer to get crispy baked vegetables, but might sacrifice your tuna or salmon chunks if you added them. Turn off the oven, take out the pan and that’s it! You have your nutritious, all-in-one meal in no time! 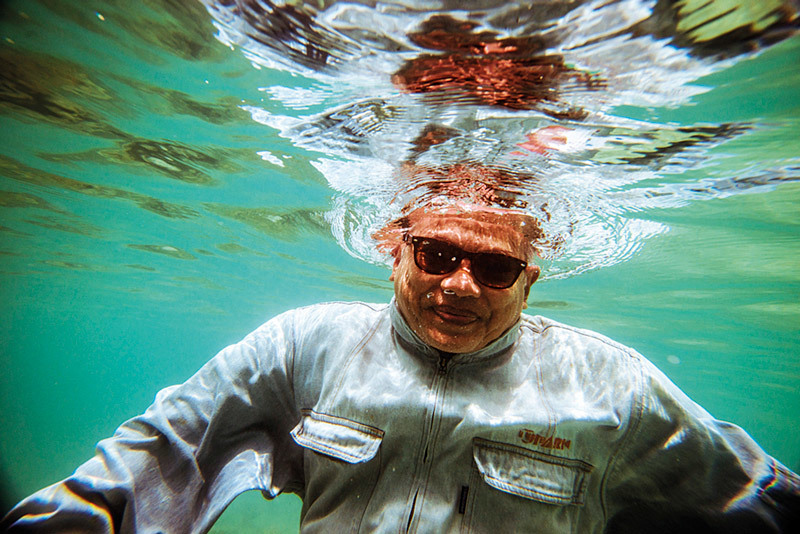 Teguh Ostenrik’s Pok Pok Curry
Boil a kilogram of pork ribs along with some ginger, lemongrass, bunga lawang (star anise) and cinnamon. First, boil them until the water is at its boiling point, and then set the flame on low and continue to boil it for about one and a half hour. When the meat has turned tender, add some Indian curry powder. Separately, also boil a pumpkin. After it is soft, blend it using a blender. Serve the curried pork ribs with the pumpkin sauce. 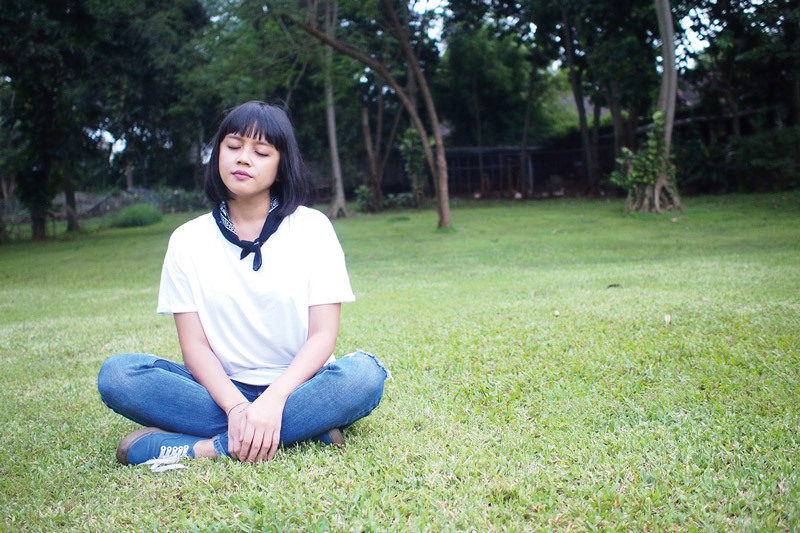 Lala Bohang’s Binte
Ingredients (for a portion suitable for  2-3 persons):

First of all, boil the corn until it is tender. Mix in the eggs with the stock. Dice the tomato, and finely chop the celery and scallions. Add the tomato and celery into the mixture. Separately, grind the chili and pour some hot cooking oil over it. Then add the finely chopped scallions, the oiled chili and the fried onions with the corn. The Binte dish is now ready to be served. You can eat it with other lauk, such as tempe or roa fish. Adding some prawn or fish kerupuk crackers would make it taste even better.