Indonesia's Emerging Artists in the Spotlight

Get to know who’s who among Indonesia’s emerging artists by attending Cultural Experience, a fine art exhibition that takes place at South Jakarta’s Arjuna Café, from 10 February to 10 March. The exhibition is delivered by Jakarta Illustration Visual Art (JIVA), an independent art organization, and curated by Frigidanto Agung, one of the country’s top art curators. 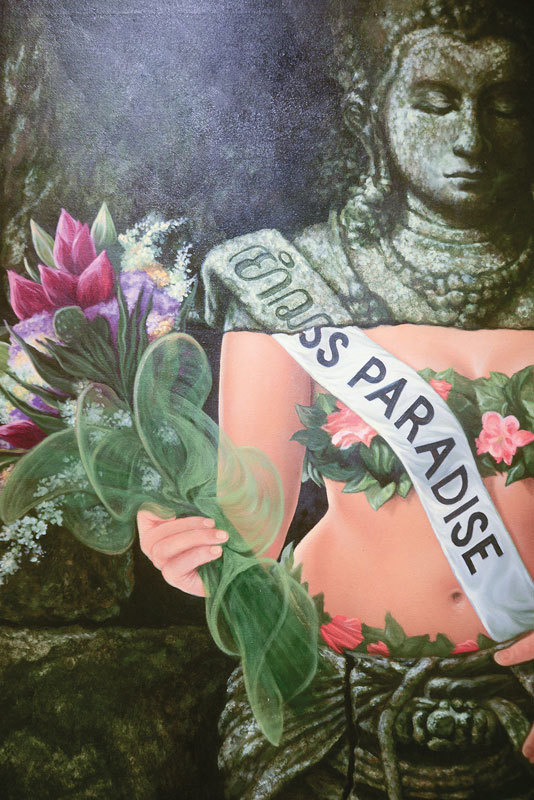 On display are 19 works of art by 12 talented local painters, which include JIVA manager Ghanyleo (Ghany), Ponk-Q Hary Purnomo, Edy Kuken, Afianto and Ulil Gama. The exhibition is both a reflection of the artists’ thoughts and a unified mission to use art to minimize heightened political tension.

“Look at the regional election in Jakarta with all the turbulence and chaos it has caused even before the election itself takes place. That’s also responsible for this situation. We believe that unlike politics, which divides people, culture can actually bring people together,” Ghany told NOW! Jakarta at the event’s official opening. 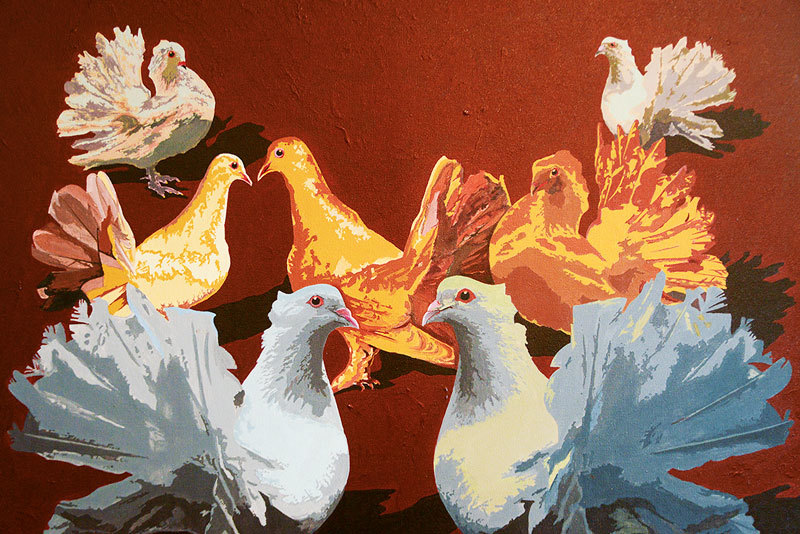 “Cultural Experience is our third exhibition and it’s actually a follow-up from the previous exhibition in 2016 entitled Legenda  Nusantara (Indigenous Legends), which was held at KOI Gallery, Kemang, South Jakarta. Legenda Nusantara was inspired by the fact that many of us are not familiar with our own folklores and legends. This was something I noticed during my study at the university. My friends back then didn’t know much about those tales. I don’t want our folklores to disappear. They need to be preserved.”

Although initially reserved for Jakarta-based painters, JIVA later decided to embrace promising artists from cities across Java, Bali, even Sulawesi. 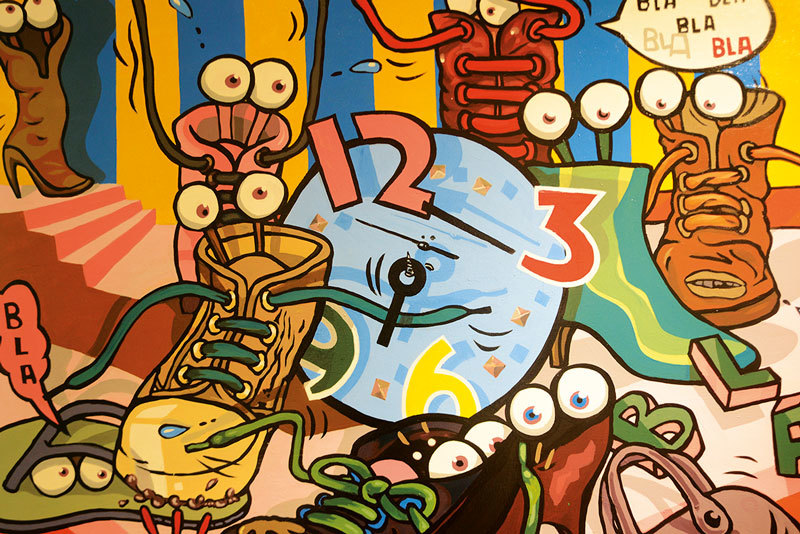 “Each artist gets to display one or two paintings but in the case of Munte, who is relatively new in the Indonesian art scene, he’s allowed to display as many as six paintings in order to help him get more recognition. However, due to limited space, we can only display a total of 19 paintings,” said the 24-year-old artist.

The paintings displayed at Cultural Experience convey a wide array of profound impressions of Indonesian cultural heritage and natural beauty. Take a look at Ghany’s Zamrud Khatulistiwa (Emerald of Equator), which portrays a green-dominated hidden tropical jungle and waterfalls with a big Buddha statue in the back and a Sumatran elephant. Hendrikus David Arie’s Baratayudha War comes in the form of a black-and-white picture sketched with pens on a large piece of paper, depicting the gory violence of the ancient legendary war. Meanwhile, Akbar Linggaprana’s Bedhaya Arjuna Wiwaha presents the grace of four traditional Javanese dancers dancing in the dark. 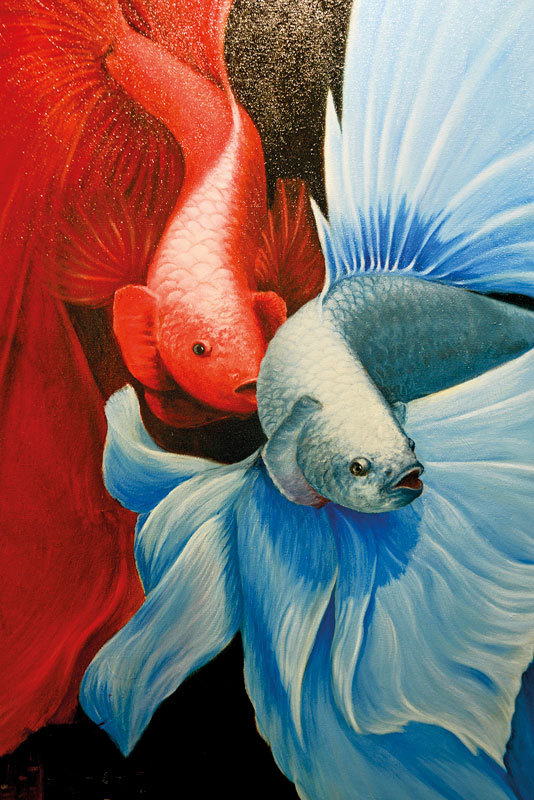 Some of the showstoppers are paintings by Majene-born Syis Paindow called Apsara Fantasy (Miss Paradise) and Apsara Fantasy 2 (Expecting Arjuna Jr.) – both of which present a surreal blend of Borobudur relief and human body. Apsara Fantasy shows a lady holding a bouquet of flowers, with parts of her body (head to shoulders and waist down) depicted as detailed carved relief stone.

In Apsara Fantasy 2, we see a pregnant goddess holding her stomach and a vague shadow of baby Arjuna inside her womb. Just like the first painting, parts of the goddess’ body are also pictured as detailed carved relief stone while the rest is “made of” human flesh.

“To give this [second] painting a modern twist, I added a piercing on her belly button,” Syis chuckled. “Borobudur Temple has inspired me and I like mixing its relief and human beings because it’s like combining the past with the present.” 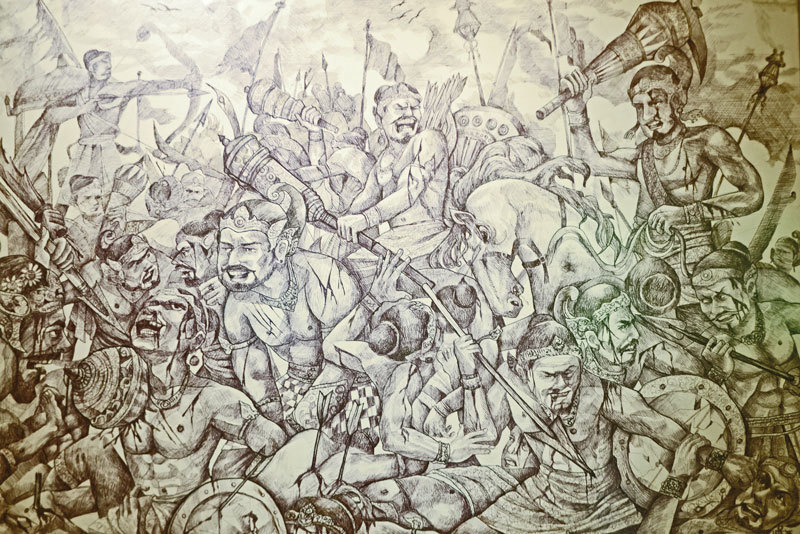 The selection process took up to three weeks. It was a process that sought to match the quality and style of work with the standards imposed by JIVA. Throughout the process, the curator admitted to trying to get into the minds of the artists to understand the way they think.

“I call this process a ‘picnic’ because artists always take the time to have a picnic with their minds, thoughts and imagination about what to paint. Only when they have found the perfect idea, will they start working on their painting,” Frigidanto explained.

JIVA was established in January 2015 and started to gain recognition within one year of its operation. Its inaugural art exhibition was entitled Time & Memory, held in January 2016 at Kafein Barresca Café in South Jakarta. The second exhibition, Legenda Nusantara, followed several months later. The organization is committed to guarding the authenticity of local art. It also plans to consistently stage at least one art exhibition every year.