Lost at Sea Now Displayed at the Galeri Warisan Maritim

The Indonesian Heritage Society (IHS) trains a group of volunteers to become guides at the Museum Nasional every year. Among the topics covered is ancient Chinese and Southeast Asian ceramics found in Indonesia, of which the museum has an extremely rich collection. Recently IHS members have updated the training material on ceramics and are preparing a comprehensive database of the more than 1,000 ceramic objects on display in the museum.

To place these ceramics in a broader perspective, they also look at other collections with similar material in Jakarta, one of these being the collection of the newly established museum Galeri Warisan Maritim, or the Maritime Heritage Gallery.

The Gallery is located in an unlikely place for a museum of antiques, on the second floor of the brand new office tower of the Ministry of Maritime Affairs and Fisheries. Located on a dead-ended side road off Jalan Merdeka Timur tourists may have difficulty to find the place, there are no signs along the road and the name of the Gallery is not even mentioned on the building.

But inside one is surprised to see such bright and well arranged displays. The exhibits come from the cargo of three ancient ships that perished in Indonesian waters: the 9th-century Belitung or Batu Hitam wreck, the 10th-century Cirebon wreck and the 13th-century Pulau Buaya wreck. On display are mainly Chinese ceramics from the Tang and Song periods, but also Southeast Asian earthenware, metal objects, bronze statuettes, some Near Eastern glass bottles, beads, coins, and so on. The bilingual labels are clear, though sometimes a bit short, but there are also leaflets and audiovisual material available for further explanation. On the same floor a library is being set up for visitors who want to delve deeper. However, don’t expect to see here those bright, shining blue and white or polychrome porcelain pieces as in other museums! All objects displayed have rested for centuries on the bottom of the sea and this has left its mark: most items look grey and dirty and most of the original glazes have gone.

Belitung wreck
This is the earliest shipwreck found in Southeast Asia, an Arabian dhow from the 9th century, On its way back from China it apparently wanted to visit Java but perished in the shallow waters between Bangka and Belitung islands. It is also called the Batu Hitam wreck, or the Tang wreck after the then reigning Chinese dynasty. The wreck was accidentally found by fishermen in 1998 about 1.5 km from the shore in 16 m deep water. 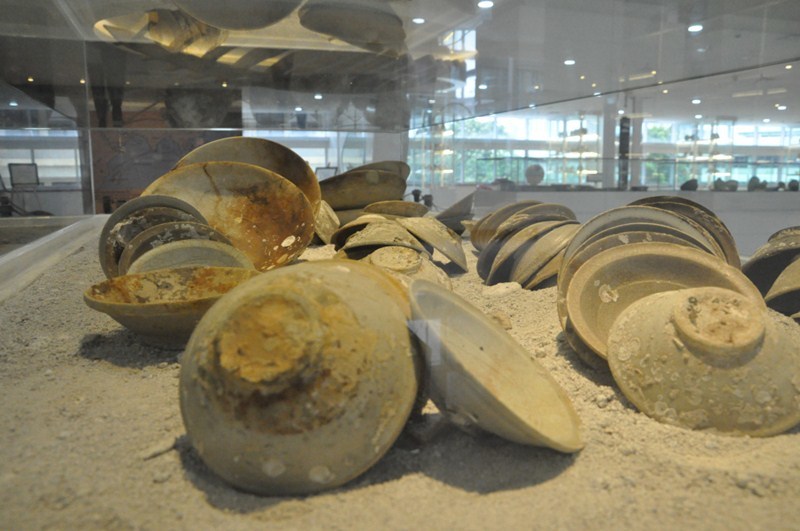 Remains of the wooden hull showed that the wood came probably from northeast Africa, and that the planks were sewn together without the use of nails. The cargo was scientifically salvaged though in some hurry to beat the looters. Besides perishable material like spices it contained nearly ten tons of lead ingots, 60,000 Chinese ceramic pieces, hundreds of ink bottles as well as jewellery and some beautifully decorated gold pieces. A large part of the cargo was sold to Singapore and is now on display in the Asian Civilisations Museum there, in a new wing especially built for the purpose. Fortunately a part of the ceramic cargo has been kept aside and is now displayed here. It consists of many mass-produced yellow-brown Changsa bowls and ewers as well as jars in which the smaller wares were often packed for transport.

Cirebon wreck
Discovered in 2003 in the Java Sea northeast of Cirebon, the wreck was excavated in 2004 by a private company in close collaboration with the Indonesian Government. From the remains of the ship it appeared to be an Indonesian vessel probably used for the inter-island trade. It may well have picked up its cargo in one or more of the Sriwijaya ports, and then headed for Central or East Java. 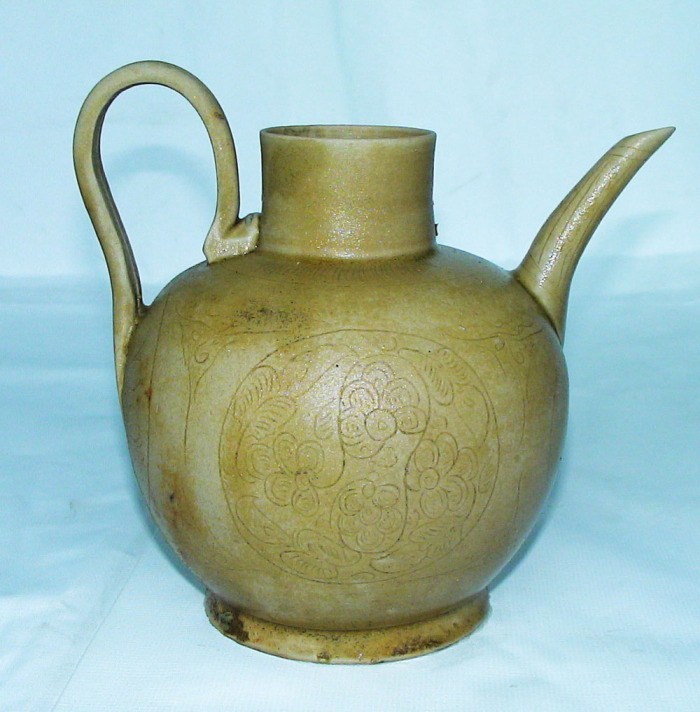 Some 250,000 artifacts were brought ashore, the majority ceramics, in addition to Near Eastern and Indian glassware, crystal, gemstones, jewelry, and various metal objects like ingots, bronze mirrors, and implements used for Buddhist ceremonies which may have been made in Sumatra. A large part of the ceramics consisted of Yue ware, an early type of porcelain from Zhejiang Province in eastern China, and white ware, possibly from Henan Province. The wares include many globular pots with characteristic lotus decoration, bowls, ewers, saucers, small covered boxes, and jars. In addition, there are many pieces of high quality so-called fine-paste earthenware like kendis, vases, bowls, figurines shaped like birds or deer, etc. Based on a factory mark on one of the ceramic pieces, as well as a Chinese coin, experts have dated the ship to 968 AD during the Five Dynasty Period in China.

Pulau Buaya wreck
Pulau Buaya, literally meaning Crocodile Island, is a small island in the west of the Lingga Archipelago, southeast of Riau Province. It is the youngest of the three ships highlighted in the museum, probably from the 13th century, but it is also the most deteriorated. Found in 1989, not much remained of the hull and the type of vessel could not be determined. Much of the ceramics on board were broken or severely affected by the saline water. The wreck was salvaged by commercial divers who collected some 31,000 artifacts but who did not care much about proper documenting their finds. Nevertheless, the diverse cargo is very interesting and consists mostly of utilitarian ware for daily use rather than luxury items for the ruling class. The potteries, including beautifully shaped kendis, date from the 12th and 13th century, or the Song and Yuan dynasties, and were almost all produced in Guangdong Province in southeast China. Like the Cirebon wreck, the ship also carried glass bottles from the Middle East, as well as metal objects and ingots of lead and tin. A stove of a type well-known in Southeast Asia at the time may have belonged to the ship’s crew.

Altogether, the displays give a very interesting picture of the trade going on about a thousand years ago between China, Southeast Asia and the Middle East, long before the Europeans started their long-distance travels. Although one might have liked some more information on the whereabouts of the rest of the cargo salvaged from these three ships wrecks, this does not in any way diminish the value of the Galeri Warisan Maritim, a great initiative of the Ministry of Marine Affairs and Fisheries.  At last, a part of the famous Tang cargo is now on display in Jakarta— no need to go to Singapore for this anymore!