Museum of Modern and Contemporary Art in Nusantara debuts two exhibitions in 2020 that muse the audiences through enthralling performances from Indonesian artist Melati Suryodarmo and multimedia installation on Julian Rosefeldt’s Manifesto.

Performance art and video art have its standpoints that define the history of contemporary arts that contribute to the progressive turn in the current art movement today. It’s likely, the reason that brought the Museum of Modern and Contemporary Art in Nusantara (MACAN) to juxtapose two exhibitions of “Melati Suryodarmo: Why Let the Chicken Run?” And “Julian Rosefeldt: Manifesto” in the same schedule, putting them side to side to provide a lineal experience that will open further dialogue about contemporary arts.

Radical Break, a private contemporary art collection from Museum MACAN is also being exhibited at the venue along with two exhibits, as a preamble to capture the annals of the contemporary practice before one discovers the artistic works from two contemporary artists through the live performance and video presentation. 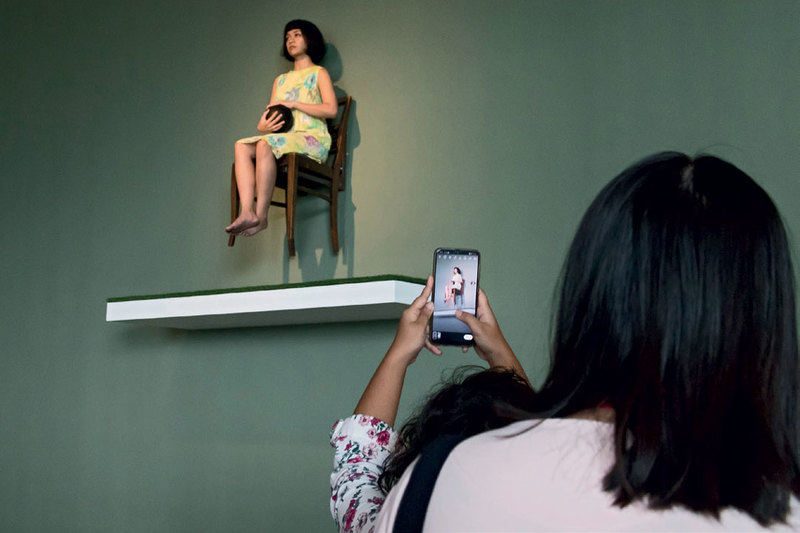 Berlin-based artist Julian Rosefeldt’s which feature transformative monologue by Australian actress Cate Blanchett are distinct pieces, but couldn’t be more different, with both of them articulating their artistry through a performative and live experience outside traditional formula in the gallery setup, allowing the audiences to decode the figurative embodiment from piece to piece.

“The special thing about these two exhibitions is the conversation between both practices, performance art and video art which becomes the cornerstone of contemporary art practice. It’s a rare presentation that the public can see here. We hope that developing and presenting ideas from globally-relevant artists will strengthen the dynamism of the Indonesian art scene,” Aaron Seto, the Director of Museum MACAN said.

Both are spirited with one entity, the body of work which illustrates by the human ability to deliver the art itself, from facial expression, intense characters, to the use of verbal language as the most sophisticated technology of communication today. There is nothing closer than human-to-human experience. 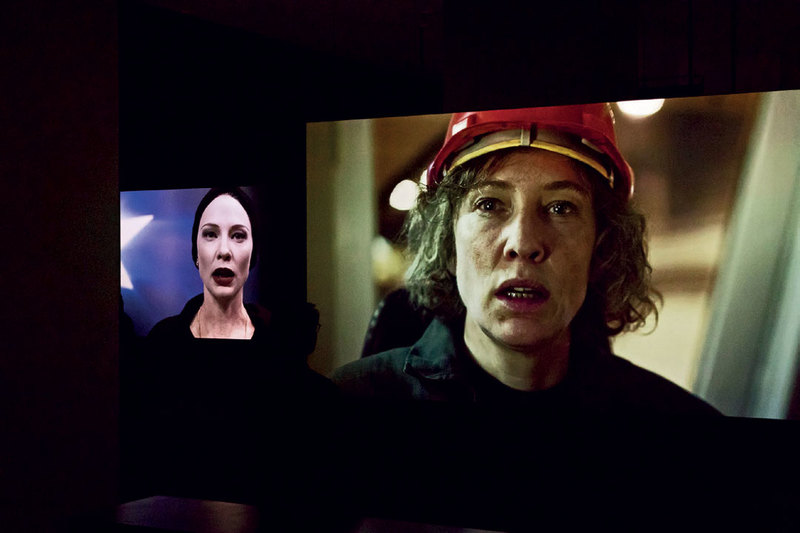 Known from her influence in adapting Javanese tradition and Japanese dance theatre, Melati Suryodarmo is amongst therare personalities in Indonesian art, an internationally acclaimed artist who leads her way to her first solo exhibit at Museum MACAN, presenting 12 highlighted works from over 20 years of experience in performance art. Performed by herself with the help of supporting performance, Suryodarmo provides a wide range of art presentations in different corners of the room, ranging from 15 minutes to 12 hours long performances in over 13 weeks. She spent part of her life studying art in Germany, Suryodarmo has become the daring yet radical individual who likes to challenge herself in exploring the physical conversation, using the lifespan of the determined duration to understand the transformative state of psychological being in responding to socio-political surroundings of human lives.

As one enters the exhibit, people will recognise the woman sitting on a chair installed in the ceiling is Melati’s work The Black Ball (2005). Taken inspiration from 20th-century Austrian figurative painting Egon Schiele, the work is a performative revival of the traditional piece that provides the discourse about silence and availability of an occupation. She also performed her early work Why Let the Chicken Run? (2001) to the current stage, where Melati chases the rooster, inviting the audiences about a dream, contrasting the atmosphere of countryside with the urban realm. Other significant works can be seen from Melati’s I’m A Ghost in My Own House (2012) presented non-stop for 12 hours. 30 women performed Sweet Dreams Sweet (2003) as the response to social injustice, oppression to human rights and pluralism. 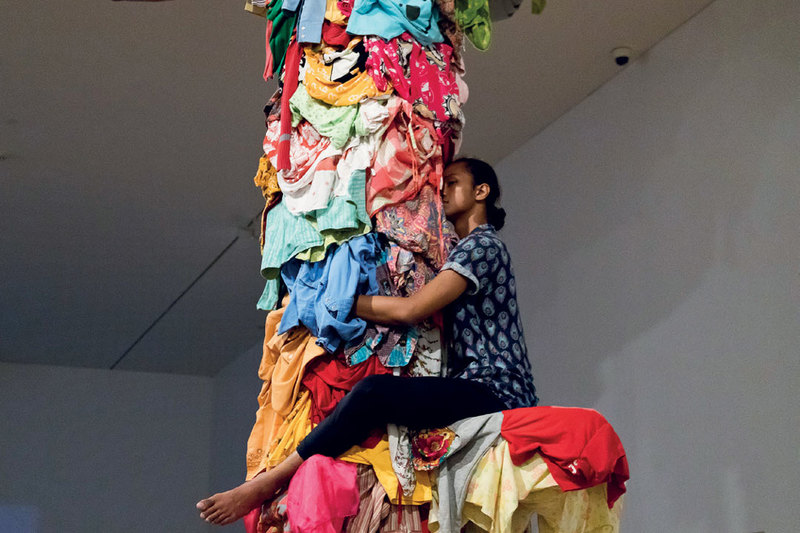 Aside from the performance, Melati Suryodarmo completes her art presentation with photography, video montage, and historical archive that become artefacts of her artistic process over the 20-year-long career. “It’s always been a body politics. As an artist, I perform with my own body and try to internalise something that I want to address, from issues around politics to social. I don’t want to be explicit and choose to let the audience take their time appreciating what’s in front of them,” Melati stated during the exhibit preview.

Inside a pitch-black room, Julian Rosefeldt offers a different atmosphere, inviting one to sit down and watch the Academy award-winning actress Cate Blanchett play 13 distinct roles in 13 channel films projected onto large screens. From watching each film, this multimedia video installation will give one a narrative impression to Cate Blanchett acting skills that portray the role, from the punk rocker, homeless, newscaster, to art dealer. Each character in the story recites the artist manifesto of the 20th century through the writing scripts of Situationism, Futurism, Dadaism, Fluxus, Supremacism, to Surrealism. 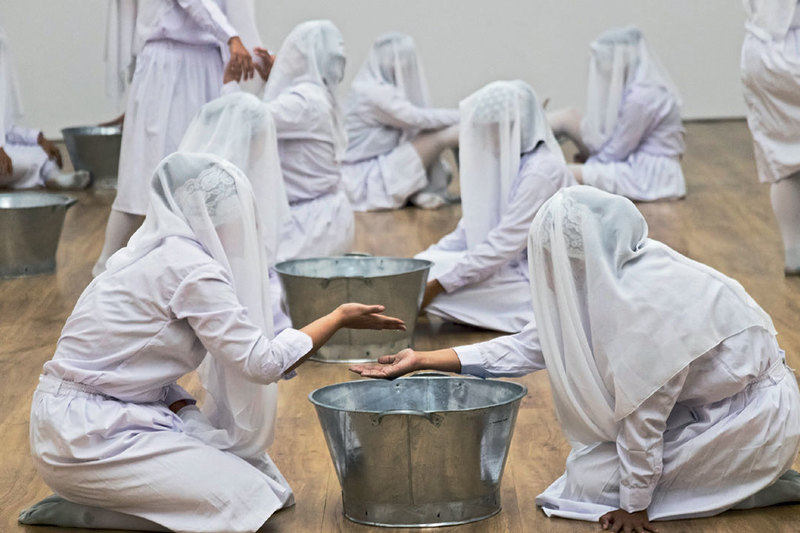 From a total of 54 manifestos, audiences in Jakarta get a chance to see the 13 pieces that cover the manifesto texts. For Rosefeldt, Manifesto is a homage to the artist Avant-garde movements, formulated in the visual literature, depicting the role of a group of artists from dancers to filmmakers that resemble in elaborative cinematography. While sitting in front of the screen, take a look at the surroundings during the last minute of the short movie where people will hear the mouthpieces chanting at the same time. This is the moment where one will consciously be aware of the power of the most influential text in history.

In Rosefeldt retrospect, ‘Manifesto’ explores the archive of history, picking up fundamental thinking of past artistic movements and searches its validity of the modern times that may amplify across cultures and times. “I want to see if these manifestos are still relevant in today’s society and look at it as if it resonates with what people feel about things today. Some of them are quite essential to our lives but I will let the audiences here see that directly,” Rosefeldt said.

Both artists’ works are on display at Museum MACAN until 31 May. For more information about the exhibition and running programmes from open lecture to an artist talk, visit the official website museummacan.org and engage yourself with digital art experience through social media @museummacan.