In preparation of the transfer of power from the nationalized colonies of the Dutch East India Company to the establishment of the Netherlands East Indies government at the end of the eighteenth century, a centre of administration was developed around four kilometres south of old Batavia (currently known as Kota) in Weltevreden (currently Menteng in Central Jakarta).

In this new area, several important buildings were planned around two main squares, which at the time were known as the Buffelsveld (“buffalo field” as it was a large open field used for herding kerbau or water buffaloes) and Paradeplaats (Parade ground) to its east. These squares only began to take shape during Daendels’s rule (1808-1811) and after Raffles’ rule in Java they became known as Koningsplein (currently Medan Merdeka or Merdeka Square) and Waterlooplein (currently Lapangan Banteng).

By the end of the eighteenth century, the cemetery for the Europeans in Batavia on the grounds of the New Dutch Church (Nieuwe Hollandse Kerk) (the site of the current Museum Wayang) on the western side of the city square (currently known as Taman Fatahilah) was already full. Therefore, in 1795, a new cemetery was opened in the vicinity of Tanah Abang, west of the Buffelsveld, to provide burial grounds for the Europeans who resided in Batavia. The cemetery was known at the time as the European Cemetery on Cemetery Lane at Tanah Abang (Europeanse Kerkhof, Tanah Abang). 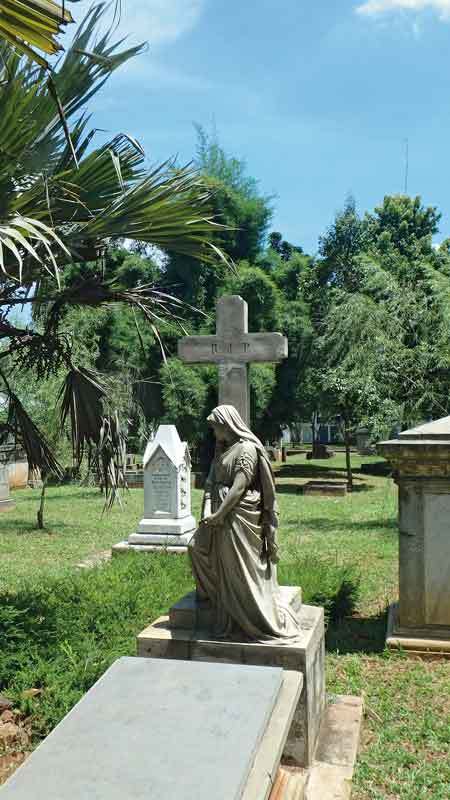 After Indonesian Independence it became known as the Kebon Jahe Kober Cemetery. In 1977, the cemetery was closed and turned into the Taman Prasasti Museum (literally translated: “monuments park museum”). It was meant to house the old gravestones from the ground of the New Dutch Church, as well as other historical gravestones and monuments of the city. Today it has a collection of around 1372 items. Among others are gravestones of prominent residents of Batavia, including Olivia Marianne Raffles, the first wife of Sir Thomas Stamford Raffles, the Lieutanant-Governor of Java and its dependencies, “who departed this life at Buitenzorg the 23 day of November 1814,” as inscribed on the gravestone.

Many figures who were instrumental in the establishment of the city’s cathedral were also buried here. Mon. Adamus Claessens (Apostalic Vicar of Batavia 1874-1893, † 1895) and Walterus Jacobus Staal, SJ (Apostalic Vicar of Batavia 1893-97, † 1897,) have notable in-situ graves. Staal’s tomb is reminiscent of a Gothic structure. The statue of Pastor Henricus van der Grinten, stands tall in the middle of the park. A lithograph by J.C. Rappard dating from 1881-1889 depicts the monument in its original site. Grinten was the provicaris of Batavia from 1854-56 and also the co-founder, with Mr. JR. Kleyn, in 1862, of the Vincentius Society for the care of foster children. 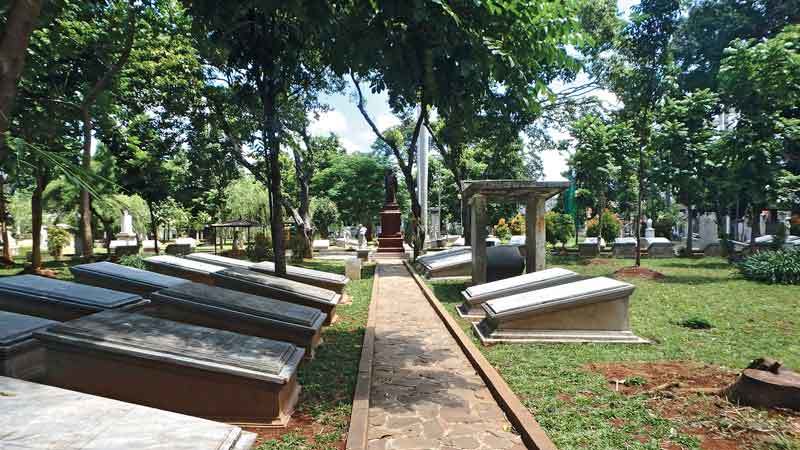 Marius J. Hulswit (1862-1921), architect of the city’s Neo-Gothic Cathedral which was built between1899 and 1901 is also buried in this cemetery. Interestingly, his grave was not modeled after the forms of the cathedral, but is a design that seems much more modern and simple. Perhaps this was because he died in 1921, in an era that was already quite different from the turn of the century when he designed the church.

The monument of Jan Laurens Andries Brandes (1857-1905), a Dutch philologist and lexicographer, who was the head of the Netherlands Indie Commission of the Archaeological Research on Java and Madura, is basically in the form of a lingga on a square pedestal that is ornamented with pediments reminiscent of the pediments crowning the Borobudur niches. The tombstone of Willem Frederik Stutterheim (1892 - 1942), who was a more famous historian, archaeologist and an official of the Archaeological Survey office of the Dutch Indies government, seems more modest. Most likely this was because he passed away during the occupation of the Japanese, and therefore there was no opportunity to be lavish in his burial. 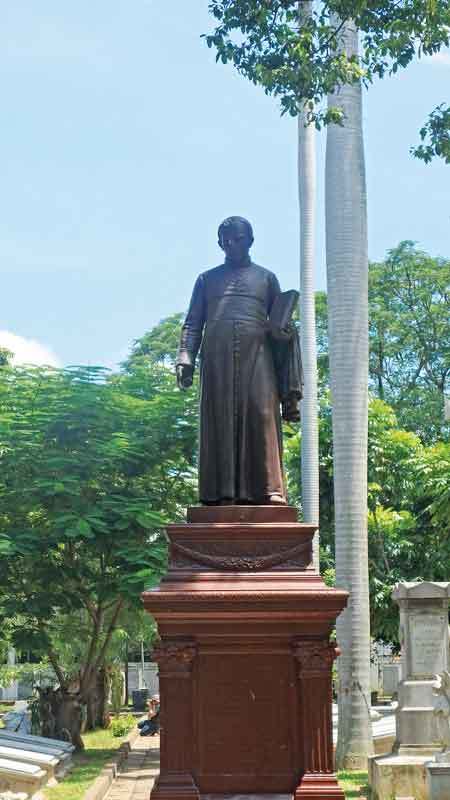 In the park there are many statues of cupids and angels that seem to have come from various graves. There are also two exquisite marble sculptures of weeping ladies, one standing and the other lying over a tomb. The latter is inscribed “Sculp A. Carminati Milano 1907”. Antonio Carminati (1859-1908) was a noted Italian sculptor whose works also appear in the Monumental Cemetery of Milan.

Among the graves of the Europeans there are also tombs of Chinese and Indonesians, including the tombstone of Miss Riboet (1903-1965), who was a famous opera singer of the Orion Troupe that was active in the 1920’s and 30’s and Soe Hok Gie (1942-1965) a prominent student activist in the 1960’s and author of Catatan Seorang Demonstran (“Diary of A Demonstrator”). 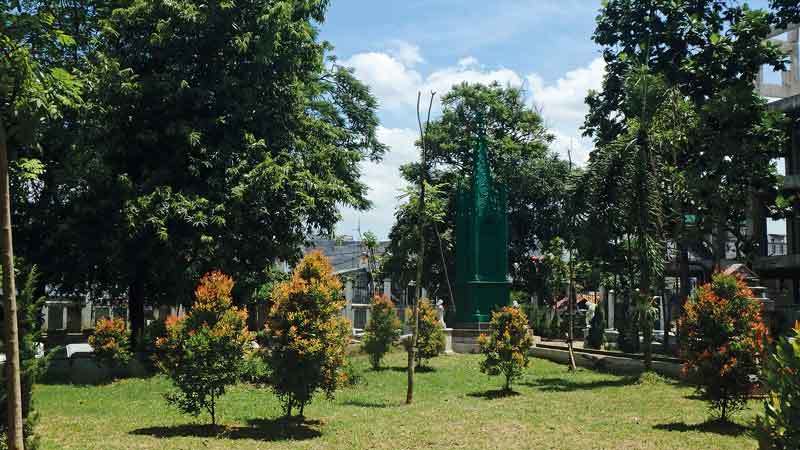 Many tombstones in the collection are marked ‘H.K.’ followed by a number, indicating that they originated from the grounds of the New Dutch Church. Other notable graves in the park include the obelisk shaped Monument of Lodewijk Launy (1793-1849), who was the Director-General of Finance of the Nederlands-Indies government. There is also the simple tomb of JHR Kohler, who passed away during an attack on Aceh in 1873. During the renovation of the cemetery in preparation for the museum, the Aceh government apparently asked that his remains be reburied in Aceh, where they also built a replica of his tomb.

In the park there is a monument of Mayor Jenderal J.J Perie (1788-1853), who was apparently the First Commander of the Great Military Division of Java. There is also the grave of General Major A.V. Michiels, a military leader of the Nederlands Indies government who was killed during a military expedition on Klungkung, Bali, in 1849. A heroic monument for his heroic merit, which seems reminiscent of J.J. Perie’s smaller monument, once stood on the grounds of the Waterlooplein in Batavia. While that monument has been demolished, his modest and peaceful grave still stands. 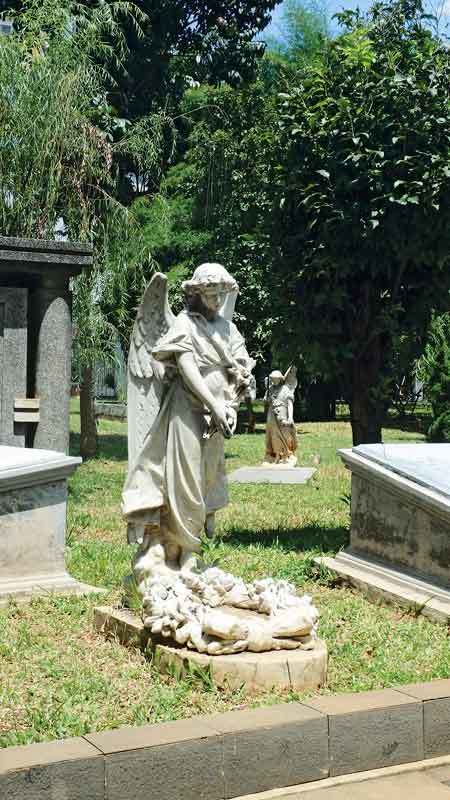 The park is a great place to visit and spend a nice morning or afternoon, whether on a weekend or on a weekday. Hopefully soon a database on all of the 1372 collections of the museum can be entered into a searchable database, so people from all over the world can find out more about their ancestors who may have been buried in Jakarta.

The individuals who have been buried to rest, or whose tombstones have been moved to the Taman Prasasti Museum have in one way or another shaped Jakarta’s or Indonesia’s history. From wherever they originated, on whichever side they have once stood, and whichever religion or belief they have embraced, all were human beings alike, all created by God Almighty, the creator of heaven and earth. While we continue our search for their histories in pursuit of knowing more about our enigmatic past, may they all rest in peace in this solemn park.