Our Motherland’s Melody: The Second Painting Exhibition of The Presidential Palace’s Collection

In August last year, the first painting exhibition of the Presidential Palace’s Collection was held at the National Gallery of Indonesia in Jakarta. Entitled 17:71 Gores Juang Kemerdekaan (“The Strokes of the Struggle Towards Independence”), the first exhibition featured many of President Sukarno’s highly publicized paintings, such as Sudjojono’s Friend of The Revolution as well as other well known paintings acquired by the Presidential Palace thereafter, such the Arrest of Pangeran Diponegoro by Raden Saleh. 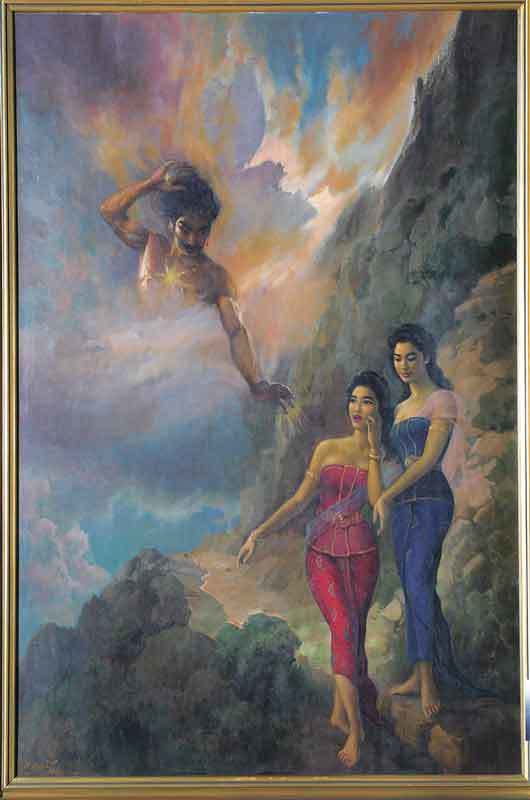 Therefore, to develop the second exhibition was quite a challenge for the team of curators. In addition to Mikke Susanto, who was one of the two curators of last year’s exhibition, Asikin Hasan of Komunitas Salihara, independent curator Sally Texania and myself were appointed as curators this year. As Mikke had previously worked on the collection, he already prepared a treatment for the exhibition around the notion of motherland with four themes: nature, daily life, tradition and mythology/religion and even selected thirty-three paintings that he considered suitable. 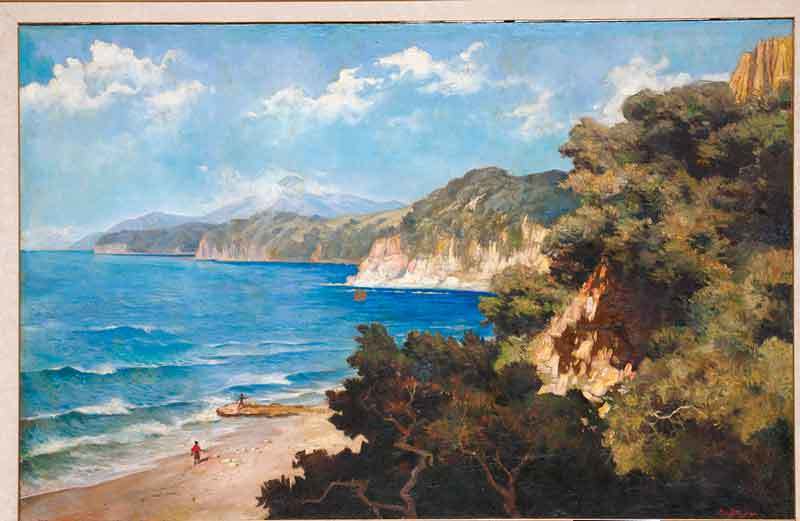 As the three “new” curators inspected the Presidential Palaces to view the paintings, the exhibition became increasingly clearer. When viewed singly many of the landscape paintings in the collection will most likely be considered as Mooi Indië, which was the term used to describe romanticized, idyllic depictions of Dutch Indies landscapes. However, when they are seen as a collection, we get a different view, which goes well beyond Mooi Indië. The landscape paintings in the collection seemed to have served as a window for President Sukarno to not only “see” the beauty of the Indonesian archipelago, but also to envision Indonesia as a nation, united in diversity. 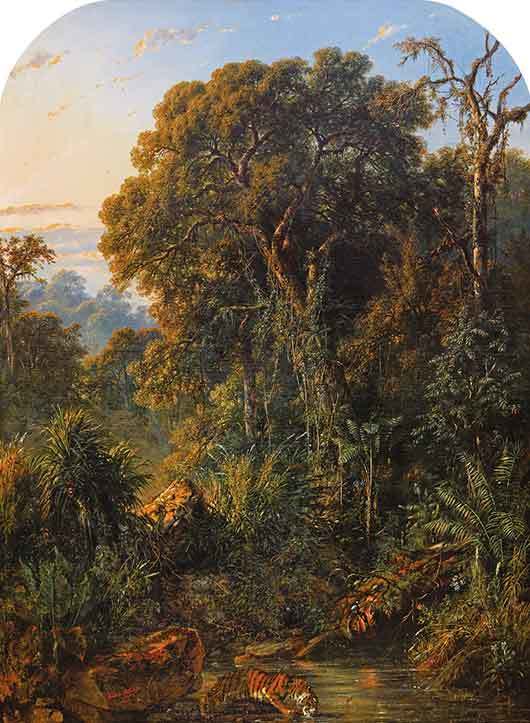 In the Bogor and Cipanas Presidential Palaces, the curators realized that many of the paintings in the collection portrayed women in kebaya. It seemed that Sukarno intended to champion the use of kebaya as a national dress for Indonesian women, as it would provide them with a national Indonesian identity while at the same time still be able to their regional/ethnic flavor through the style of the kebaya top and the patterns of the sarong bottom that they wore. We selected a number of paintings of women in kebaya by Soedibio, Barli Sasmitawinata, Trubus Soedarsono, Sudarso, Hendra Gunawan and Frida Holleman to show a glimpse of the breadth of the collection. 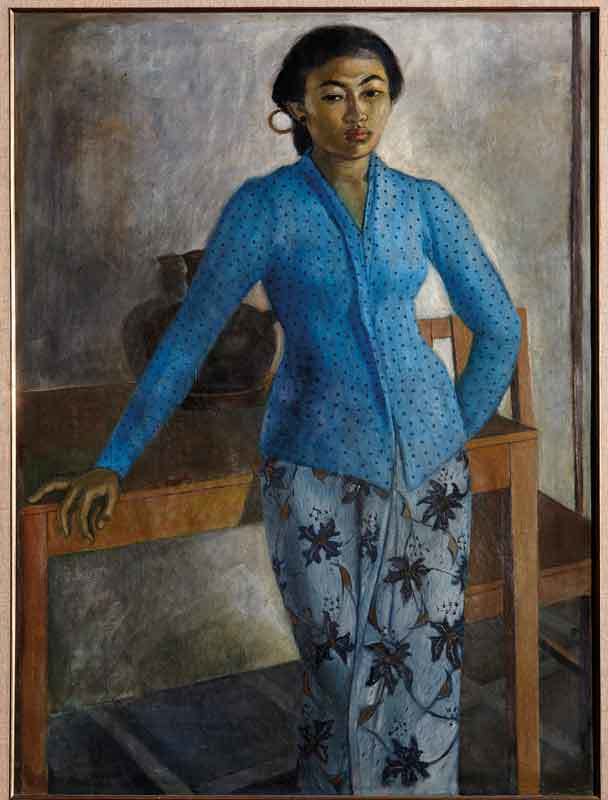 After exchanging some pieces and adding some other paintings to strengthen the exhibition, the show will present forty-eight paintings by forty-one artists. The exhibition opens with Basoeki Abdullah’s painting of Flores, which was a painting inspired by Sukarno’s watercolor of the same subject and almost the same view. Basoeki Abdullah himself is not known to have travelled to Flores. 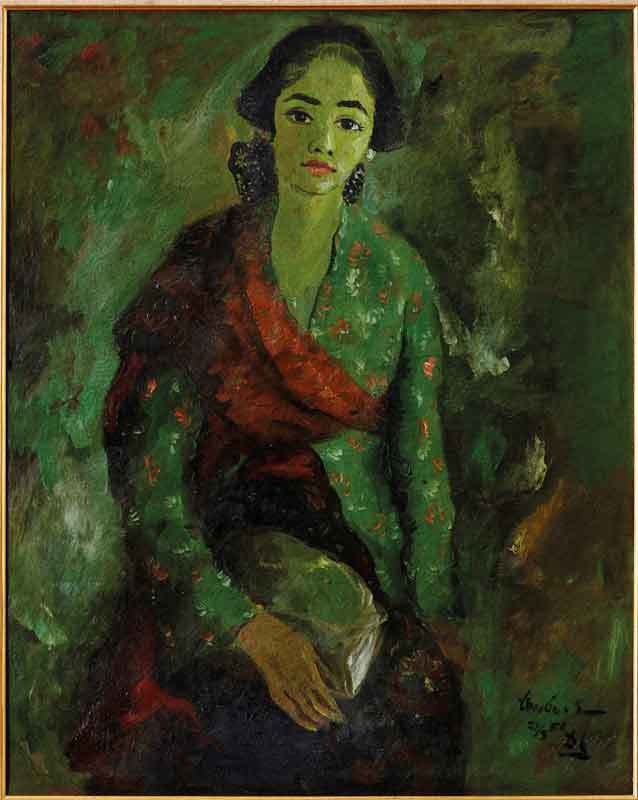 Raden Saleh’s Drinking Tiger will acquire a new frame to better suit its arched top and be an important part of this exhibition. Dating from 1863, it is the oldest work in the show. Viewers will be able to witness Romualdo Locatelli’s wonderful impressionistic brushstrokes in Harrowing a Field in Java and enjoy Kartono Yudhokusumo’s wit in his Sightseeing in Dieng. Connoisseurs of Indonesian art will be able to know and better understand Walter Spies’s work when they see his solemn Meditating in an Eleventh Century Balinese Rock-cut Temple, a particularly large painting by the enigmatic artist. 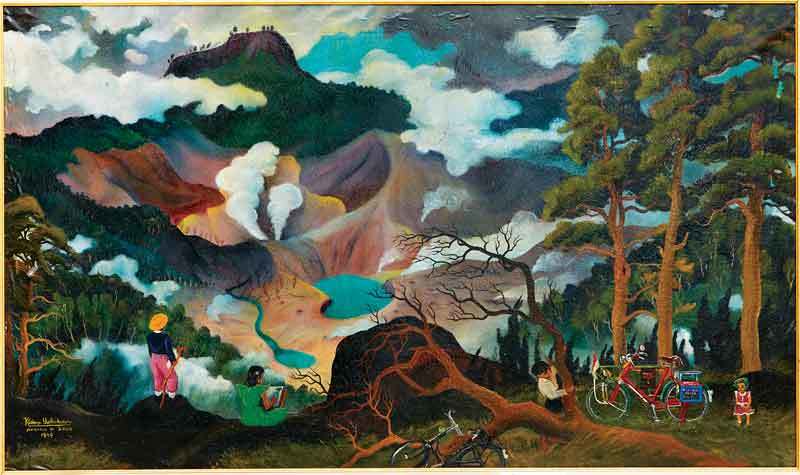 While only a limited number of people have the privilege to view Theo Meier’s Redjang Dance where it is usually displayed at the Bogor Palace, this August many more will be able to enjoy its elegant dynamism at the National Gallery. Basoeki Abdullah’s hauting Nyai Roro Kidul, Queen of the South Seas will attract those fascinated with mysticism and stories of fright and horror. Concluding the exhibition, If God Gets Angry, Basoeki Abdullah’s 1949 appropriation of John Martin’s The Great Day of His Wrath (1851-3) will serve as a reminder of how small and helpless we humans actually are in the presence of God.

While a few of the paintings were gifts or acquisitions thereafter, most of the paintings presented in the show do come from the time President Sukarno was in power. Even Sukarno reminded us, to “never forget history”. Looking into the past is never a foolish act, as it leads us to understand and face the challenges of today and tomorrow.