The Art of Modern Calligraphy

Ever since emails and instant messaging through smartphones have become our main tools for communication, handwriting has become less and less important, let alone good penmanship. Unfazed by this development, Veronica Halim has happily explored modern calligraphy and now shares her passion with others through workshops and her recently published book “Calligraphy Styling”. 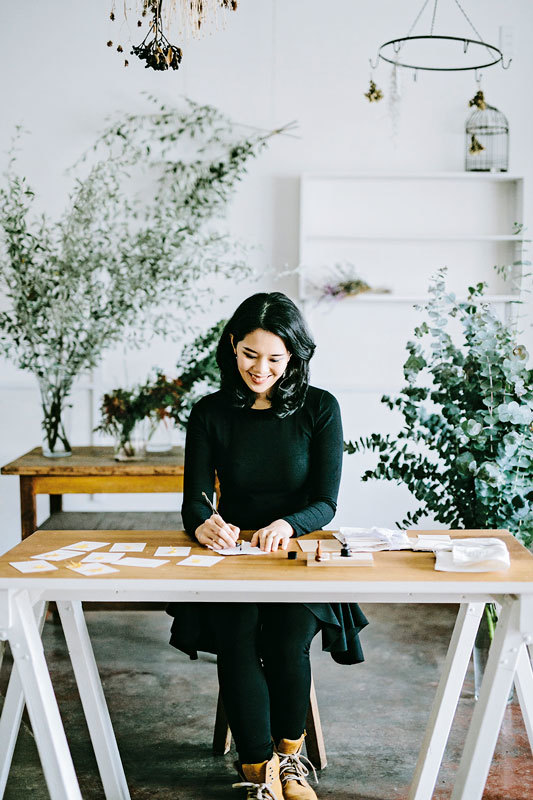 With a background in graphic design, Veronica is the Creative Director of a design studio, catering to corporate and lifestyle clients, including prestigious brands such as Chanel, BMW, Gucci, Penhaligon and TWG.

However, working on corporate projects can be quite tiring. To take her mind off work, she began to practice modern calligraphy - and quickly immersed herself in this unique art form.

“When I was in university, I tried calligraphy in my typography class,” Veronica recalls. “It was an introduction to calligraphy and a rather short session, but I quite enjoyed it. If you pick up calligraphy, you need to practice it constantly and once you stop, you lose it. So when I started again, it was actually just a hobby.”

It was Edward Johnston, often dubbed the father of modern calligraphy, who revived the art form in the early 20th century. Born in Scotland in 1872, Johnston enrolled at Edinburgh University to study medicine, but it was calligraphy that piqued his interest. Changing his career path, Johnston was appointed to teach Lettering and Illumination at the Central School of Arts and Crafts in London in 1898 and published the book “Writing & Illuminating, & Lettering” eight years later. His book, widely regarded as the most comprehensive manual on modern calligraphy, has never run out of print. Johnston also designed the famous sans serif alphabet that is used on the London Underground system. 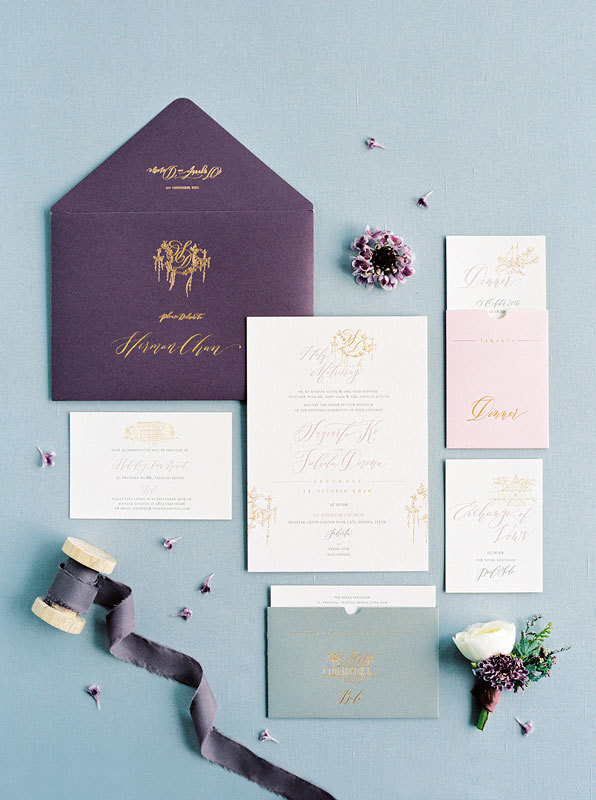 “Everything is about being digital these days, especially in design, and I also noticed that my handwriting is getting uglier and uglier because we usually just type on a computer,” Veronica explains. “That’s also one of the reasons why I picked up calligraphy, to practice writings, strokes, alphabets and improve my handwriting again.”

Seeing the evolving quality of Veronica’s expressive penmanship, influenced by the shapes and patterns found in nature, her friends became curious and asked her to teach them about calligraphy. With no background in teaching, Veronica decided to get a small group together and show them the ropes of basic modern calligraphy.

“I just did it for fun, but after that, my friends’ friends began to contact me and wanted to learn more as well - and that’s how I started to organize regular workshops,” Veronica says.

Still working full time at her company, Veronica’s schedule has become quite packed, and she usually conducts workshops once a month on the weekend. Despite being extremely busy, she never sees it as a burden. On the contrary, calligraphy helps her to find some peace of mind.

“You have to concentrate on each and every stroke,” she says. “For me, it’s like meditation.” 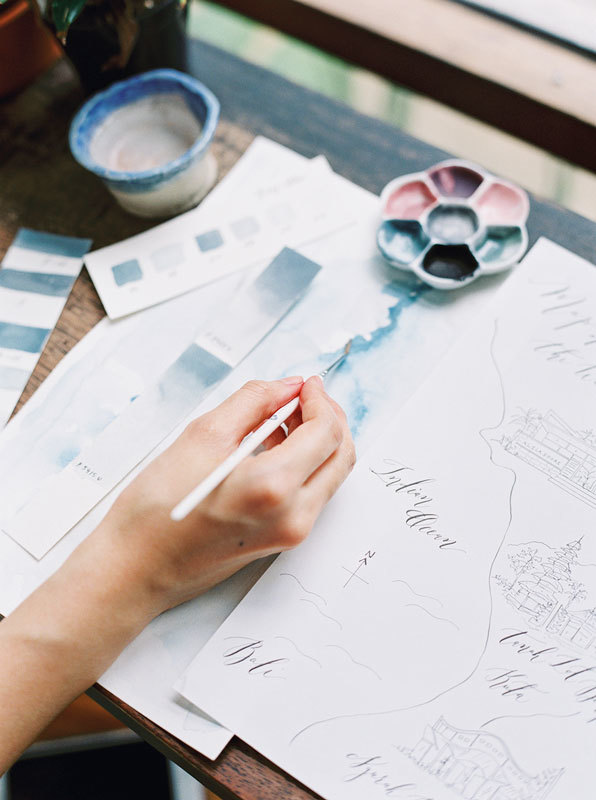 The students in her workshops, however - a mixture of professionals, housewives and students - beg to differ.

“They often complain that it’s quite hard,” Veronica adds with a laugh. “But after a while, after you bond with your pen, you can regard it as something fun to do. It’s important to not put so much pressure on yourself. I guess there is a lot of distraction in my daily life, like dealing with clients and so on, so when I first started, I put aside one hour each night and do calligraphy, just scribbling and enjoying it.”

Veronica also runs an online store selling Japanese goods, which has led her to travel to Japan frequently to meet suppliers. One of the shop owners she met during her business trips was intrigued when Veronica told her she practiced calligraphy as a hobby.

“She said that in Japan, people who are interested in calligraphy usually have to learn from the gothic style first before they can move on to modern calligraphy, so it’s quite academic and very serious, you have to be committed and enroll in designated schools,” Veronica explains. “We then decided to try a more casual approach. The shop owner suggested to organize a workshop in Japan, and she offered me the space on the second floor of her store which she normally uses as a gallery and for pop up collaborations.”

Veronica’s first workshop two years ago raised a lot of interest, and more have followed since. In fact, they have become so popular that Veronica published the book “Calligraphy Styling” in Japan. 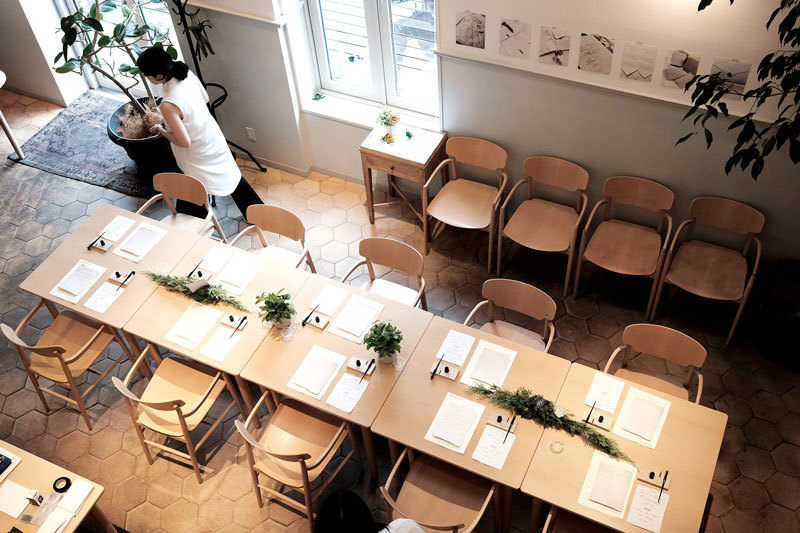 “One of the ladies who helped me with the workshop is an editor, and she was very interested in publishing a book about calligraphy. I was reluctant at first, because writing a book sounds very serious, and you have to be a true master with top-notch skills. I told her that I’m not qualified for that,” Veronica recalls. “But she said that according to her own observations in Japan, people really love my style, and how I apply calligraphy on other items, for instance when I use calligraphy on wrappings, or table settings.”

The book therefore puts a focus on styling and Veronica’s way of combining calligraphy with different objects. After working on it for a couple of months, the book was published in Japan in March by Shufunutomo. It introduces the many ways to apply calligraphy in daily life situations, starting with the basics on how to use pointed pen, materials needed as well as the strokes sequences to construct copperplate and modern calligraphy scripts, to applying these skills to create items such as packaging labels, placecards, menus, greeting cards, invitations and many more. If it is going well, there may be a chance to translate it into English and Indonesian in the future.

“It’s quite a blessing to have this kind of opportunity and it was such a great experience to work on this book,” Veronica says.

Despite her success, Veronica remains humble and feels like she still has a lot to learn.

“I will probably need another 50 years to master modern calligraphy,” she laughs. “Calligraphy brings me great joy, not only when I teach, but also as an artist. I sometimes collaborate with other artists, using my calligraphy in combination with fabrics or paper motifs. I still have a long way to go and much to discover, but I enjoy every aspect of it.” 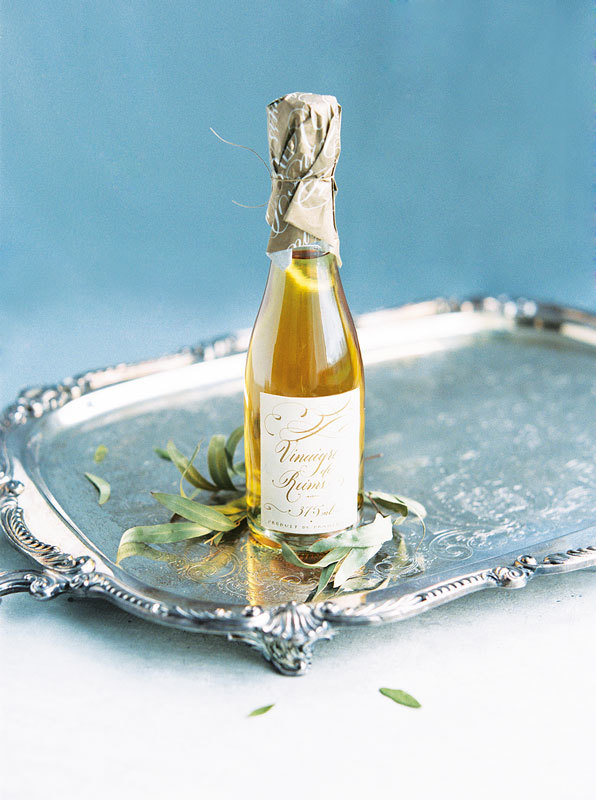