Many professional comic creators started small with their own comic book, and so did Kamahele, a young talented Jakarta-based artist who had just launched his first comic strip in November.

Taking place at Aksara Bookstore, South Jakarta, Kamahele (Kama) unveiled his first comic strip book debut last month attracting a potential audience of students and enthusiasts of literature and arts and culture. Kama & Hallie is the first comic strip book offering examples of the original artwork of Kama’s perspectives on the real world, showing criticism in a way that is clever and funny.

Kama started developing a passion for comic books and animation ever since he was five years old. Growing up with the greatest comic serial strips like Calvin and Hobbes and Garfield has driven him to explore and create a genuinely hilarious strip with easily marketable characters. Created for all ages with family-friendly content, Calvin and Hobbes are famously known for its spiritual reflection on friendship, values, family, death, joy, God and imagination. 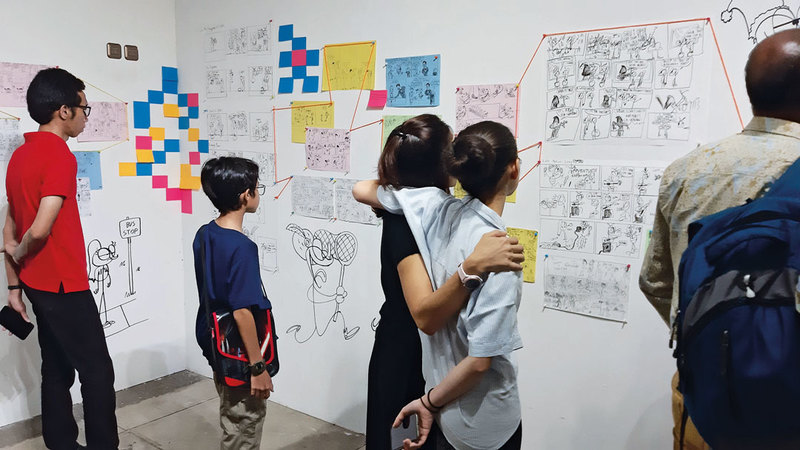 Usually short, funny and entertaining, Kama & Hallie provides humorous antics of the five main characters named “The FNAF Kids”: Kama, a very critical kid who likes to do puns and takes things scientifically correct; Hallie, the dumbest character of the series and Kama’s best friend; Marky, a 15-year-old boy and is interested in everything; Annie, a girl who loves science and acts like a scientist; and Joey, Kama’s and Hallie’s best friend who likes to give advice and really likes Annie and Marky.

Set with a light design, the strip depicts Kama’s reflection on relationships with his best friend Hallie. Kama & Hallie are two distinct characters but at the same time represent the author’s nature. It also examines Kama’s relationships with his friends and classmates while portraying in different column layouts, art styles and stories of showing things explicitly.

In the future, Kama expresses his enthusiasm about some greater projections on the upcoming series of the strip, “There needs to be a character development, designs and storylines of the series. I am currently working on some bigger projects in relation to the storylines and genres like horror and adventure. In the meantime, I’m highly interested in animated feature film, so I might want to come up with something unique and fresh about the upcoming series of such thing.”