Through its goods on display, such as colourful souvenirs, traditional food and drinks, clothes as well as furniture, Betawi Store, which is located inside a traditional Betawi house, showcases the cultural richness of Betawi people (the term Betawi is derived from Batavia, the official name given to Jakarta by the Dutch during the colonial era). 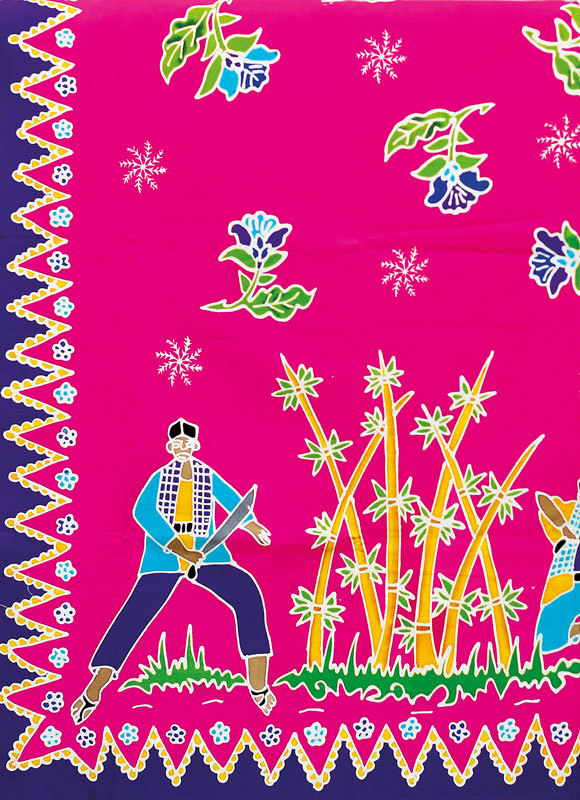 Opened on March 23rd 2017, Betawi Store is located in the area of Lenggang Jakarta, a food court and souvenir centre that offers merchandise from various regions in Indonesia inside National Monument (Monas) Square in the city center. The opening of other stores in various spots across Jakarta is in the pipeline – each Betawi Store will be built like a traditional Betawi house, too.

Since its inception, Betawi Store has been on a mission to preserve as well as to promote the culture of Betawi people, known as the native Jakartans. Thus it sells all things Betawi, including clothes, furniture, food, drinks and souvenirs in all shapes and sizes.

Betawi Store is a collaborative project between the Jakarta administration and Badan Musyawarah Betawi (Betawi Culture Consultative Body). By opening Betawi Store, they hope they provide a boost to the city’s creative economy - the merchandise is made by small and medium-sized enterprises. 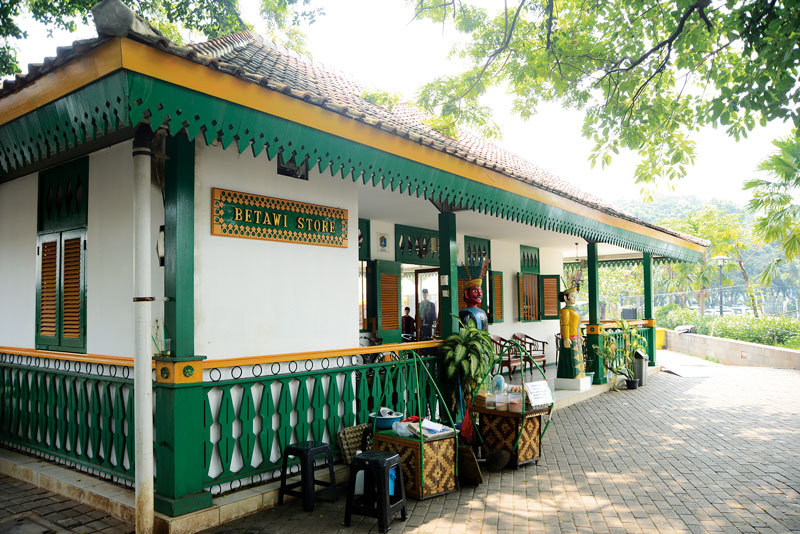 Betawi Store resembles a traditional Betawi house in appearance. On the outside, it is painted in green and yellow, the popular colours for Betawi houses, while a couple of deer antlers as well as gigi balang lisplang or wooden mouldings that resemble grasshopper’s teeth, adorn this house. Moreover, the house is also decorated with Betawi-style furniture – some of the furniture, such as the wooden cupboards, are genuine antiques, while others are replicas (the reproductions have price tags on them).

Growing up in a family of the descendants of Prince Jayakarta, a famous Betawi hero, who treasures their Betawi culture, Ade, an architect by profession help the clients to bring Betawi style to their homes, hotels, restaurants and offices. Moreover, Ade and his team also help the clients to organize Betawi cultural events, say at malls, hotels or offices. 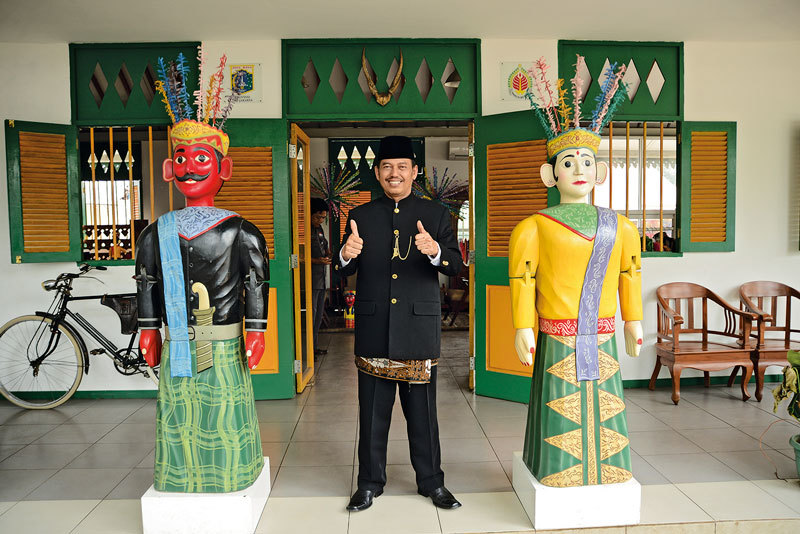 Looking for souvenirs for your friends or a memento of your visit to Jakarta? Check out the cute ondel-ondel collection on offer. Ondel-ondel is one of the icons of Jakarta – a person inside it moves this Betawi iconic giant effigy. Here, you can find ondel-ondel, both the male and female versions, in various forms, including key rings (from Rp 10,000 to Rp 15,000 each), pencils and statuettes.

The clothes and textiles section is definitely worth a look. Many people, including Indonesians, have neither heard nor seen Betawi batik that is less popular than Javanese batik (batik fabrics from Tasikmalaya, Cirebon, Solo and other regions in Java, apart from Jakarta). Betawi Batik has its own motifs that make it distinctively different with other batik fabrics, such as tanjidor - Betawi orchestration that is influenced by European culture, using various instruments including drums, trumpets and clarinets - ondel-ondel and tumpal (crocodile’s teeth). 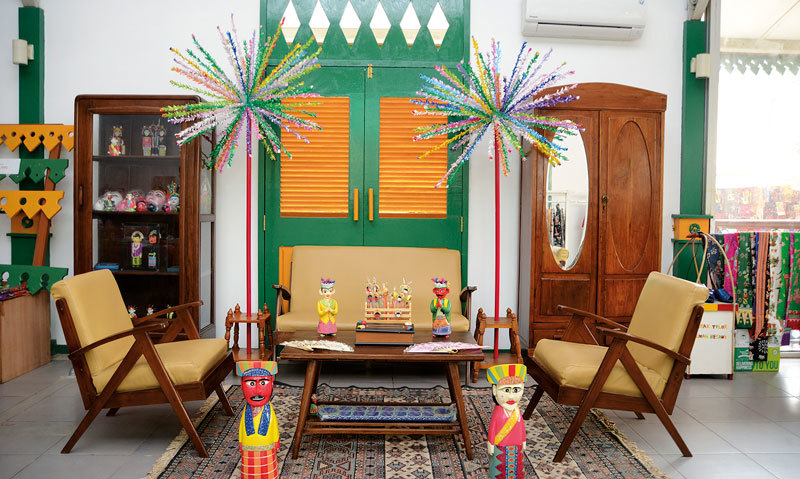 Beautiful batik goods from Rumah Betawi make up most of the clothes and fabrics displayed. This brand offers two kinds of hand-made batik textiles, namely batik cap (hand-blocked batik made by using a copper stand) and the time-consuming batik tulis (hand-drawn batik made by using canting, a copper vessel with a spouted nib).

The example of acculturation between Chinese and Betawi cultures is also apparent in the traditional Betawi male outfit called baju sadariah, which is popularly known as baju koko. The long-sleeved collarless white shirt resembles the type of shirt that was usually worn by Chinese men who lived in Jakarta in the bygone era. Many believe the name ‘koko’ is derived from engkoh, which means Chinese male (however, ‘koko’ means older brother in Chinese). 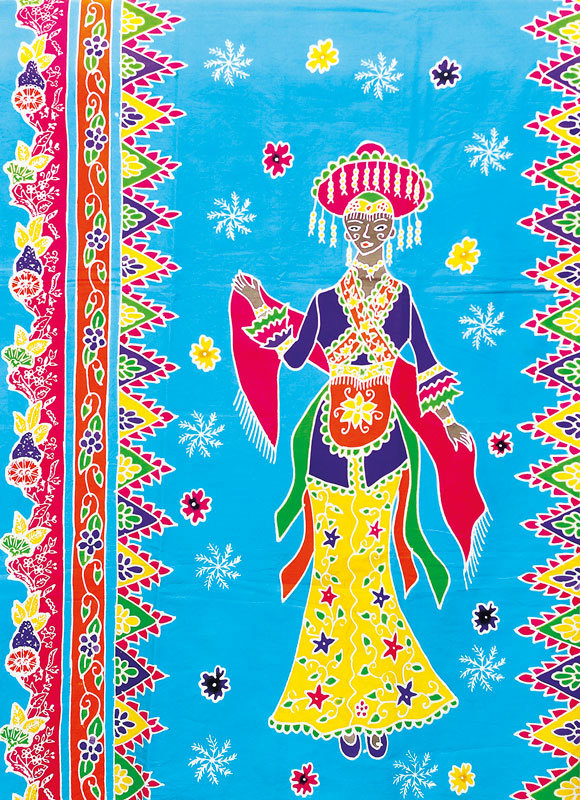 One can buy and match his baju koko with Betawi batik pants and vintage-looking Lily plastic sandals. Lily is actually the brand of those footwear. The lightweight, strong yet flexible, bendable plastic sandals cost
Rp 90,000 per pair.

When it comes to food and drinks, this place offers both traditional fare as well as traditional with a twist – for instance, both the original bir pletok and the modern bir pletok with milk are available. Even though bir means beer in English, bir pletok is actually a non-alcoholic drink made of water, gingers, cloves, and cinnamon among other ingredients. I highly recommend the original Mpok Kinung Bir Pletok (Rp 10,000 per bottle) as I love the cinnamon scent of this tasty drink.

Before you go home, do not forget to buy the delicious kerak telor, which roughly translates as ‘egg crust’. The seller will cook the omelette-like dish right before your eyes at the terrace of Betawi Store. Kerak telor is glutinous rice cooked with eggs, dried shrimps, as well as chillies (optional), served with fried shallots and serundeng (fried shredded coconut) as topping. Kerak telor, which uses duck eggs, costs Rp 25,000, while the chicken eggs version is Rp 20,000.

All in all, Betawi Store is the place to go when one wants to buy goods that are uniquely Jakarta. It is indeed very hard to leave Betawi Store empty-handed!

Note: You can take Transjakarta Bus, and drop off at Monas Station – the National Monument is located across from that station.