Portraits of a Sinking City

On February this year, Cynthia Boll won the prestigious Zilveren Camera 2018 (Silver Camere Award) for her photo series Sinking Cities, Jakarta, in the category Documentary International. In addition, the series won the Public Award received in the presence of His Royal Highness King Willem Alexander. The Zilveren Camera is the Dutch prize for photojournalism and documentary photography and has been awarded since 1949.

The photo series is a direct result of Boll’s photo project, The People Behind The Seawall, that DutchCulture helped produce, to record the sinking cities. The global project Sinking Cities is an integrated media, community awareness and science exploration project. Boll thrives on multi-disciplinary, creative exploration and making the world a better place through the art of storytelling. Creating a unique compelling visual story, combining documentary photography with new technologies and communication, her stories are shown from the perspective of ordinary people. 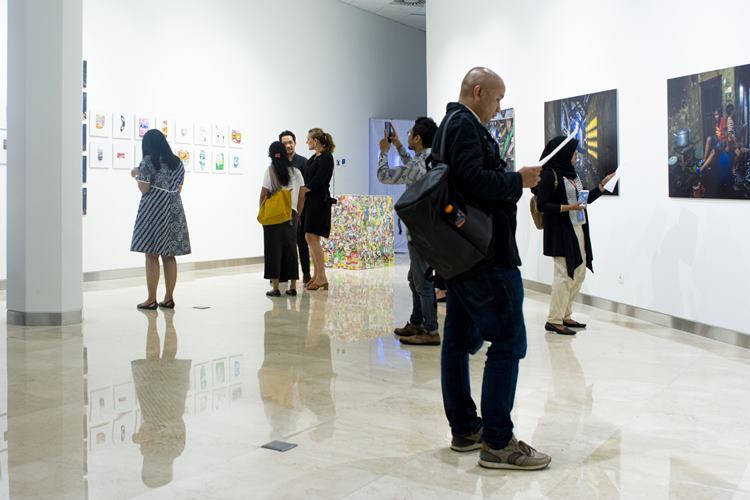 The Sinking Cities, Jakarta was exhibited at the Erasmus Huis, from 21 November to 20 December which presented 12 photos and multimedia. Previously, those works were also exhibited on 5 December 2016 at the Van Vleuten & Cox Building in West Jakarta.

Boll became interested in Jakarta after watching the news on television about the city being threatened by rising water levels at the fastest in 20 years. Said news were part of a reportage about the cooperation between the Netherlands government and Indonesia.

“I hope through these pictures people are aware of what’s going," - Cynthia Boll

Boll lives in Beinsdorp, a small town in Noord Holland surrounded by the dyke, which is already a few metres below sea level, her backyard is in danger of sinking because the ground continues to erode. She feels a connection between Jakarta’s situation and her house, even while she feels safe because her country already applied good water management.

She is imploring the city to alert the public to the growing risk of flooding due to land subsidence thanks to excessive ground water extraction as well as the fragile state of the 40-year-old seawall built to protect the capital against rising sea levels. 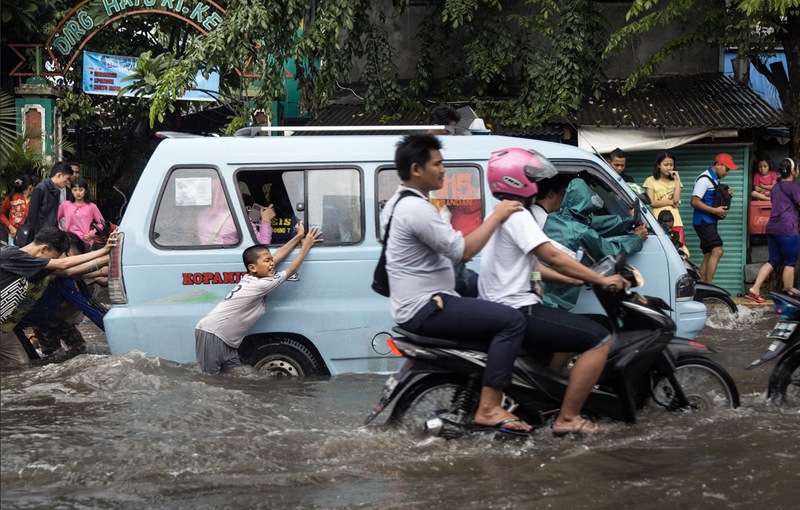 The potential for Jakarta to be submerged is indeed not a laughing matter. The city’s land surface sinks from 10 to 25 centimetres per year, making the city one of the fastest sinking cities in the world. If precautions are not taken, one-third of Jakarta will be flooded in approximately 25 years’ time. The situation in Jakarta is not unique: parts of Venice, Dhaka, New Orleans, Bangkok, The Netherlands and numerous other cities will sink below sea level in the foreseeable future.

According to Deltares, an independent institute for research in the field of water and subsurface, land subsidence will surpass sea level rise by a factor of 10 in many coastal and delta cities. This is many times higher than the expected rise in sea level due to climate change. It is one of the most underrated threats to our future: a “secret killer”.

Given this grave but also fixable issue, it’s hard to believe public awareness of sinking land is not a top priority on political and corporate agendas. Boll plans to change that with her global project, Sinking Cities, in addition to collaborating with impacted communities. She is also working with scientists and other creative institutions.

Between 2014 and 2018 Boll documented the consequences of land subsidence from the perspective of the residents of Jakarta. She has followed four residents of North Jakarta to capture their daily struggle with the floods, namely Alda from Pasar Ikan, fisherman Lukman from the Pojok Kampung near the seawall, jamu (herbal medicine) seller Sarmini from Muara Baru near Pluit and Sumari, a bicycle tour guide from West Jakarta.

Boll chose those four people to represent different profession and age—Alda is the future, Sumari represented heritage, Lukam because he depended on the water for a living and had to elevate his house’s floor every year due to the flood and Sarmini because the floods directly affects her economic condition. 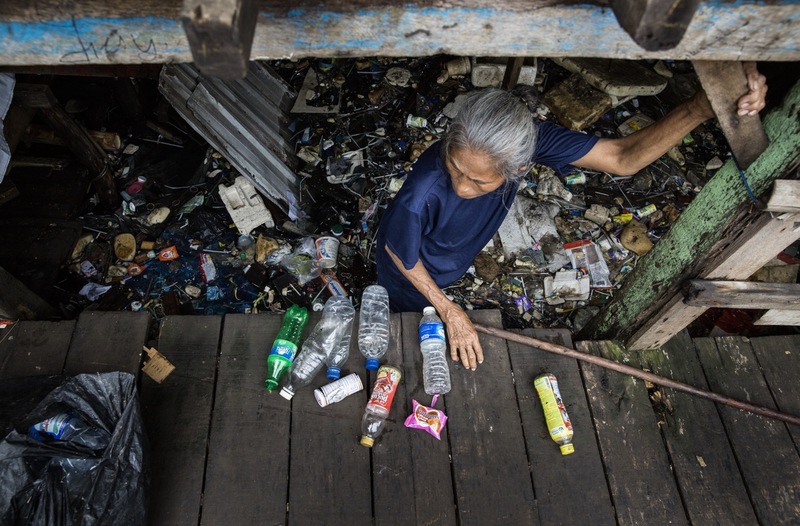 From Sinking Cities, Jakarta exhibition, visitors can see how Boll captured the condition of these four people. The photo titled Ibu Sarmini illustrates her sitting down on a chair with her feet submerged in water, waiting for her husband to help her with the last household items. When there is a risk of flooding in the low-lying neighbourhood of Muara Baru, residents move their belongings to a higher floor. Also, in Girl Sleeping, we can see a child sleeping in her bedroom within a house built on stilts above the sea.

Boll also documented the Muara Baru Seawall, an area immediately adjacent to the seawall that has fallen by one meter in the last four year. The residents are not or hardly aware of the imminent situation.

“I hope through these pictures people are aware of what’s going on and maybe it’s a good thing if they can join forces and push for a change. Maybe the government will notice and do something about the situation. The Netherland has implemented actions, such as improving water management. Jakarta is developing but it has to go faster,” Boll said.