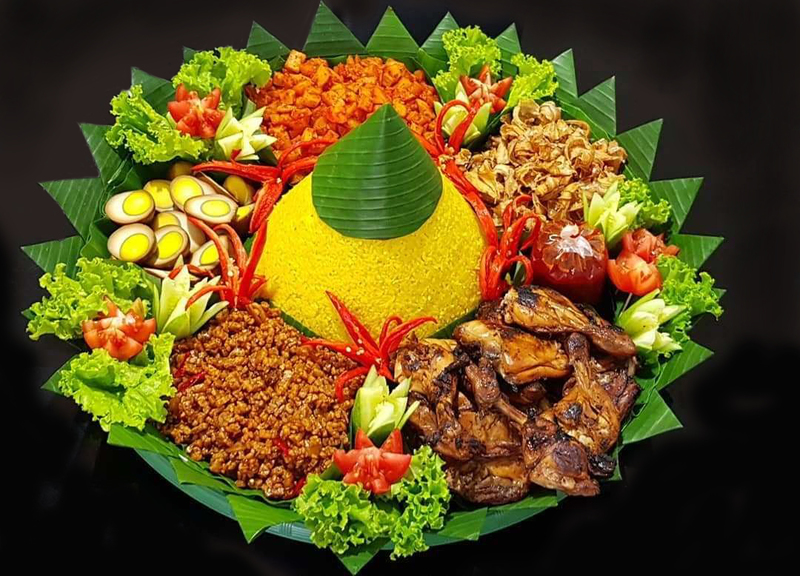 Tumpeng has become a symbol of celebration. This iconic cone-shaped rice with various assorted dishes surrounding it is a splendour on the buffet table where people will joyfully enjoy it together with their community. As August is the month of Indonesian Independence celebrations, and tumpeng will always be included as its special menu, let’s find out its meaning.

Indonesian people, especially in Java and Bali, use tumpeng as a symbol of gratitude. According to Islamic tradition in Java, “tumpeng” is an acronym for the Javanese language yen metu kudu sing mempeng (if you go out, you have to be really enthusiastic) which if traced has the meaning to be careful in living life when we humans are born into the world. Life must be lived with confidence, enthusiasm, focus and not easily discouraged, always believing that God is always there in every step.

Judging from its history, tumpeng was first made to glorify the mountain as the abode of the ancestors. This philosophy is also closely related to the geography of Indonesia which is filled with volcanic ranges. This tradition was often carried out by Hindus in the archipelago. The concept of tumpeng derived from the old Javanese manuscript Tantu Pangelaran, which regarded the peak of Mount Semeru in East Java, known as Mahameru, as the place of gods. Hence, tumpeng represents the shape of a mountain.

In addition to symbolizing the geography of Indonesia, the cone or mountain shape of tumpeng also symbolizes the relationship between humans and God: there is only a single grain of rice on the top of the tumpeng, which represents God.

With the entry of Islamic teachings into Indonesia, the tumpeng tradition was still carried out but its philosophy was adapted to Islamic teachings. According to Islamic tradition in Java, tumpeng is considered an ancestral message regarding a request to the Almighty. In the tradition of kenduri or selametan (communal feast) by the Islamic community in Java, before the tumpeng is served, recitation and reading of the holy verses of the Koran should be held first.

We commonly know that tumpeng is made of yellow rice and white rice, but nowadays there are other variations, such as blue rice tumpeng made from butterfly pea, lime leaves-rice tumpeng, noodle tumpeng or even a pudding tumpeng. But whatever it is, traditionally it is served with seven assorted dishes containing different elements of foods, such as vegetables, sea and land animals that offer various flavours, including sweet, sour, spicy, and bitter which illustrate the different situations of life.

What most people do to celebrate is they cut the tumpeng from the top with the current popular ritual of giving the topmost slice to the honoured guest at the event. But actually, this could be a big mistake since the tumpeng represents the relationship between humans and God, slicing the top off the tumpeng means cutting the relationship with the Almighty. We should start eating tumpeng from the bottom together with all the guests surrounding the dish and leave the last portion as a symbol of praise.

New Trends Have Emerged During Pandemic in Indonesia