Bringing Back the Culture of the Traditional School

In my travels around the Indonesian archipelago, I have experienced and encountered a variety of traditional cultures. In many communities, I have witnessed a disconnection between the older generation and the younger one. While traditional culture is still alive in some villages, there are others where traditions have completely disappeared. Will those with a connection to tradition survive into the future?

Over the past six years I have travelled to many indigenous communities across the Indonesian archipelago. I have been to traditional death ceremonies and many cultural festivals. I have spent time in remote villages and in modern settlements closer to cities and have slept many nights in homestays, including traditional longhouses.

In many communities I have witnessed a disconnect between the older generations, with their knowledge and wisdom about ancient ways, and the younger generation intent on playing modern games on their tablets and phones, often distracted and rarely sitting and listening to their mothers’ and grandparents’ stories.

In some villages traditional culture is still very much alive, with young people enjoying traditional music and dance. However, in others where there are no teachers, these traditions seem to have disappeared.

I first met this 26 year-old woman from the Dayak Kanayatn tribe (one of 170 Dayak tribes in West Kalimantan) late last year and was immediately impressed with her determination, intelligence and leadership skills. This was a woman with a mission.

Wisa, as she is known by her friends, spent a year in Jakarta working for the youth arm of AMAN (Indigenous Peoples’ Alliance of the Archipelago), which represents 17 million indigenous people across Indonesia.

During this time she learnt a lot about customary land rights and other challenges facing Indigenous people. She also learnt more about the important role of indigenous women in cultural preservation.

When she returned to her village in Landak Regency, West Kalimantan in 2015, Wisa saw the many issues faced by indigenous people there, and many things worth fighting for. She was determined to build a movement for positive change to address  land degradation, loss of cultural identity and polluted water resources due to palm oil plantations and mining. As part of this, she became committed to doing something to preserve Dayak culture among the young people in her village and beyond. 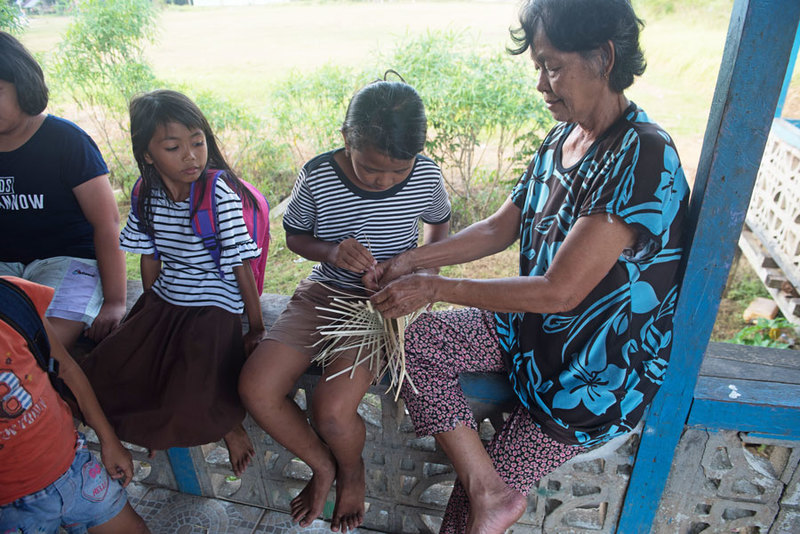 “In February, 2016, together with four friends, I formed the Samabue Traditional School, named after a sacred hill near my village”, Wisa recounted when I visited her village earlier this year. “We could see that our culture was fading away. Many children in the village refused to speak their mother tongue in everyday life. They were somehow afraid that it was not the “cool” thing to do.

Parents rarely taught the children to speak their local language, preferring that they speak Bahasa Indonesia to fit in with the others. Traditional games that I played when I grew up were no longer being played, many  rituals had died away, and traditional stories were not being told anymore. Many people no longer had a strong connection with nature”.

“For all these reasons, I saw it was necessary to reconnect the children with the elders in the village. The wise ones were very excited to join the programme and pass on their knowledge and skills to the kids. They thought that the wisdom that was part of their ancestral heritage was no longer valued in today’s modern world.”

While in the village, I had the opportunity to observe the school in action on the large veranda of Wisa’s family home. Classes are held once a week for two to three hours, after the students finish their government school lessons. There were around 25 children from 2 to 12 years of age, and a few teenagers who assist. The class I joined began with a song written by Ayank, a high school student and one of the assistants.

There were eight others lending a hand the day I was there, mostly mothers wanting to play their part. I met Negonjo, an expert weaver who took great delight in teaching an enthusiastic group of kids ancient weaving techniques that had been dying out in the village.

Damianus, a 72-year-old man, sat reading poetry and stories he had handwritten in a huge book, while the children listened intently. After he had finished reading, Damianus proudly confided to me,“ I thought before Wisa started this programme that no one was interested in the stories that my grandfather had passed on to me”.

Wisa went on to explain, “ I think as Dayak people we must never lose our identity. We are Indonesians, and we may be Christian or Muslim, but more important than anything else, we are Dayak Kanayatn people. This is the essence of who we are, so we must be proud of that and feel free to speak our local language Our big dream here is for customary schools like this one to thrive and be established throughout West Kalimantan and wider Indonesia so that indigenous culture is preserved and enhanced for future generations”.

There are now 25 customary school programmes in Indonesia, with plans in place for more. AMAN recently held a national meeting on customary schools in Jakarta. The organisation continues to encourage youth leaders to become more involved, and will be offering related training and skills-building programmes in the future.

David Metcalf together with Ranu Welum Foundation, who represent indigenous youth  will host the Indigenous Celebration event at Arma Museum in Ubud, Bali from 11 to 13 May, 2018. The Indigenous Celebration will bring together 32 tribes from Indonesia, Australia, New Zealand and 5 other countries to share their wisdom, dance, play traditional music, sing, tell stories and read poetry. There will be a number of workshops conducted including traditional tattooing, creative writing, sound healing, and dance and music classes.

This event will be followed by a two-day programme at the Green School that will focus on ensuring young people from schools in Bali benefit from the wisdom of visiting elders. This is a private event but open to anyone involved in education and to schools in Indonesia.

David is leading a cultural tour to West Kalimantan after the Indigenous Celebration, to attend the Gawai Dayak cultural event and then into a traditional Dayak village.