Walking towards a long line of tall traditional pinisi boats in the historic Paotere Harbour in Makassar, I caught whiffs of freshly cut timber.

I watched strong, sinewy sailors navigating gangplanks with great agility, balancing neat stacks of wood on their shoulders. Dusty cement bags were being unloaded from these pinisis with impressive speed. Men streamed out of one boat further down the line, hunched over bearing the weight of lumpy sacks of onions. I heard the bellows of cattle as they were being unloaded onto the wharf in the distance and piglet squeals coming from non-descript sacks nearby. On the wharf, ropes and sacks were strewn everywhere and people seemed to be moving in all directions. This is a working port and only the hardiest of adventure travellers would venture here. Still, for me, the harbour is a place where the colour and culture of the strong Bugis and Makassar men of the sea is on full display, and it was worth that alone to make the trip.

I arrived at Paotere Harbour by becak (a pedal powered bicycle rickshaw). From my slightly raised position in the open becak, I could readily survey and experience the chaos, noise and sights. As my driver and I wound our way through stalls stacked with piles of colourful chilli and exotic produce, he clipped a few dried fish stands on the way, which was all part of the experience. I felt caught up in the hubbub of hustle and haggling, and a tide of trade, which have spanned the ages dating back to the 14th century. 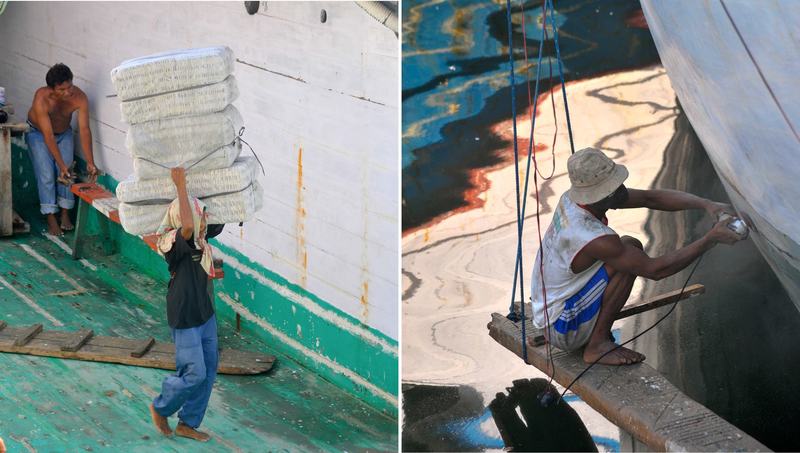 There is a modern port in Makassar, but the harbour of Paotere is where the Portuguese and Dutch sailing ships moored centuries ago. To this day, the cargo is mostly hand-carried. The traditional wooden pinisi range from 20 to 40 metres long. These vessels spend long and tireless hours at sea, plying their way between the vast Indonesian archipelago, calling in on some very remote islands. They are a dramatic sight at any time. When in port, with their colourful solid wooden towering high bows in line like soldiers, they are an impressive sight. The colours range from vivid and fresh to weathered tones in every colour of the rainbow.

Having left my becak behind, I took a stroll along the wharf, pausing to inspect a series of large sails in various states of repair which hung next to domestic laundry. From the deck of one of these towering giants of the sea, a confident, smiling young man called out to me from the railing. He gestured for me to come on board and I gladly accepted.

Once I was on board, he shook my hand warmly, introducing himself in broken English. We ducked under a clothesline, and he showed me to the steering room. There was no GPS in sight. “We don’t use a compass”, my new friend, Daeng explained. “We are born of the sea, and carry an inherent knowledge in our bloodline. I can read the stars and navigate the waters this way. I can smell shallow water.”

I sat down and shared a coffee from a rusty old stovetop that looked like a museum piece and slowly but surely met the other crew members, who were extremely friendly. They were happy to take some time off to also share some stories with me. As the only foreign tourist seen at the port all morning, I was clearly a bit of a novelty.“Make sure you eat at one of those warungs over there”, Daeng said,  pointing to a line of rickety shacks. “These simple restaurants serve some of the best seafood you will ever have. Of course, they have been doing this for hundreds of years, so you can rest assure, they have the recipes down to a fine art. Even the President of Indonesia visits this old port from time to time and is known to eat in that one over there,” he said pointing out one of the more modern looking ones with a proud smile. “They are all excellent, and they all charge local prices,” he added. 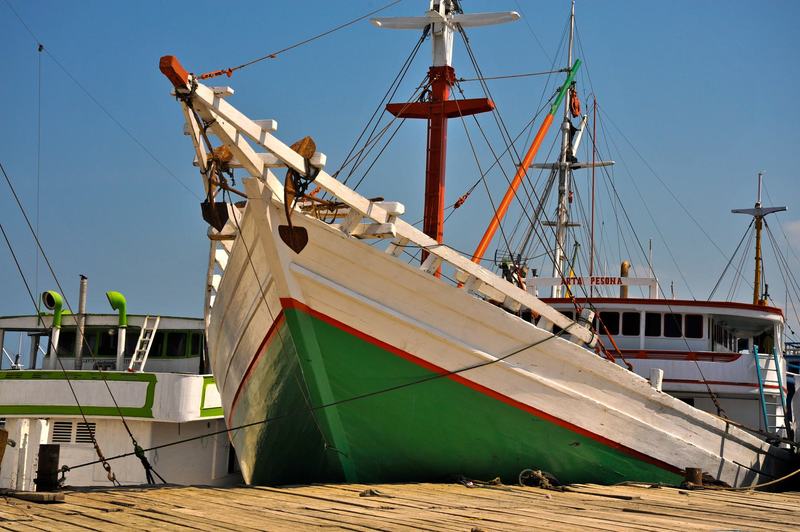 After my coffee and friendly exchange, I bid the crew farewell. I took the short walk from the harbour to try one of the warungs. I quizzed the waiter with my usual line, “What is the most popular dish?” and was delighted when my soup bowl appeared with firm white pieces of fish swimming in a bright yellow clear liquid. I devoured the Pallu Mara, a yellow tamarind fish soup, which my waiter told me had been rubbed in salt and turmeric and prepared in tamarind water and slow cooked for two hours. It was delicious.From the warung, I looked back at the wharf and rows of island traders.  Still built by hand without a nail, they looked ready to survive even the most violent of tropical storms. I felt really privileged to have been able to spend the morning walking amongst these sailing beauties.

Historically, the sea cucumber (trepang) was a highly prized and prolific part of the marine trade passing through this old port. They are still traded today, however in much smaller numbers. The 16 different species were traditionally caught by hand with a spear or by laborious dredging. Trepang live on the seafloor and are exposed at low tide. They are preserved by being placed in boiling water before being dried and smoked. The trepang then make their way to Makassar from the outer islands, many still traded with the sea gypsies who live in semi-permanent coastal villages scattered throughout the islands.  From Makassar, the trepang are then shipped out to Southeast Asian markets. They are valued by the Chinese for their jelly-like texture, their flavour-enhancing properties and as a stimulant and aphrodisiac. When the trepang industry was at its height, the Makassarese sea vessels sailed thousands of kilometres along Australia’s northern coastline. 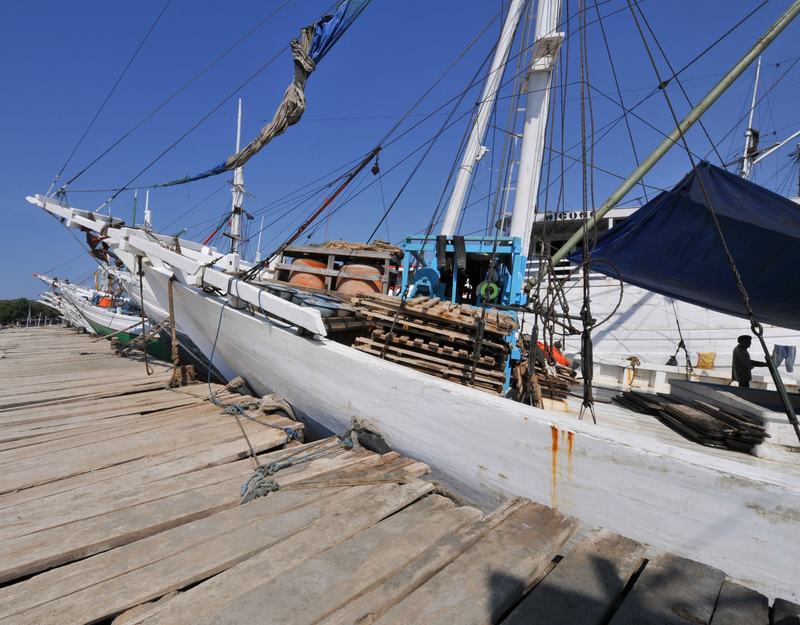 From the 1500s, the Makassarese fishing fleets visited the northern coast of Australia and traded with the Aboriginal people there. Aboriginal rock art by the Yolngu people from Arnhem Land depict perahu (boat) designs on cave walls, and radiocarbon dating provides evidence of Makassar contact from this period.

Explorer Mathew Flinders, in his circumnavigation of Australia in 1803, came upon a Makassarese trepang fleet near present-day Nhulunbuy. He had a lengthy exchange with Captain Pobasso, a Makassarese, through his cook, who communicated with the captain in Malay. In this way, he learned of the extent of the trade. The historian, Regina Ganter writes: “1,000 Macassans ....must have seen a veritable invasion against the 7,000 British nestled into Sydney Cove and Newcastle”. She further says, “The British settlements of Fort Dundas and Fort Wellington were established as a result of Phillip Parker King’s contact with Makassan trepangs in 1821 and Nicholas Baudin encountered 26 perahu off the northern coast of Western Australia in the same year.” Trade from Arnhem Land to the far reaches of the Indonesian archipelago came to an end in the early twentieth century. Trepang licensing fees, customs laws and taxes were imposed under a white Australian law and led to a decline in trade. By 1907 the last of the Makassar perahu had left Arnhem Land. 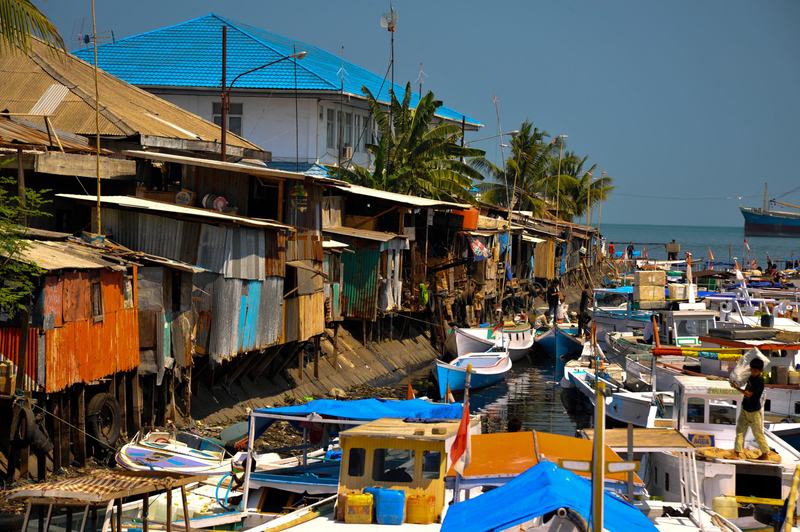 It was fascinating to spend time with local people at the old harbour and soak in the layers of history, humanity and heritage to be experienced there. I felt honoured to befriend a crew of pinisi sailors, whose marine knowledge and bloodline were so deeply connected to South Sulawesi’s living maritime history.

Today’s pinisi at Paotere Harbour are technically not sailing boats. They have one small mast and a tiny sail that they rarely or never use. The reason they keep that little bit of mast and sail is because it’s cheaper to register than a ship that has an engine and no sail at all.

The boats found at Paotere Harbour are more ‘island traders’ or ‘island tramp traders’. A ‘tramp trader’ is a ship that goes around from place to place looking for any cargo to carry, rather than working on a regular scheduled route.