“Naik Dango is a very special time for us, a time to celebrate our unique culture and pay tribute to the ancestors. We have been holding this event for 30 years and share it between three regencies - Landak, Kuburaya and Mempawah.” These were the words of Karolin Margret Natasa, Landak’s Regent, and daughter of the previous Governor for West Kalimantan. I was interviewing her in her home in between events at the four-day Naik Dango celebration.

She continued, “We have hundreds of dancers, singers and performers from many different Dayak tribes gather to celebrate Naik Dango. The main tribe here is the Kanayatn, but there are many sub-tribes that also come. These sub-tribes all speak their own languages. They look forward to this event each year, especially the children, who have a chance to take part in various competition”.

“I think this is a very interesting event for people outside the area to witness, but we get very few tourists as we have limited facilities. We only have three hotels. However, our biggest attraction is the friendliness and warmth of the people who love to welcome visitors and foreign guests, don’t you agree?” 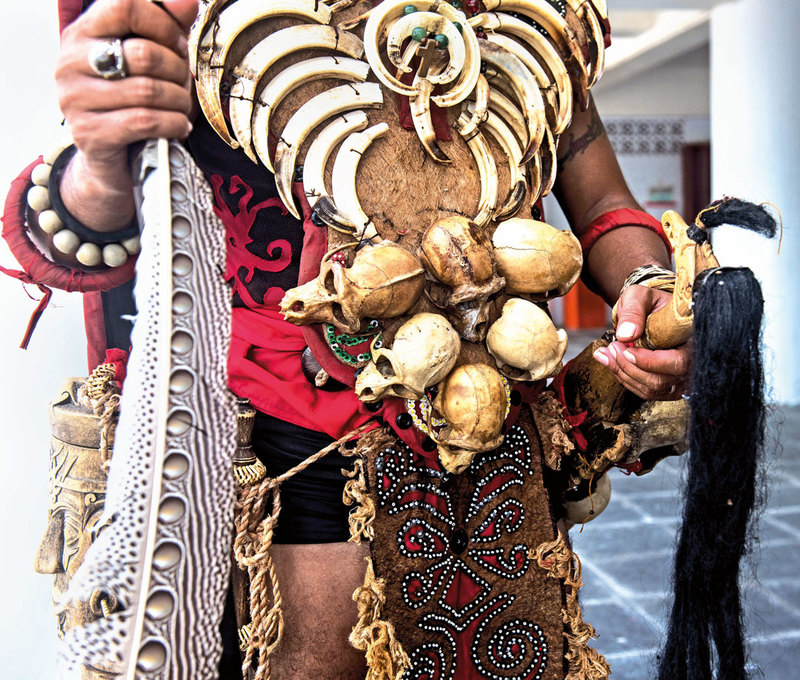 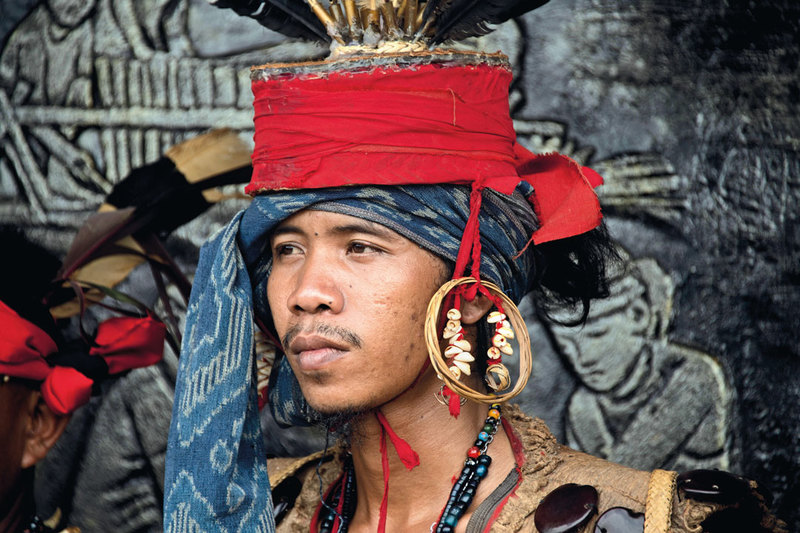 I definitely agreed. I was travelling with a group of five people, and we were greeted with great enthusiasm everywhere we went. The opening parade was a spectacle of dozens of colourful floats accompanied by thousands of Dayaks from the different sub-tribes dressed in a variety of colourful outfits, adorned with feathers, monkey skulls and various other impressive accessories. 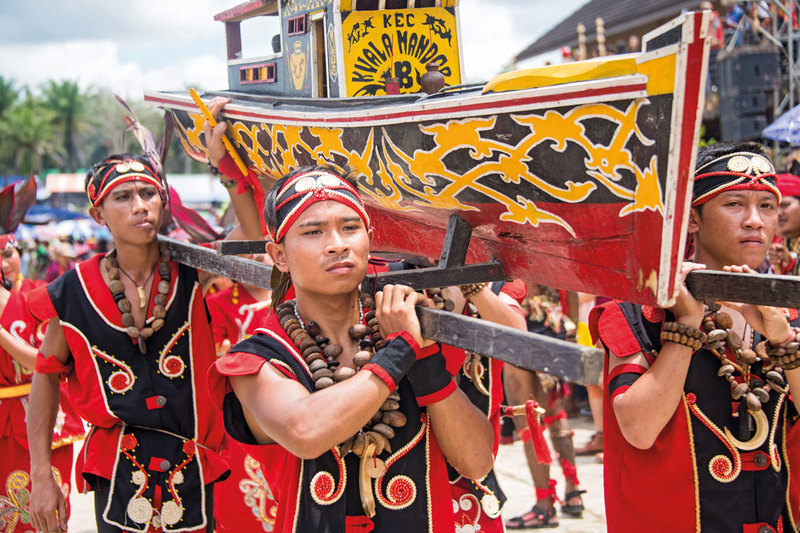 The parade was followed by an opening ceremony. This started with Panampo, which is a Dayak Kanayatn procession that pays homage to their God, which they call Jubata. Offerings are made in the form of traditional food, fruit, chicken and rice seeds, and these were carried in a symbolic crystalline container in the shape of a boat, a hornbill or a rice field. These offerings honour the forthcoming rice harvest and yield. After the procession, a traditional leader led a prayer followed by hundreds of men and women who sang and danced in front of the honoured guests, government officials and VIP’s.

After the opening, the main dance event began on two different stages. It involved children from as young as four years old. They were all so incredibly proud of their heritage and carried the real spirit of their Dayak culture. 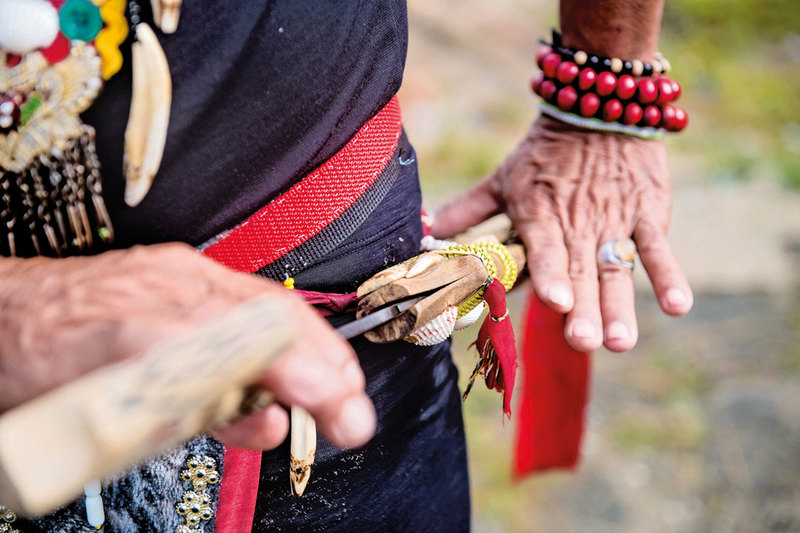 In the evening, senior dance groups that had come from all three regencies took to the stage. They performed with incredible grace, skilfully mimicking the hornbill bird and other animals sacred to the Dayak tribes of this area. All the dances, such as the Jubata and the Creation Dance, portrayed stories of significance and symbolism, which the locals were happy to explain to us.

Over the next three days, we enjoyed a dizzying variety of dancing, traditional music and various sporting events. The events represented different aspects of the local culture, such as rice pounding and woodcarving. I was particularly impressed by the unusual sport of stick racing. This involved contestants standing on two very tall wooden poles and racing each other in a relay. This was accompanied by tons of laughter and enthusiastic support from the side-lines. 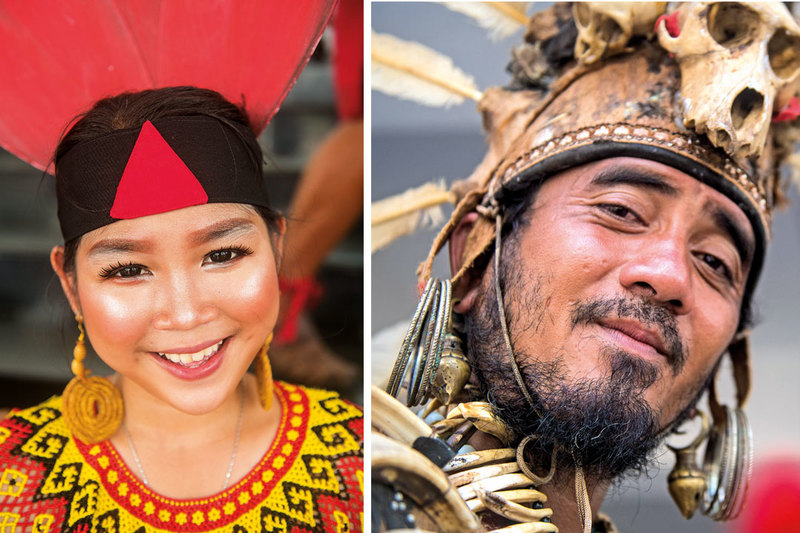 Locals love to have their photos taken, and take photos of out of town visitors, especially foreigners. We were regularly approached with cries of “Hello, mister. Photo, photo.” I am sure every local who attended the festival ended up with photos of us on their smartphones! But, despite having a little ‘photo fatigue’, we enjoyed the chance to interact with the local people. They were incredibly friendly and curious, and we were all touched by the generosity of their welcome.

Landak Regency, where this year’s event was held, offers more than the festival itself and has several waterfalls, an extensive river system you can explore by boat and many historical sights worth visiting. However, for me, the highlight was staying in a traditional longhouse in Saham village. 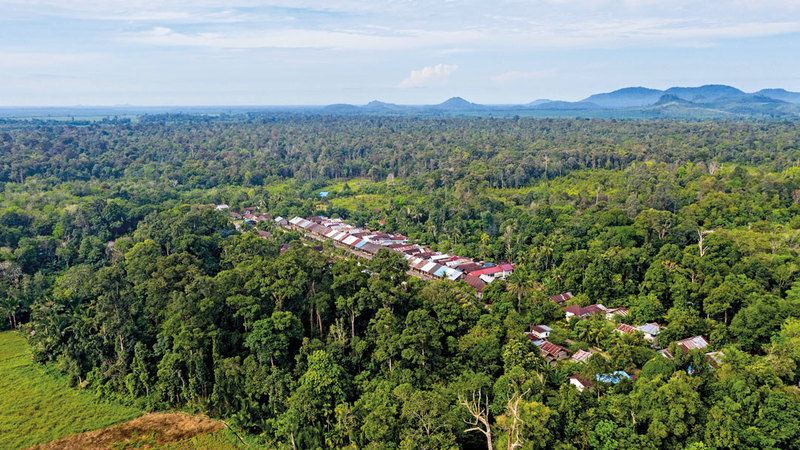 Longhouses vary in length from village to village, however, in Saham village, the very impressive 230-metre longhouse housed more than 160 people and was surrounded by primary forest. To truly appreciate Dayak culture, it is worth taking the time to stay overnight in a longhouse, as Dayak people are very hospitable. They are happy to take you into the forest and show you how they gather food, discuss the medicinal benefits of plants, and cook a delicious meal for you in bamboo tubes over an open fire. Their fascinating folk stories explain their history and strong connection with the land on which they depend. In Saham village, a dance academy teaches the children from a very early age the art of Dayak dance, and they were very keen to perform for us but on one condition—that we join in.

Soon enough, the local rice wine came out. Everyone in the longhouse soon joined the gathering, and in no time, new friendships had formed. There is a strong sense of community in these villages free from the distraction of Wi-Fi, and the tradition, adat laws and customary rituals are still very strong.

I found it very sad to see that palm oil companies have started to come into the Landak area. Despite some short term financial gains, there have not been many benefits for the local Dayak people, and when I talked amongst the locals, most said they were opposed to further development.

The locals see tourism as an alternative solution, both socially and financially. They would love to see more visitors, and many of the young people I spoke to said they would like to have a career as a tour guide and be able to show people their unique culture. This is an essential way for young people to stay in the village, after graduating from school, rather than move to the cities where they soon lose connection with their language and culture.

The Naik Dango Festival takes place on 27 April every year. It is held in different regencies in West Kalimantan close to the main city of Pontianak, serviced by daily flights from Jakarta.

If you are interested in visiting Saham village, West Kalimantan, please contact the writer David Metcalf. David Metcalf is a photographer and supports many cultural programs in Kalimantan.