Karangasem Regency in East Bali is an area of intense beauty dominated by Bali’s highest and most sacred volcano. Mt Agung’s 3,142-metre peak, and its dramatic foothills and valleys shaped by centuries of lava flows, combine to create a landscape unrivalled anywhere in Bali. The great mother temple of Besakih sits perched against this wondrous backdrop. 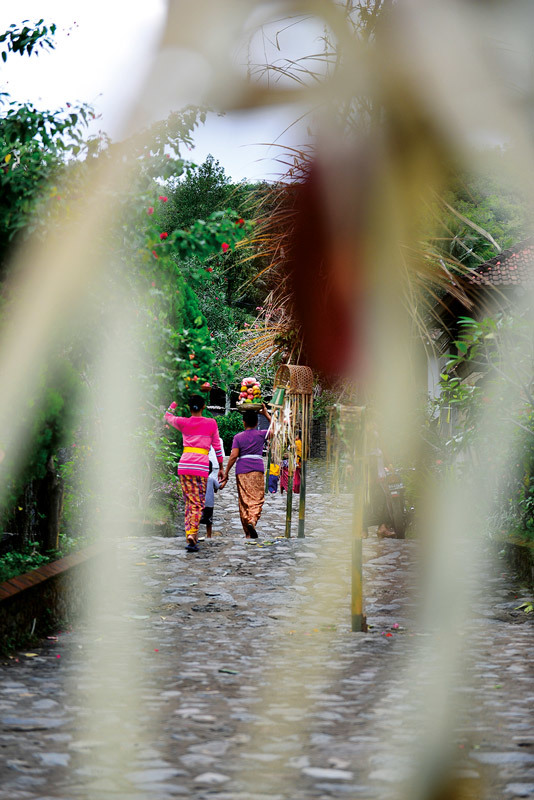 Hidden in these hills and valleys is a string of ancient Bali Aga (old Bali) villages. Bali Aga people are the original aboriginal people of Bali. They were living in Bali long before the ancestors of most of today’s Balinese arrived as part of Hindu Javanese waves of migration. The Bali Aga culture can be traced back to the 11th century. However, it is very much alive today. The Bali Aga people celebrate their culture with unique temple ceremonies and festivals that have remained virtually unchanged over the centuries.

Once entering the walled village of Tenganan Pegringsingan, 70 kilometres from Denpasar, I found myself on a wide dirt path connecting the village’s housing compounds and temples. Pointing out the path, my guide explained that the village council has voted against getting a more modern road. “The Government made the offer in 1990,” Wayan explained. “After much discussion, the two village banjars (councils) refused the offer. We like it this way, and anyway, asphalt is too hot”. 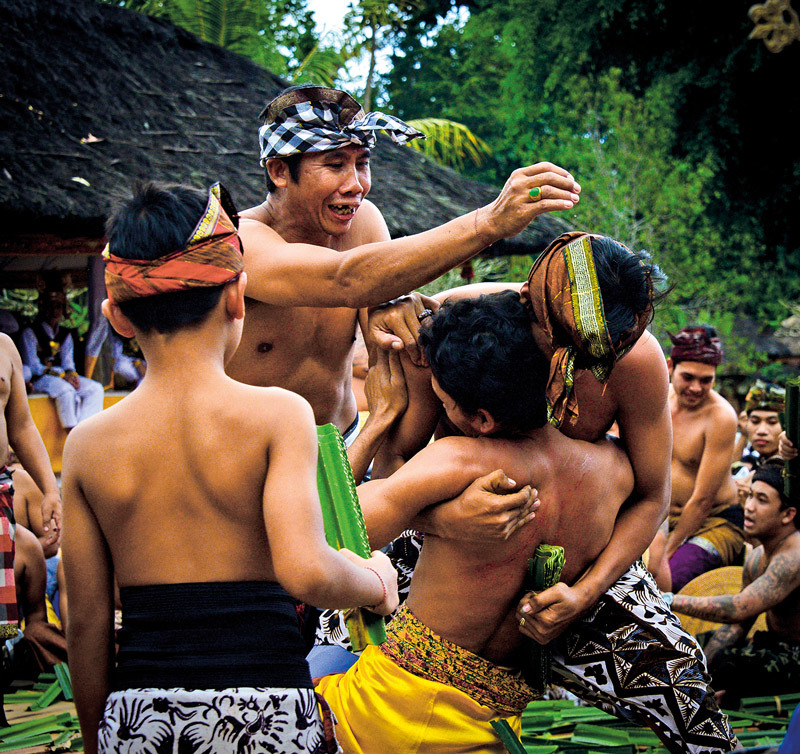 The Bali Aga people place importance on balance, and ensuring harmony with nature.  The village is organised into four associations, which help to ensure this balance and the smooth running of the community. There is an association for married men and one for married women, as well as an association for boys and one for girls.  One role of these organisations is to oversee the many community rites of passage. Children begin to learn about their roles and duties as early as seven years of age.

The calendar of temple ceremonies and festivals is full, with events involving unique arts and rituals every month. Many of these rituals involve dance, which require elaborate ceremonial dress and headgear, which is unique to the Bali Aga villages. I planned my visit in June, the fifth month of the Balinese calendar, to witness the largest religious festival, Usaba Sambah (also known as Sasih Sembah).

Wayan told me that anyone can come and see Usaba Sambah and other unique events and that his village welcomes an increasing number of guests every year. 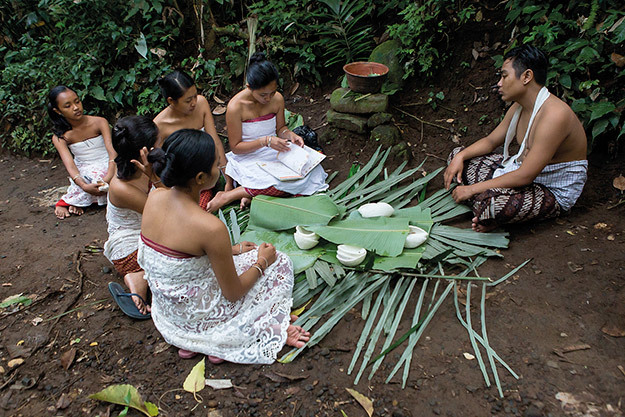 “You just missed the coconut event at Tenganan Dauh Tukad Village, a nearby Bali Aga village,” Wayan said. “This involves young boys trying to balance heavily laden coconuts on a shoulder pole, some with up to 40 coconuts.”

“The boys must dodge a hail of flying bananas.  If they drop a coconut, they get fined,” he continued. “Of course, the bananas hit them, left, right and centre and chaos reigns. This ritual is all about encouraging strength and focus, and clearly, it tests participants in this way. The ceremony is called Sabatan Biu, or Banana War.” 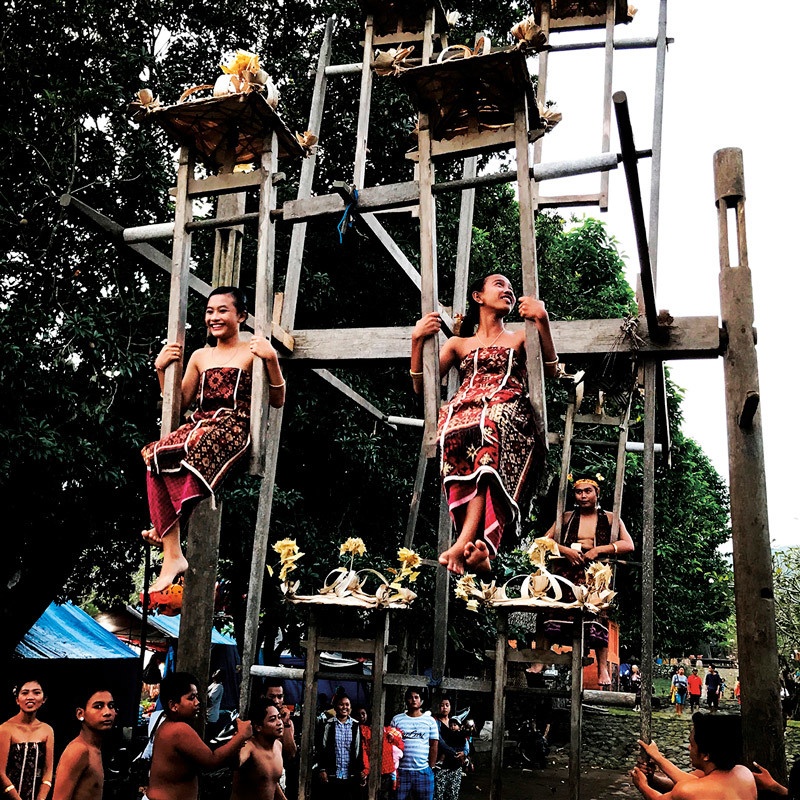 As I walked through the village, I came upon a tall wooden swing set structure. Only unmarried young boys and girls are allowed to ride on these swings in a special ceremony that forms part of Usaba Samba, which resembles the old Vedic rites of boys and girls.

I watched as the girls dressed in elaborate traditional hand spun fabric climbed onto the swing chairs. Some boys also mounted the swings while others manually propelled the swings high into the air. The girls were very flirtatious, but with a pure kind of innocence, while the boys remained stoic. As the old rotation wheel device got faster and faster, the pitch of the girl’s squeals got higher and higher. It was fascinating to watch. Wayan explained the ceremony symbolises the unity of the sun and the earth, but that it also symbolises a courtship ritual. 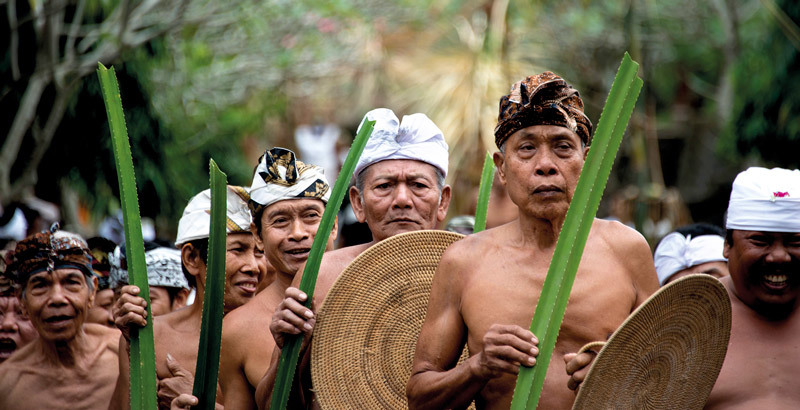 In the afternoon I ducked into one of the ikat (weaving) shops in the village and talked with the owner who confided, “Oh, I remember that swing ritual.  I got to swing on it five times, and then I was married.” She also invited me to come back the next day, at 5.30 AM to witness another very special ritual.

This ceremony involved young girls walking in single file, in delicate white lace and silk, towards the mountains. When they reached the particular place in the forest, they took part in a special ceremony which involved winding long strands of fresh coconut, cut in the forest, into each other’s hair. The girls then read from sacred texts, and Wayan explained that this was to reinforce and cultivate self-control and honesty. 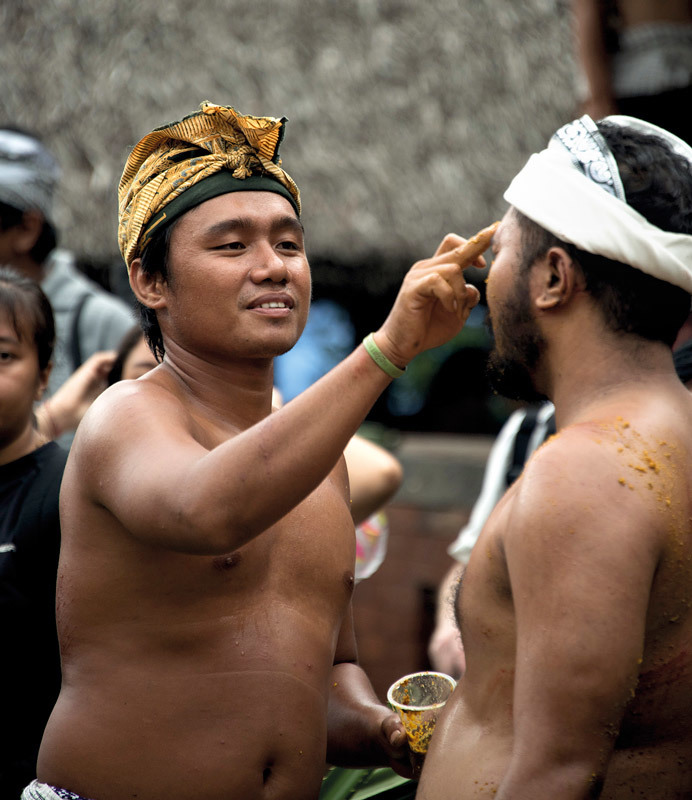 Tenganan Village adheres to many sacred rituals, combining a nurturing element with strict adherence to customary laws. Implanted from early childhood, rituals like this are deeply respected, so much so, that if you move out of the village you are not welcomed back, nor are villagers allowed to marry an outsider. Only Bali Aga people are allowed to live in the village. I was told by one of the elders that one of the village leaders recently fell in love with a German girl, and he had to move away. He can never come back to live in the village.

Around 2 PM a large crowd started to gather for the Perang Pandan (Pandan Wars). Young men and brave boys clad in sarongs prepared to engage in a coming-of-age ritual combat. They locked against each other, shoulder to shoulder in a ritualistic fight known also as makare-kare. The combatants attacked each other with thorny pandanus leaves and attempted to whip their opponents’ bodies. During the ritual blood must flow in order to honour the god Indra, the god of war. 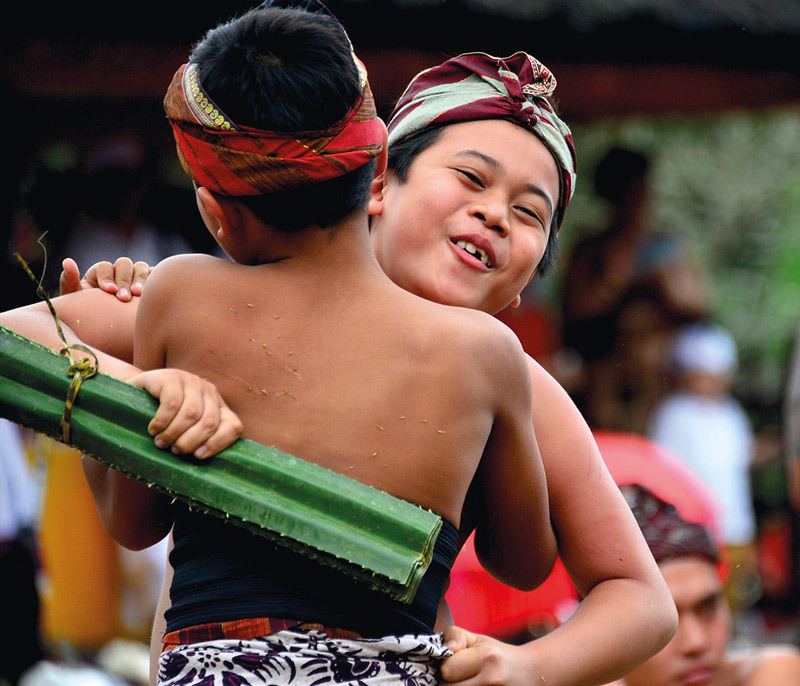 Each fighter had a woven rattan shield, although they often discarded it in the fury of the fight and I could see blood being drawn from the sharp thorns. A referee controls the battle, ensuring there was no violence at any time.

It was an honour to be so openly welcomed to Tenganan Village. Their local law decrees that no village land can be sold, and so we can be rest assured that the mysterious and colourful Bali Aga customs and traditions will remain alive well into the future. 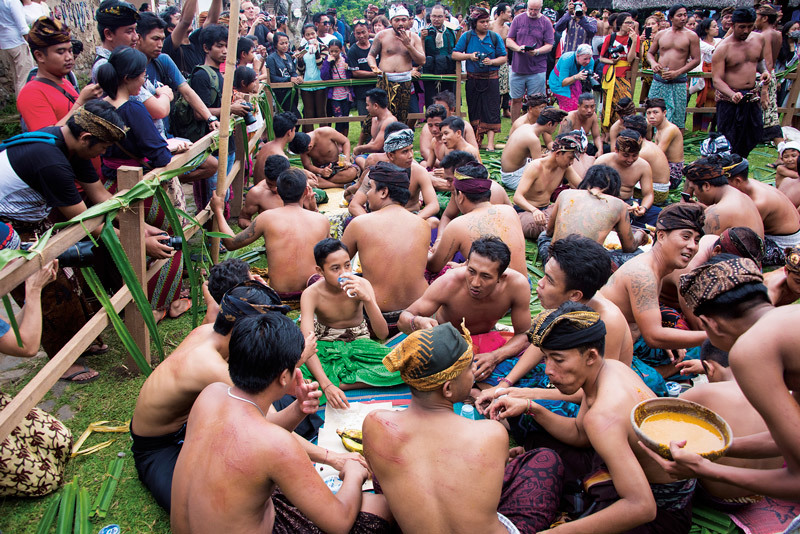 Stephanie Brookes is a travel writer and blogger with tales from Indonesia and beyond. Please see www.travelwriter.ws