Seram Island in Maluku Province of Indonesia is steeped in tradition. Deep in its mountains and along its coast, several indigenous tribes still hunt with long wooden spears and adhere to their old ways of life. The largest island in the Maluku archipelago, Seram is known affectionately as the Nusa Ina (Mother Island) and is considered the original ancestral home of all Malukan people.

I met a young Nuaulu man outside an adat (traditional) house in Runnusa village on Seram Island. Eager to share his culture, he proudly told me, “I killed a couscous as part of my initiation into adulthood. When we kill an animal, it marks our transition into manhood. In the old days, we had to venture into the forest alone and come home with a human head, from an enemy or another tribe. We were head hunters up until 1940”.

He went on to describe how things had changed. “We no longer take heads, and now we hunt animals. Also, the manhood initiation is done in groups. When the time is right, and the boys are ready, the villagers send out a group of hunters. These older men must come back as a group with the exact number of animals so that there is one for each boy to be initiated. Usually, this is a deer, couscous or a wild pig. Each animal is then killed by each of the boys, in the adat house. After this, the boy has earned his place in the village as a man, and he gets to wear the red headcloth.” I looked around at the dozen or so men nearby, some weaving and some cutting firewood or taking part in other daily village activities. I saw that, indeed, they all had a red cloth headdress. 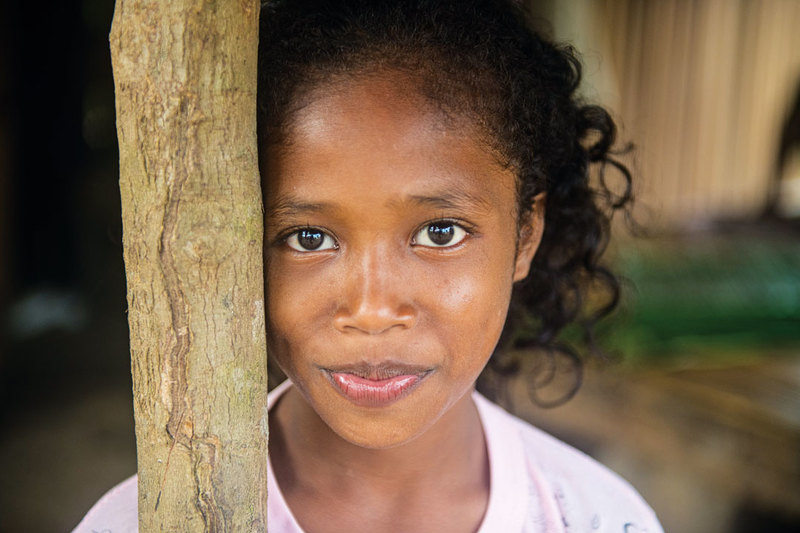 I sat with a group of women in the shade of a large leafy tree near the house and asked them a few questions about their traditions. Again, I discovered that these were very much alive, but had been adapted. “When I was a girl”, said a dignified old woman who was clearly a village elder, “I had to go deep into the forest to a sacred women-only house. This was my initiation into womanhood when I experienced my first menstruation”. She confided, “It was terrifying to be deep in the jungle on my own. Washing was forbidden. I had to allow my menstrual blood to flow, and to face it all alone”. 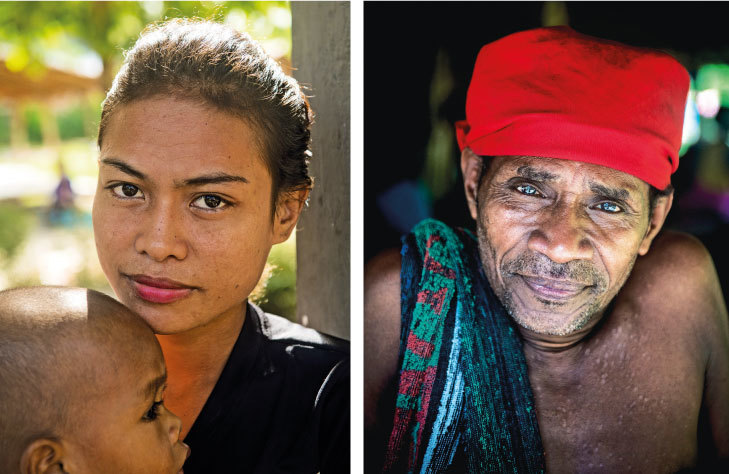 I learned from her that, now, the special women’s house is closer to the village. It is communal, and older women bring food and visit with the young girl as she transitions into womanhood. It is no longer a solitary experience for her. 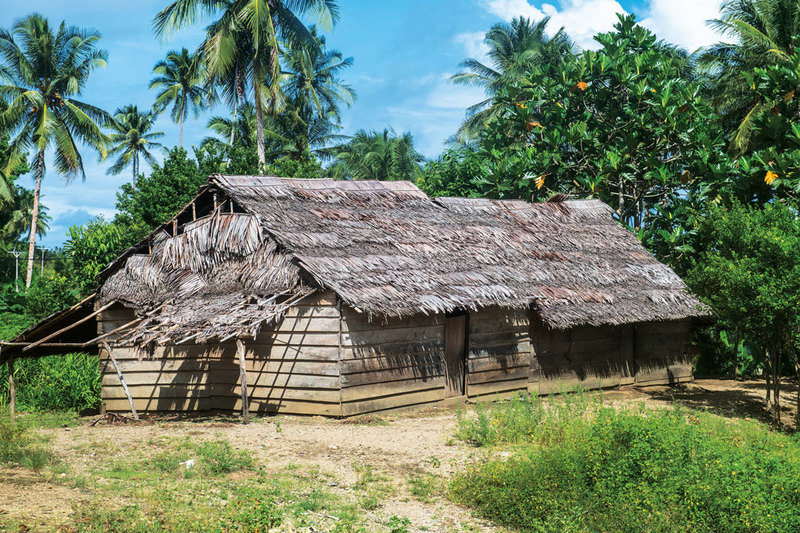 Next, I headed to a nearby platform outside one of the other adat houses. The men there were smoking, talking and weaving sago palm fronds for a new roof section. On their invitation, I looked inside the house and was immediately struck by how cool it felt. They described how their homes are always kept cool by the thatched sago roofs and the walls, which are made from the midrib of sago palm fronds. After they showed me around, we sat together a while, and one of the men started to sing. With a little encouragement from me, they were all very willing to join in. As they began to sing an old song, a drum somehow appeared. It was an old tifa drum with a deerskin covering on one end. I sat and listened to the melodic song in a language I did not know. My guide gave me a nudge, “They are singing the Kapata for you. It is special. It is a song of the Maluku people that always tells a story of an event or tradition.” It had a familiar tribal rhythm that was easy to follow. In a way that I cannot explain, I knew what that song was about and drifted to another time and place on that old wooden platform in Seram Island. 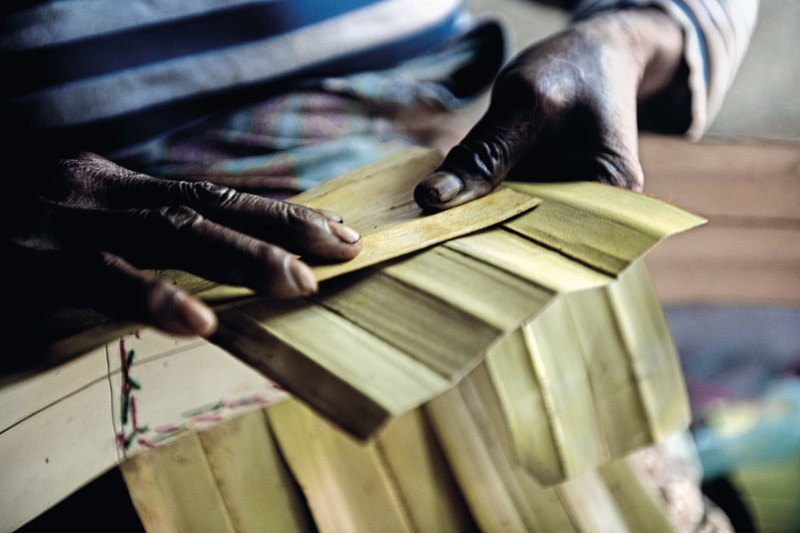 The Nuaulu tribe speak their own language, different from other sub-tribes on Seram. They have different rituals to other tribes. Even as their traditions evolve, they remain deeply meaningful and unique. I discovered that this tribe had only moved to its current location six years ago. The village head told me that Russunsa means ‘the story of the island’ in their local language. He described how the tribe had moved to Russunsa from Sepa Village.

“We made a decision to move because we wanted to practise our adat ways. Sepa is predominately Muslim, and we are animist. We blended well for a long time, but our ways are different and now we have moved, and we are very happy.” As he went back to his sago palm weaving, he explained, “We like the old ways. Like this natural roof, for example, it lasts three years. We tried the other way—using a permanent tin roof, but it’s very hot. Not good at all. The natural way is better”.

The old man went on earnestly, “We also have our own ways of doing burial rituals. There are actually two ways. One is to bury the body, but a line must be drawn before the burial takes place. This signifies that this person, this body, is now over that line and on a new path—a path to the other world. They have crossed the line and will never return”. He continued, “If it’s an accidental death, then it’s a different burial ritual. The body is placed on a raised platform above the ground, then wrapped in sago leaves and left in the jungle—not buried. We simply leave the body to the elements in the forest”.

It was getting late, and I made a move to leave. The old man warmly invited me to come back the next day, promising he would organise a traditional dance in the village especially for me. However, there were other villages to visit. That evening, I was heading to Piliana Village, known as the village above the clouds. I was to spend a few nights on the edge of the Manusela National Park. Pilana was home to another tribe, the Alune. Even though it was only an hour down the track, I knew I would hear a totally different language and find very different traditional ways.

I felt very honoured that the Nualulu people had been prepared to share so much with me, as someone just passing through. The stop-off was not planned, and they had not expected me, yet they had received me with such kindness. I was so happy to learn a little about their daily lives and their adat ways and understand a bit more about the original Maluku people of the Mother Island.

Community Education: I travelled to Seram island with two team members from Heka Leka, a non-profit education foundation, which has been running a literacy program in the Malukus since 2011. Based in Ambon, Heka Leka’s team delivers books and teacher training workshops to marginalised remote villages in the islands. Using education as a tool to fight poverty, the foundation focuses on improving the quality of teaching and empowering local communities. Heka Leka has helped more than 100 villages.