The Whale Hunters of Lamalera

I sat on the beach at Lamalera Village, only a couple of metres from a giant whale carcass, and chatted with my new friend, Benjamin. “We are devoutly Catholic here in Lamalera,” he said. “From late April to early May, our priest conducts a mass to open Leva Nuang, the season when the local fisherman go out to sea.

During the season, we can catch big fish like marlin, mantas, mola molas, dolphins and whales”, he continued. “The priest prays for our success and for our safe voyage. Only after this ceremony can we go out and hunt whales. Our traditional boats don’t have engines, and we just use oars. This has not changed over hundreds of years. We also use these”, he said, handing me a long barbed bamboo harpoon. “Not everyone can be a lama fa, a harpooner. Only one male from each family is taught by his father to take on the role.”

Benjamin went on to explain that the lama fa holds an esteemed position in his family and the community, but that he must also make sacrifices. He must stay focused at all times and not be distracted by anything whether at sea or on land. Sometimes a lama fa may decide not to join a hunt because there is trouble at home. If there is a domestic argument, for example, he is actually forbidden from going out to sea. Also, he cannot have sex between May and October, the official whaling season. “So, no arguing with the wife between May to October and no hanky-panky”, Benjamin said with a chuckle.

In some cases, but it is not very common, a boatman can work his way up to becoming a lama fa after many years of being a water bailer or whale spotter. Boys as young as five years of age can often be seen throwing little hoops and engaging in a mock harpoon hit.

It’s all action stations when a whale is spotted. The whole village hears the cry, “baleo, baleo”. This is usually shouted from high up on the hilltop, from where the locals scan the Indian Ocean for whale spouts. 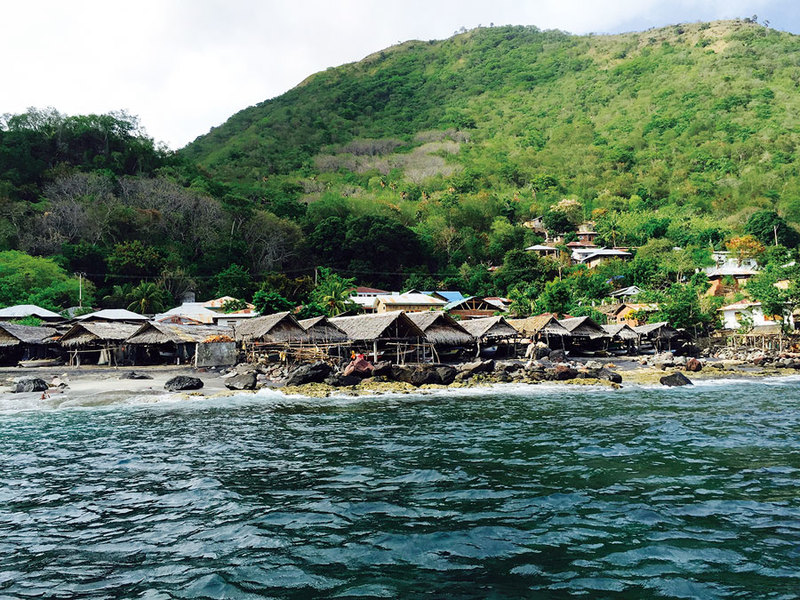 After the call goes out, there is a flurry of activity as the boats are quickly hauled out from their simple shelters. It’s a community effort and the boats all set sail in unison. These traditional boats, called peledang, venture out to sea with 7 to 14 crew, including a helmsman, oarsmen and a couple of lama fa.

Just before I reached the village, a whale had become stranded in a small nearby bay. The whole village was out to save the whale. It seemed ironic that they saved a whale in one bay only to slaughter a whale in the next bay. My guide, Poly, explained, “On Lembata Island, we all love the whale. We grow up singing songs of the whale and hearing tales of the whale and we have tremendous respect for these giant creatures of the sea. It is only off Lamalera Village, and Lamakera Village on our neighbouring island of Solor, that whale hunting is permitted”.

The whale had come in on the high tide chasing krill and then become trapped at low tide. When I arrived a team of marine scientists from Jakarta were working with village locals to coax him out of the inlet so that he could be on his way. I hoped for the whale’s sake that this would be in a different direction to Lamalera.

The history of whaling on Lembata Island is indeed a long one. Portuguese documents dating back to1643 include local whale hunting stories.

Local whaling has always been on a subsistence basis. The whale meat, blubber, skin, organs and oil (which is obtained from the blubber) cannot be traded for cash. They can only be exchanged for vegetables, fruit and rice.

Once a whale is killed, the meat is divided among the villagers, with the lama fa getting a largest cut of the stakes. One whale feeds a whole village. Because it is part of ancient beliefs and traditions, the whale hunt is exempt from the international whaling ban. Studies conducted by whaling authorities have indicated that the number of whales taken in Lamalera and Lamakera do not have a significant impact on the general whale population.

The history of whaling on Lembata Island is indeed a long one. Portuguese documents dating back to1643 include local whale hunting stories.

As I became a little more comfortable sitting in between massive bones and slabs of blubber laid out for salt curing, Benjamin elaborated on the hunt. “The most agile lama fa stands on the bow of the boat ready to strike. His harpoon is attached to the boat with a rope. When he gets close enough, he launches himself from the boat with his harpoon, hopefully making a direct hit. 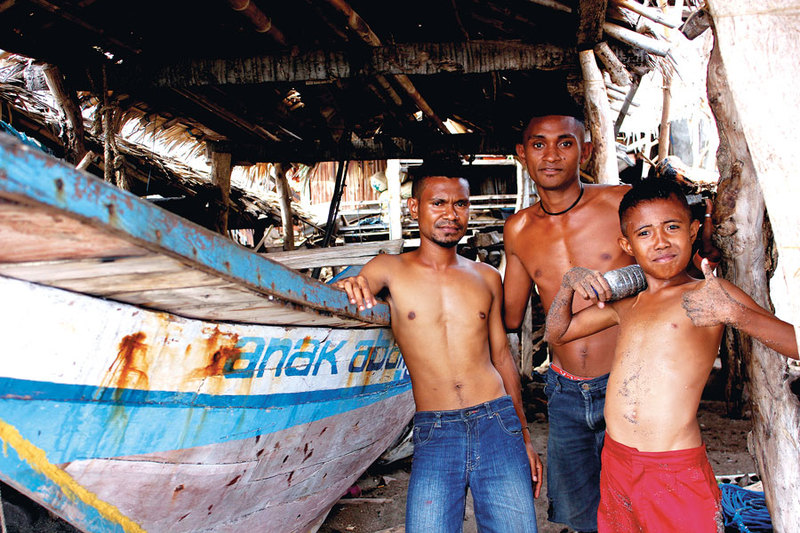 His body adds extra weight, which helps the harpoon to pierce the thick skin of the whale. More lama fas then join the pursuit, making their strikes to try to put the whale out of his misery quickly.” He continued, “It is very dangerous. The whale thrashes about and often dives deep to escape. The lama fas must scramble back to the boat. If they do not make it back quickly, they can be dragged out to sea at quite a speed. I have heard stories of lama fas being dragged all the way to Australia. Sometimes we lose one or two. It happens”.

After the whale is finally dead, the crew pulls it onto the boat. This can be quite a feat, as the whales can be 15 metres or more long.

In October, a religious ceremony marks the end of the season, after which no more whales can be taken. It’s back to normal domestic life and general fishing.

Traditional whaling is incredibly difficult and unpredictable work. The village chief told me that the hunters did not even catch one whale one year. “We never know,” he said, “But in August this year, we got five whales”. According to their oral history, the village chief told me traditional whaling has been done the same way since the 14th century. “We could not survive if we relied on whaling only”, the chief said. “As well as catching marlin and other fish, we earn money from weaving. This is another practice handed down through generations. Our hand-spun, hand-woven textiles are among the best in Indonesia. People come to this village from all over the world just to buy ikats and fine cloths made by our women weavers.”

In October, a religious ceremony marks the end of the season, after which no more whales can be taken. It’s back to normal domestic life and general fishing.

This village of around 2,000 people provides an authentic snapshot of the past. The Lamalera whale hunters are one of the last communities in the world to hunt whales traditionally, and are classified as aboriginal subsistence hunters by the International Whaling Commission. Armed with only oars, bamboo harpoons and ropes, they continue to employ sustainable practices and honour a whaling tradition which spans many centuries.

Boat:
- A ferry once a week from Kupang
- A daily boat service from Larantuka, Flores Island to Lembata Island.

Accommodation: Homestay only.
- Mama Maria Homestay is located just 100 metres from Lamalera Beach. It is a traveller-friendly stay with western toilets and beds equipped with mosquito nets. Maria provides meals: breakfast including local bread and coffee, lunch including nasi ikan (fish and rice), and dinner including mie rebus (boiled noodles) with fish, and coffee Some books about Lamalera are available in Maria’s small library.
- Ben’s Homestay is located on the hilltop with great views of the small beach and village. It is run by a friendly lady, Ibu Udis. This is basic but very clean accommodation, which also provides meals. You can reach Ibu Udis at +62 813 8326 6681.

Other activities: fishing trips and snorkelling