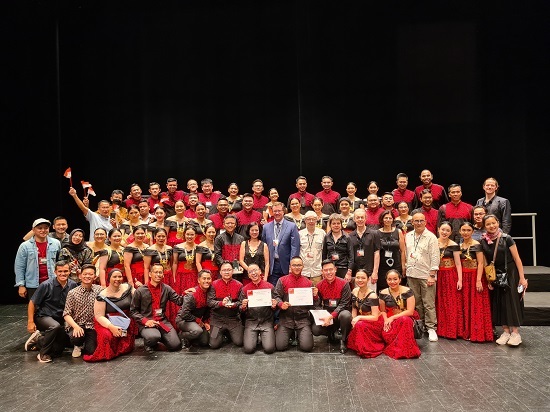 Batavia Madrigal Singers (BMS) won the 31st European Grand Prix for Choral Singing (EGP) 2022 which was held at the Grand Theater in Tours, France, on 19 June. This victory is also a birthday gift for BMS, which this year celebrates  26 years of hard work and exceptional achievement.

BMS was selected to appear in this prestigious international choral event because in 2019 it managed to become the overall champion in the Certamen Coral de Tolosa (Tolosa Choral Competition) competition in Spain. In the same competition, BMS also won two First Place titles, namely in the Polyphony category, Basque and Popular Music category, and received the Audience Choice Award (Audience Favorite).

In addition to BMS, participating in the EGP event this time were the University of Padjadjaran Student Choir from Indonesia (general winner of the Concorso Polifónico Guido d'Arezzo 2019), Jāzeps Vitols Latvian Music Academy Mixed Choir from Latvia (general champion of the International Choir Competition Gallus) and the SŌLA Choir of the Latvian Academy of Culture who is also from Latvia (general winner of the Florilège Vocal de Tours).

In this year's European Grand Prix, each EGP finalist prepares a free performance program with a duration of 22 to 26 minutes and involves works from 3 different eras.

There were seven judges who judged the performances of the candidates, namely Brady Allred from Salt Lake City, United States, Martina Batič from Slovenia, Roland Hayrabedian from France, Simon Kim Phipps from England, Mikael Wedar from Sweden, and Adrian Pop from Romania.

“On behalf of BMS, I would like to thank God Almighty and thank all parties who have participated in preparing us to become champions at the 31st European Grand Prix for Choral Singing (EGP) 2022. We are very proud and of course very happy, even though this championship was postponed for two years due to the COVID-19 pandemic. After this event, BMS will always give their best performances, not only in every show, but also bring Indonesia's name in every well-known international competition that we participate in." said Avip Priatna, Founder and Director of BMS.

Now! Jakarta congratulates Pak Avip and the whole team on another amazing victory. Every performance by this choir is a masterpiece and celebrates Indonesian talent –and discipline- on a world scale. Well done again, you are all something that Indonesia should be proud of. Perhaps it’s time for The President to recognise Indonesia’s extraordinary talent? And of course do not forget the sponsors and donors who make this all possible.