The Ubud Writers & Readers Festival (UWRF) is set to return in full force this 27-30 October 2022, bringing writers, readers, activists, artists and performers back to Bali’s cultural capital of Ubud. World-renowned authors and thought-provoking discussions will be abound, many focused on this year’s festival theme: Uniting Humanity.

Organised by Yayasan Mudra Swari Saraswati, UWRF was founded as a means of stimulating the Ubud economy and morale after the first Bali Bombings. The festival thus returns to its original mission after two years of challenging times for Bali. With the world fraught in conflict and recovery, the festival’s theme is ‘Memayu Hayuning Bawana‘, an ancient Javanese philosophy that means the principles by which we care for, protect, and beautify our universe.

Bawana, refers to ‘our world’, which is not only a physical space but also a cultural and deeply spiritual realm. ‘Memayu’, is the way we sustain the beautification of our planet on our eternal path to universal harmony. UWRF translates this philosophy into ‘Uniting Humanity‘, which will unfold as a series of programs responding to humanity’s capacity to strengthen our ties as individuals and the world as a collective. Thus, the programs at this year’s UWRF will feature topics and speakers that discuss what binds humanity together and, conversely, what pulls us apart.

The festival has announced its current lineup of speakers, including Putu Oka Sukanta, a prominent literary figure in Indonesia, who will be discussing his trilogy of novels that reflect the political conditions of the New Order. A fictionalised memoir of his life, the trilogy has been translated into English by Keith Foulcher and published this year by the Lontar Foundation.

One of the festival’s 2015 Emerging Writers, Norman Erikson Pasaribu, is set to make his return to UWRF, where his short story collection, Happy Stories, Mostly, was long-listed this year for the 2022 International Booker Prize. Indonesian filmmaker, Kamila Andini, will discuss her Platform Prize-winning film, Yuni, a coming-of-age story which explores womanhood and patriarchal traditions in Indonesia.

Award-winning American journalist and author, Carla Power, will speak on deradicalisation. Her new book, Home, Land, Security, is an eye-opening and ground-breaking analysis that uncovers the surge of division and radicalisation in all forms, both at home and abroad, diving into the controversial field of deradicalisation which is told through stories of former militants and the people working to bring them back into society.

Prolific Turkish contemporary poet, Bejan Matur, will perform her music-accompanied pieces that mirror how she engages mythology and mysticism throughout her award-winning body of work. Osman Yousefzada, a British interdisciplinary artist and renowned designer, will share stories behind his first book, The Go-Between, a memoir that chronicles his childhood growing up amidst different worlds in a closed migrant community.

Through his debut novel, Radiant Fugitives, a Finalist for the PEN/Faulkner Award for Fiction 2022, Nawaaz Ahmed explores the political-as-personal in a bold new voice that examines the tensions between ideology and practicality, hope and tradition, forgiveness and retribution for one family manoeuvring a changing political landscape.

Kylie Moore-Gilbert will discuss her new memoir, The Uncaged Sky, which recounts her experience of being arrested and detained by Revolutionary Guards in the notorious Evin prison in Tehran for 804 days. Indonesian novelist, social worker and journalist, Ahmad Fuadi, will talk about his award-winning literary work, and put a spotlight on Komunitas Menara, a social foundation he established to help educate underprivileged children in Indonesia.

The UWRF program is filled with rich, immersive and engaging events that range from panel discussions, literary luncheons, writing workshops, music and art performances and film screenings. From day to night, a tapestry of literary, artistic and cultural events is on display, with an engaged audience that adds to the entire experience.

For tickets, schedules and lineup information head to ubudwritersfestival.com 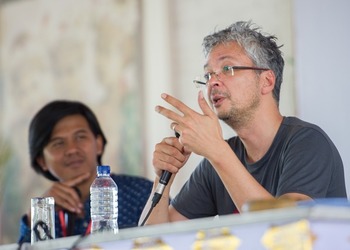 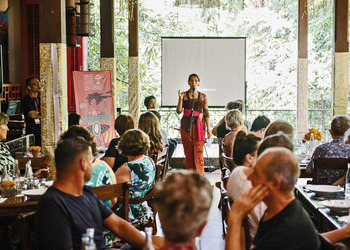