The European Union (EU) has spread its development assistance in Indonesia in the last ten years to support efforts against climate change and deforestation and trade. With H.E. Vincent Piket being appointed as the new EU Ambassador to Indonesia in November 2019, the cooperation is expected to leverage with concrete projects.

Prior to his assignment in Jakarta, H.E. Vincent Piket has a solid knowledge and expertise in the Asian countries as he served as EU Ambassador to Malaysia (2008–2012) and as EU Ambassador/Head of EU Office to Hong Kong and Macao (2012–2016).

Later in December, the Ambassador successfully organised the first press conference and media gathering, signifying key achievements and challenges of 2019 for the EU vis-à-vis Indonesia, as well as sharing some of the top priorities on what lies ahead for EU-Indonesia relations in 2020. Together with the EU Delegation to Indonesia and fellow journalists, H.E. Vincent Piket shared an interactive discussion that points out cooperative programmes with different sectors.

As the European Parliament plans to expand in Indonesia, the EU-Indonesia partnership and cooperation agreement were signed. In the economic field, the EU views Indonesia as an important partner in the region especially as a potential market and source of raw materials. Indonesia’s main issues in the field of economic and development include securing the Comprehensive Economic Partnership Agreement (IEU-CEPA) negotiations runs well in a balanced manner.

In terms of Trade Barriers, both parties work together to enhance health and technical standards, in particular with Indonesia’s export products to the EU so as not to become a trade barrier. 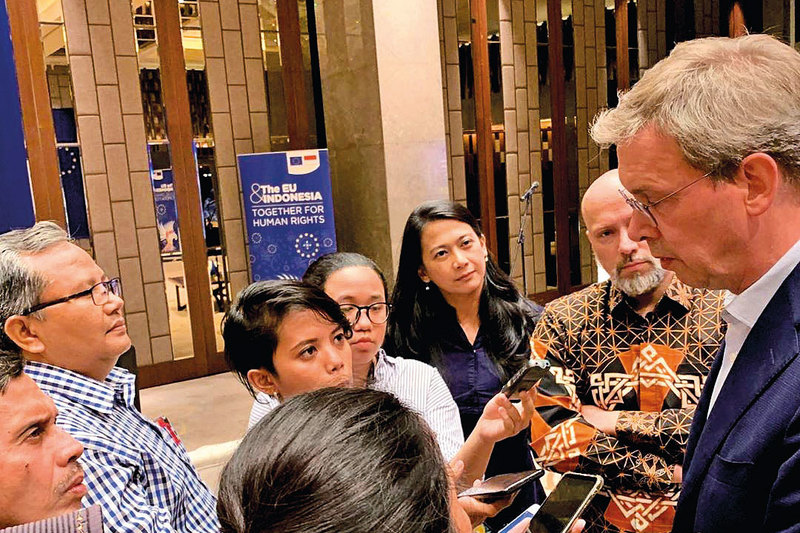 As of bilateral mechanism, Climate Change and Forestry has been one of the top priorities in the agreement and negotiations. “Generally, at the end of the day it has to be with deforestation and land-use change for the purpose of producing crops. The methodology has been applied to regardless of the crops they’re made of. We are convinced that the scientific basis is sound. The system is being reviewed regularly, and we will have a revision coming up by June 2021,” the Ambassador explained.

Moreover, the EU and Indonesia have significantly worked together to accomplish the operationalisation of Law Enforcement, Trade Governance in the Forestry Sector (FLEGT) – the new regional funding on peatlands and biodiversity as well as additional possible thematic and global funding linked to Indonesia’s new policies in combatting deforestation and licensing for timber products.

Meanwhile in the fields of Politics and Security, the EU and Indonesia are committed in accelerating the development of peace forces cooperation, dialogue on human rights, cooperation in counterterrorism, violent extremism and radicalisation and experiences in countering and prevention and the establishment of security dialogues and cross cultural border issues and maritime and fisheries.

Delegation of the European Union to Indonesia and Brunei Darussalam