The Dharmawangsa’s Executive Chef Felix Budisetiawan first fell in love with food and cooking as a kid, by watching his mother preparing meals and helping her out in the kitchen. 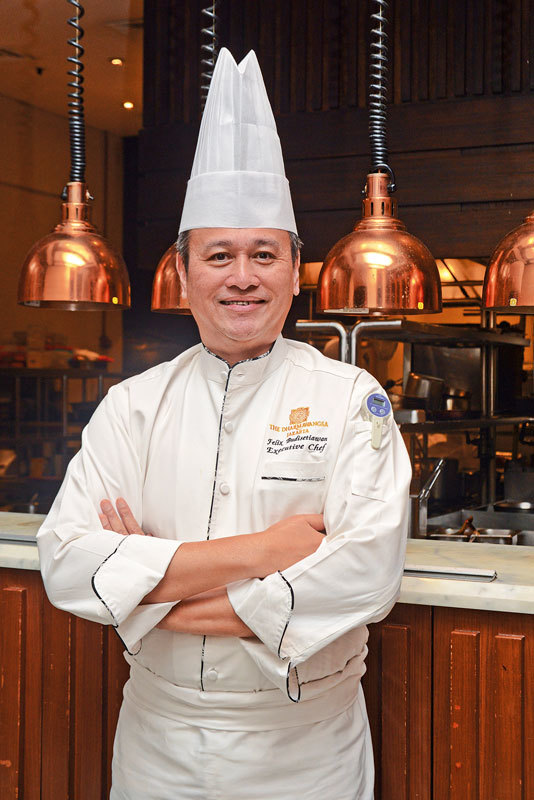 Growing up on the Island of Gods, Chef Felix decided to enroll in a hotel school in Bali, majoring in food production. From there, his professional career has led him to various restaurants and hotels across Asia and the US before eventually joining The Dharmawangsa as Executive Chef in January 2015.

The recipient of NOW! Jakarta’s BRBCA 2017 Chef of the Year Award, soft-spoken and friendly Chef Budi says that he was influenced by many of the chefs he has worked with throughout his career.

“My mentors came from many different countries, including Switzerland, Germany, France and the UK,” he said. “They have all helped me to build my career and taught me that I always have to be prepared to give my best if I want to accomplish something. They also taught me that I have to honor my promises.”

At The Dharmawangsa, Chef Budi is responsible for the hotels’ F&B outlets and restaurants. He oversees breakfast, lunch and dinner as well as special events and banquets. His daily activities also include accommodating last minute requests, cooking for VIPs, checking the quality of the ingredients and the kitchen equipment.

“This hotel has been around for 20 years now, and it still keeps the original equipment in the kitchen,” Chef Budi said. “This only shows how committed The Dharmawangsa is to maintaining a high quality.”

Indeed, it is one of his favorite things about working at The Dharmawangsa: the focus on high quality, the effort to elevate authentic and traditional Indonesian cuisine to the next level, without being pretentious.

“When guests from abroad go back to their home country after visiting Indonesia, I would like them to say that the best local food they have tried was here at The Dharmawangsa,” Chef Felix explained.

According to the chef, Indonesian cuisine has become more popular over the last couple of years and has tightened its grip on the international culinary scene as well. People know now, he joked, that Indonesian food is more than just rendang and nasi goreng.

“There has been an increase in the number of restaurants in Jakarta that focus on upscale Indonesian cuisine,” Chef Budi said, adding that he still enjoys eating at a warung from time to time and also suggests his kitchen staff to do so to get a taste of the real Indonesia.

“I have a very solid team, consisting of local and talented chefs,” he stressed. “Without them, we wouldn’t be able to maintain the high standard of the hotel’s restaurants. It is important to have efficient teamwork. As long as you are happy in your work environment, your performance will automatically be good. When things become hectic or stressful, I simply take a short break, have a cappuccino or jamu and then continue working.”

When asked about his philosophy in the kitchen, Chef Budi answered in one word: simplicity. Even with the simplest ingredients, he said, one can create the most mouthwatering dishes.

It is the same simplicity that comes to his mind when envisioning his future.

“Ten or fifteen years from now, I would like to own a farm somewhere in Indonesia with traditional bales overlooking a huge garden, where I can conduct cooking classes and provide a unique culinary experience to my guests,” he said, with a smile. “I have been dreaming about this for a while now - hopefully, my vision will become reality someday.”