A new exhibition at Plaza Indonesia encourages children to interact with and learn more about modern technology. 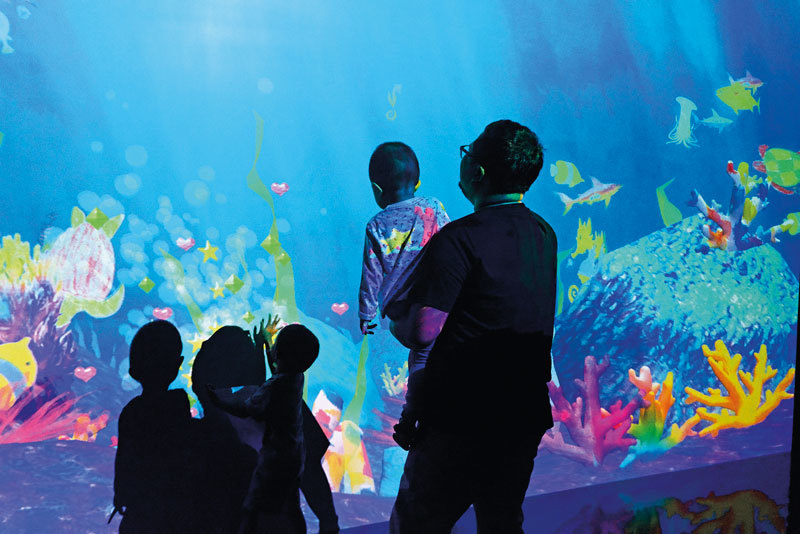 It seems like a lifetime ago when children still climbed on trees, played with their dolls or train sets and didn’t need much more than crayons and a blank piece of paper to keep them happy and occupied.

Kids these days have other needs and desires: they are often spotted glued to a smartphone or tablet, playing games or watching videos. Modern technology has changed the way we live - starting at an early age.

“We can’t stop the development of technology, so we might as well embrace it,” said Astri Abyanti, Plaza Indonesia’s senior manager of digital marketing and public relations. “And if we use it correctly, technology can encourage kids to be creative by using their imagination and interact with their friends.”

Created by teamLab, the exhibition was successfully held in Japan, Italy and Singapore, attracting more than 5 million visitors in total, before making its way to Indonesia. teamLab, an art collective that was first established in 2001, brings together professionals from various fields in the digital society: artists, programmers, engineers, CG animators, mathematicians, web and print graphic designers and editors. 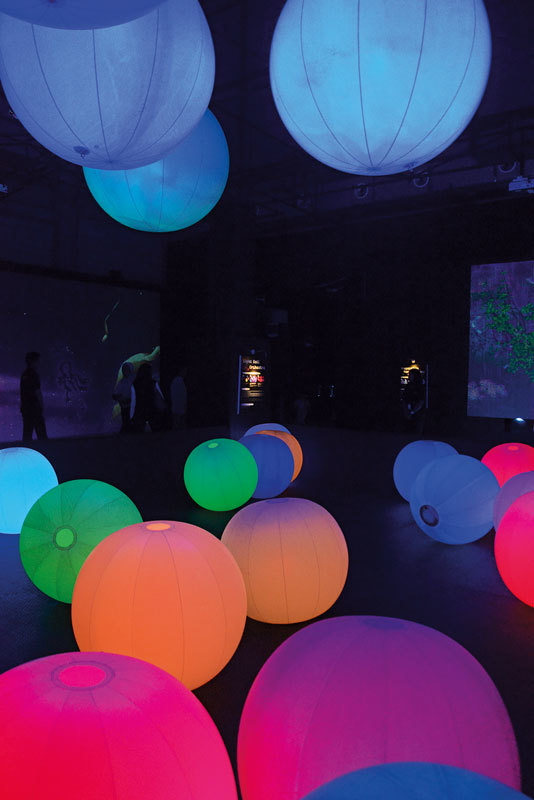 Referring to themselves as “Ultra-technologists,” the group aims to go beyond the boundaries between art, science, technology and creativity, through co-creative activities.

The result is a magical, colourful and interactive playground that enchants both children and adults alike, located at Plaza Indonesia’s The Warehouse on over 700 square meters.

He added that teamLab might consider bringing Future Park to other cities in Indonesia, depending on the response from the audience in Jakarta. In Tokyo alone, the exhibition was visited by more than 470,000 people.

The exhibition consists of seven different installation artworks, all of which are interactive and educative at the same time. Here is a list of the installations and how to use them: 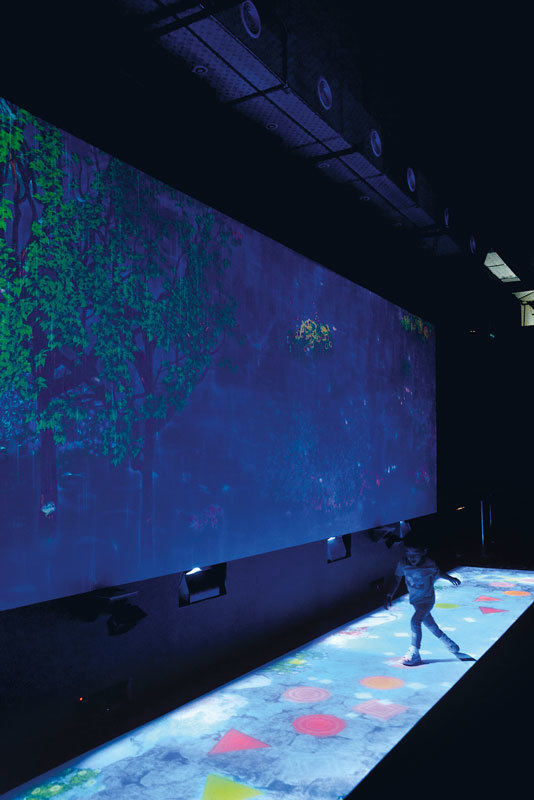 Story of the Time when Gods were Everywhere
As the symbols on the screen are touched by children, they evolve into the images that they represent. As more images are created by this tactile function, a story begins to emerge. The objects that emerge from the symbols influence one another and are influenced by the actions of other people. For example, a bird lands on a tree, a sheep runs away from a dog, and a sheep dances as a child approaches it.

Sketch Aquarium
Children can observe the power of their creative imagination through Sketch Aquarium. Each participant is invited to color a drawing of a sea creature of his or her preference. Once completed, the paper is scanned and the image is projected onto a giant virtual aquarium. Children will be able to see their creation come to life and swim with all of the other sea creatures. Children may also touch the fish to see them swim away, or touch the virtual food bag to feed the fish.

Sketch Town
Sketch Town is a town that grows and evolves according to the pictures drawn by children. After the 2-D drawings of the cars, buildings, UFOs and spaceships are completed, they are scanned, become 3-D and enter a virtual 3-D townscape. Every component of the town has a role to play: the fire trucks and cranes, for example, serve to protect the town. Children can interact with the final townscape by touching individual components to alter their behavior.

Sketch Town Papercraft
Pictures drawn in Sketch Town can be turned into unique 3-D papercrafts, which children can take home. The process of creating 3-D objects helps children understand spatial perspective. This process also links the translation of the 2-D drawing into the 3-D object, breaking down the barriers between the digital and the physical. This activity involves problem solving skills and logical thinking, as children have to identify where to cut, fold and glue.

Connecting! Block Town
In Connecting! Block Town, cars and trains run along digitally projected roads and railroad tracks that are connected by physical wooden blocks. As children place different blocks on the table, more cars and trains appear, forming a townscape. Children play by placing the blocks in different positions to create a town collaboratively with other children. 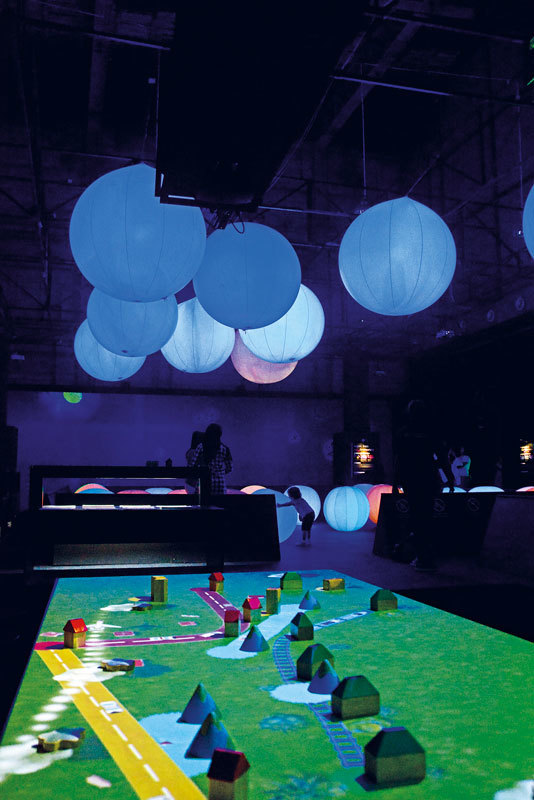 Light Ball Orchestra
Rolling a light-ball changes its colour and sound. Combined, the light-balls form an orchestra. The overhead balls communicates with the other balls: touch one and the surrounding balls will be affected, changing the colour of the entire space. Roll the ball in front of you and it will change colour and release sound. In the same space participants use their bodies, touching the different-sized balls to change the colour of the space and make music.

Hopscotch for Geniuses
This hopscotch uses circles, triangles and squares. When children land on the shapes projected onto the floor, they create sounds and a colorful picture. Landing on the same shapes or same colors in succession creates beautiful colors and sounds. Children use their entire bodies to play, and more advanced children can change the space in an instant by finding connections between shapes and colors. It is training for both the child’s mind and body. 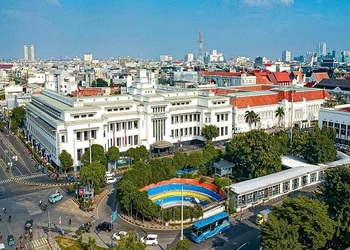 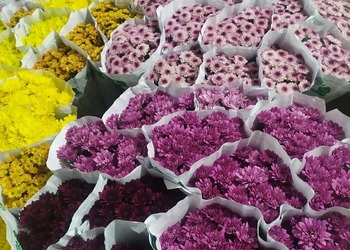 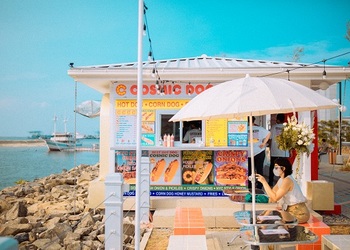