Jakarta is not only Indonesia’s political and economical epicentrum, but it also serves as the country’s cultural hot spot, not least thanks to a number of art spaces and cultural centres such as Taman Ismail Marzuki, Gedung Kesenian Jakarta, and Salihara. Find out how these institutions have shaped the capital’s art scene - and continue to do so.

Taman Ismail Marzuki (TIM), Central Jakarta
Named after the famous Indonesian composer, musician and songwriter Ismail Marzuki (1914–1958) who has written over 200 songs during his life, TIM’s area is composed of several buildings meant as venues for art performances and exhibitions such as Graha Bhakti Budaya, Galeri Cipta II and III, Teater Kecil (or Teater Studio), Teater Halaman, as well as Teater Jakarta. It is also home to the city’s art institute Institut Kesenian Jakarta and Planetarium Jakarta.

TIM officially opened for public in November 1968 and many Indonesian and foreign creative individuals or groups have performed here since, stunning the crowds with their works in the field of music, visual art, dance and theater, including Arifin C. Noer, Affandi, Farida Oetojo, Teater Koma, and many more. Last year, TIM was the venue for a ballet show called “Once”, presented by Australian and Indonesian ballet dancers. 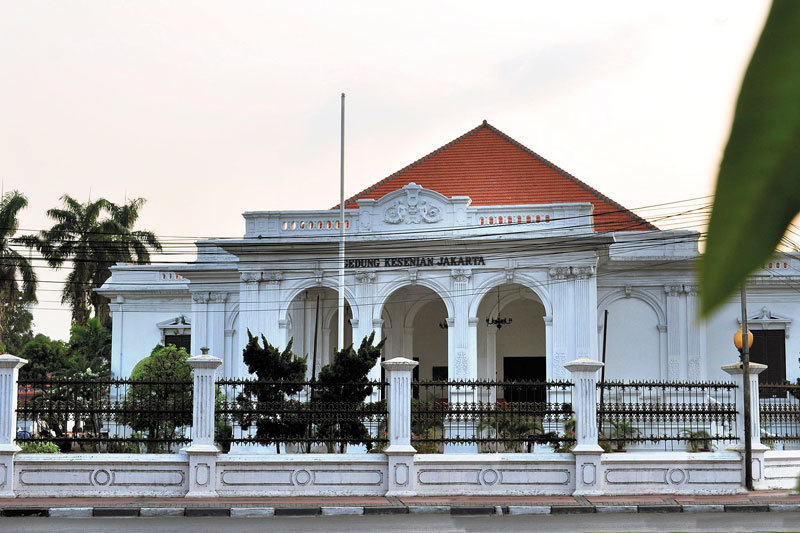 Gedung Kesenian Jakarta (GKJ)
Gedung Kesenian Jakarta, which literally translates as Jakarta Art Building, has existed since the 19th century. Because it was constructed during the time of the Dutch colonization, it was first referred to as Batavia Schouwburg. Initially, the building was made of simple bamboos, but was replaced with a more permanent structure years later.

Architect J.C. Schultze was assigned to design the building, which was then finished in 14 months. The newly-transformed building drenched in neoclassical influence was later called Schouwburg Weltevreden. Shakespeare’s “Othello” was the first performance after the year-long construction.

Throughout the past centuries, GKJ had many different functions, and not all of them necessarily were connected to the arts. The Indonesian Local Youth Alliance held its first Kongres Pemuda (Youth Congress) here in 1926, whereas the Komite Nasional Indonesia Pusat (Central Indonesian National Committee) which was a body to assist the first president Soekarno and the recently-born Indonesia had its first meeting there in 1945. The country’s leading educational institution Universitas Indonesia once used the building as its Faculty of Economy and Law.

Nowadays, GKJ is a venue for high quality art shows and performances, showcasing both local and foreign talents.

Komunitas Salihara
Situated in Pasar Minggu, South Jakarta, Salihara is the first Indonesian private multidisciplinary art centre and has welcomed lots of local and international artists from various genres to entertain the country’s art lovers through theatre, music, dance, and more. It was established in 2008 by Indonesian writers, artists, journalists, and art activists who share a genuine passion for art and want to preserve it.

As it is not owned or managed by the government or a foreign embassy, Komunitas Salihara is completely independent. It presents art shows and programmes on a regular basis such as the biannual Salihara International Performing Arts Festival.

Another regular event is the Salihara Literary Biennale that promotes both Indonesian and global literature through literary readings, book discussions, workshops and school or campus visits. Other routine programmes include Salihara Theaterfest, Salihara Jazz Buzz, Salihara Dancefest also known as Helatari, and World Music Forum. Classes, lectures, and discussions on art and literature are also available on a more frequent basis.