The Westin Jakarta recently opened Henshin, an exciting multi-level food and beverage destination located on the hotel’s top three floors that aims to introduce Nikkei Cuisine to the foodies of capital. 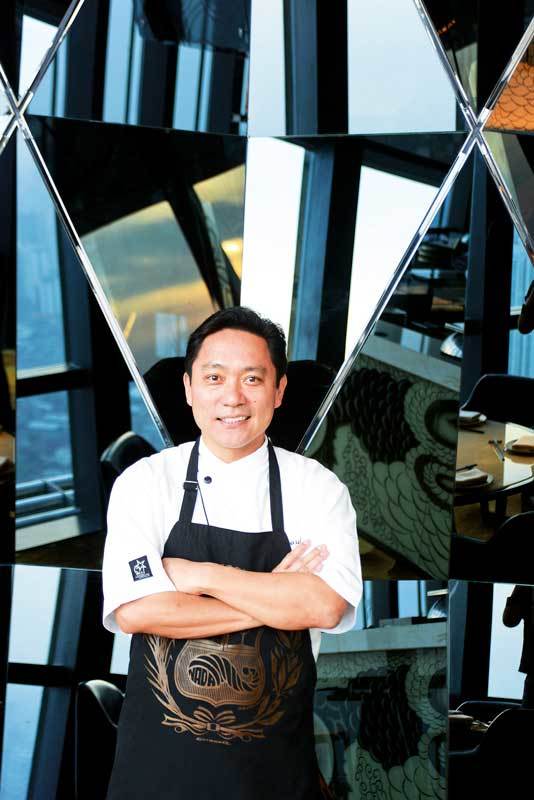 NikkeiCuisine is the much-talked about Japanese-Peruvian culinary sensation that has become increasingly popular across the globe in recent years. Henshin is helmed by Chef Hajime Kasuga, a third-generation Nikkei residing in Peru and long-time promoter of Nikkei cuisine.

After embarking on his culinary career more than 25 years ago, Hajime Kasuga is not only an experienced and skilled chef, but also a sought-after international adviser for restaurants specializing in Nikkei Cuisine. Despite his success, he remains extremely humble and has retained a charming sense of humor.

Chef Kusuga, who speaks Japanese, English and Spanish fluently, recently sat down with NOW! Jakarta for an exclusive interview to talk about his culinary journey that led him all the way to Indonesia.

When did you first become interested in cooking?
Actually I come from a family where nobody really liked cooking that much. Initially, I wanted to be a doctor but after three months of studying, I realized that it wasn’t for me. My mother then suggested that I attend a new hotel management school, and so gave it a try. There, at Le Cordon Bleu Peru, I learned pretty much everything that is needed for a career in the hotel industry: housekeeping, reception and also cooking. Although I found the cooking classes quite tough - we had to prepare lunch and dinner for 200 people at the same time - I really enjoyed them. I later started working in a Peruvian restaurant with a Japanese touch for one year. It was my first paid job, so it was a great experience for me. In 1995, I was also granted a scholarship by Miyagi Prefecture in Japan.

What did you learn during your time in Japan?
The most important thing about working in the hotel industry is to understand that the happiness of the guests always comes first. This was a good lesson for me. After my short stint in Japan, I came back to Peru where I worked in two different hotel restaurants, but I soon realized that I was looking for something more and moved to Matsuei Sushi Bar in Lima. The restaurant was founded by Nobu Matsuhisa, who is now one of the most famous chefs in the world. I stayed in this restaurant for four years before I was ready for the next step.

Where did this next step take you?
I still remained in Lima at a restaurant called Osaka - and that was basically the beginning of the fusion between Japanese and Peruvian cuisine. This concept of Nikkei Cuisine became very successful, and it is now very well known across Latin America and all the way to Dubai. I was soon called by a friend of mine who suggested to establish a new restaurant together. In 2005, we opened Hanzo, where we used traditional Japanese techniques but added a touch of Peruvian flavors. With Hanzo, we won the “Best Japanese Restaurant in Lima” award for two consecutive years - even though we didn’t serve traditional Japanese cuisine, but perhaps the people weren’t too familiar with the concept of Nikkei Cuisine yet. I didn’t mind, of course, after all, we won an award! We also participated in an international competition in Italy and won first prize. Now, there are many restaurants in Latin America and also in Europe serving Nikkei Cuisine. Later on, I opened another restaurant called Ache. Until today, I am still a consultant chef for the company.

You are now based in Jakarta. What is your impression of the city so far?
The first time I visited Jakarta last year in July to have a first meeting and tasting session here at the hotel. I guess they liked it. [laughs]

I fully moved here one month ago. When I came here together with my wife, and we met with Indonesians, she immediately liked their kindness and openness. If she wouldn’t have felt good about moving to Indonesia, I probably wouldn’t be here. I also feel comfortable here.

Could you tell us more about the menu here at Henshin?
To be honest, it was quite difficult for me to craft a menu, because I don’t really know the taste of Indonesian people yet. It is a bit of trial and error, but there are some good pointers: both Peruvians and Indonesians are passionate about food and enjoy spicy dishes. I may need to do some adjustments, and it will be a learning process for me as well. I usually let my staff taste all the dishes first. If they don’t like it, it won’t end up on the menu.

But of course, the menu at Henshin will include the most popular dishes of Nikkei Cuisine, like Ceviche. I also like to experiment with flavours, for instance combining the sweetness of Teriyaki sauce with blue cheese, and marinate tenderloin in coffee. As I said, this is only the beginning, and we will adjust the menu accordingly later on.

Do you follow a certain philosophy when running your kitchen?
When I was still working in Peru, I was sometimes treated quite badly by my managers, and I always thought, if I have my own restaurant someday, I will do things differently. I believe that you should treat your kitchen staff as equals, and that communication is key. I think you should treat everyone around you as you would like to be treated yourself - you don’t know what’s going to happen and you might need to reach out for their help tomorrow.

Did you already have the chance to explore the country and the food?
Yes, of course. Besides Jakarta, I have already visited Bali, and I have tried many of the local dishes. I truly like the spicy food that is available here, but I am still waiting for someone to teach me how to eat properly with my hands.