This year’s 493rd anniversary of the capital, NOW! Jakarta entices foodies to get to know popular traditional Betawi cuisine among the people of the city, yet its existence is increasingly rare. By all means, these are only a slice of what Jakarta has from more than 250 types of food that have been successfully invented by culinary experts. You might be interested to taste these four culinary heritages.

In your travels to every side of the city, your eyes are probably greeted by many carts of gado-gado (vegetable, tempeh and tofu salad with spicy peanut sauce), ketoprak (rice cake, glass noodle, tofu, bean sprouts served with peanut sauce and crackers), laksa (coconut milk soup contains rice cake, glass noodle, boiled eggs, basil leave and chives) or selendang mayang (colourful hunkwe flour served with coconut milk, pandan leaves and syrup) sellers shawl the carts and mothers who tidy up the kue cucur (brown sugar cake) on the table. Those are some Betawi special foods that still exist among the people of Jakarta.

For the Indonesian people soto is the most popular food and touches various groups. Soto Betawi is a coconut milk soup filled with beef and offals or other beef organs that have a unique savoury taste sensation. The name Soto Betawi was first popularized by Lie Boen Po, the first soto seller to use the term soto Betawi which was sold at Taman Hiburan Rakyat Lokasari or Prinsen Park. The word of soto itself is an absorption from Hokkian language, chau to (cooking beef innards). The use of curries and spices is characteristic of Indian culture. Other ingredients and seasonings, such as tomatoes, celery and potatoes including those processed into perkedel (potatoes cake) reflect the adoption from Europe culture. While fried onions as topping and crackers is the influence of Java culinary.

Most Jakarta people are easier to find Bubur Cianjur, Bubur Cirebon or Bubur Sukabumi than this bubur ase. Bubur or porridge is one of local favourites for breakfast. Not only in these areas of West Java, Betawi also has a traditional porridge which is bubur ase. The difference between ase and other porridge is that it is served with asinan or pickles and semur ayam (beef stews) which results in a unique blend of flavours. A bowl of bubur ase is a mixture of three cultures; Chinese, Middle Eastern and European. The foodstuffs developed by Chinese migrants found in bubur ase are bean sprouts, tofu, and soy sauce, while European influences are recorded in stews from the Dutch language, smoor. The use of soy sauce in stews is part of the Chinese influence while the spices in the concoction of the stew are an influence from the Middle East. Ase or ase sauce is a term in the Betawi language to refer to watery stews. This cuisine can still be found in several sellers in the Kwitang and Tanah Abang areas, in the colonial period these regions were included in the Weltevreden area or known as Betawi Tengah or Betawi Kota (downtown).

Kerak Telor or egg crust Is a snack for the Betawi people. Made from sticky rice, coconut, dried shrimp, pepper, salt, and eggs. The cooking method is unique, cooked on coals on a traditional stove (anglo) by turning the pan over when the kerak telor is in a half-cooked state. This food has been around since the Dutch colonial era and was liked. This food was created accidentally or by trial and error from a group of Betawi people living in Menteng. At that time Jakarta was abundant with coconut trees which almost filled most of its territory and eggs were the result of livestock that were easily sought after. Around 1970 the Betawi people began selling these foods in the Monas area.

For Betawi people, it is a kind of wine or beer without alcohol. In the past, Betawi people often saw the Dutch drinking wine at parties and they also wanted to be able to drink without fear of being illicit, then they made the imitation version. According to historian JJ Rizal, this drink must be present at Betawi people’s parties. Distinctive sweet, spicy, and warm taste makes this drink popular with betawi people and foreign tourists. The ingredients consist of 11 kinds of spices. The name ‘pletok’, is taken from the sound that comes out when the wine bottle cap is usually opened. 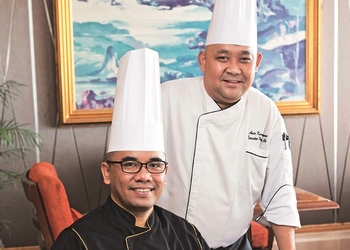 Getting to Know the Dynamic Duo: Chef Otong Arif and Chef Anis Kurniawan