The Starbucks Barista Championship, previously known as Coffee Ambassador Cup, is a prestigious annual competition that has been held since Starbucks entered the Indonesian market in 2002 and encourages Starbucks baristas across Indonesia to participate and show off their skills. At the same time, it is the gateway to compete for the coveted title of becoming Starbucks’ best barista worldwide. 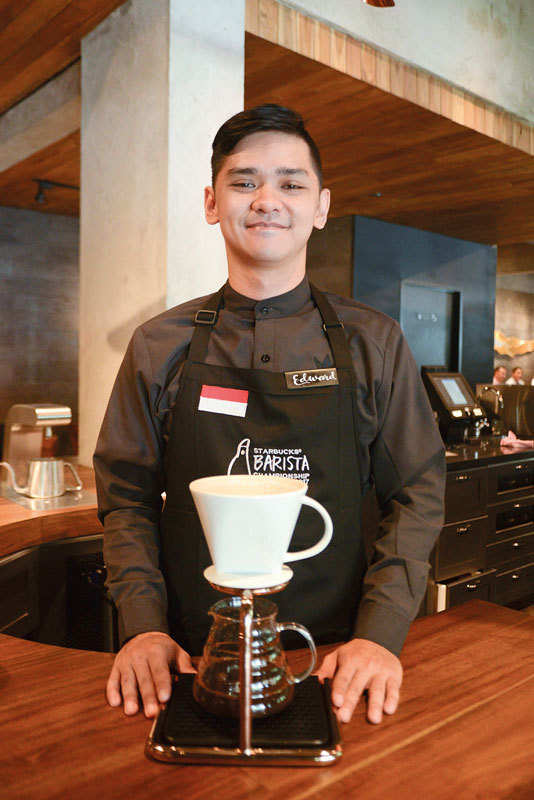 The finals of the 11th Starbucks Barista Championship was held on 18 October: this year’s winner Edward Reza Firmansyah, a 22-year-old barista from Starbucks Reserve Store Pakubuwono, has been working with the company for two years.

When speaking about the competition and the prospect about moving to the next level on his path to barista glory, Edward can’t help but smile. One of nine finalists, Edward won over the jury in four different categories, namely coffee knowledge, technical competency, communication skills and beverage creativity. He mastered the challenging tasks by creating three presentations for each category: manual brewing, latte art and signature beverage. For the latter, Edward crafted “Malic Attack”, a blend of East Timor coffee with kiwi and apple juice with perfect taste and balance.

“To be a Starbucks barista is a good opportunity for me to deepen my knowledge about coffee,” he said. “I am really glad to have won the barista championship this year, which has enriched my experience even further.”

Edward added that he needed three months of preparation prior to the competition. He learned a lot from observing previous winners and his fellow Starbucks baristas that motivated by giving him fresh ideas.

Edward enjoys his job as barista because it allows him to both learn more about coffee and also lets him meet new people everyday and expand his network. Being a barista, he said, is more than just preparing a cup of coffee - it is equally important to establish a good relationship with his customers.

Following his victory, Edward will represent Indonesia at the Starbucks Asia Pacific Region Barista Championship next year. He aims to finish among the big three in the competition by presenting Indonesia’s unique culture as a theme. Currently, he focuses on perfecting his public speaking skills and coffee presentation.

Through this competition, Starbucks aims to ensure that their customers have a “3rd Place Starbucks experience” on every visit, which means that after their own home and their office, they regard the coffeehouse chain as their favourite place to be.

Starbucks Indonesia’s initiative also supports President Jokowi’s statement who recently said when asked about the growing coffee house industry that “becoming a barista is very important, and at the same time, extra training is essential.”

Starbucks has certainly become an important part of this journey and helped to raise the bar to reach an international level of professional standards.