Sommelier Ikhsan Tahdinal Talks About The Art Of Wine

A sommelier is more than just a wine waiter in a restaurant. Their role encompasses many different aspects: in addition to an extensive knowledge of wine, they should also have a passion for food. They have to understand their customers’ needs and should be welcoming and easy to talk to. 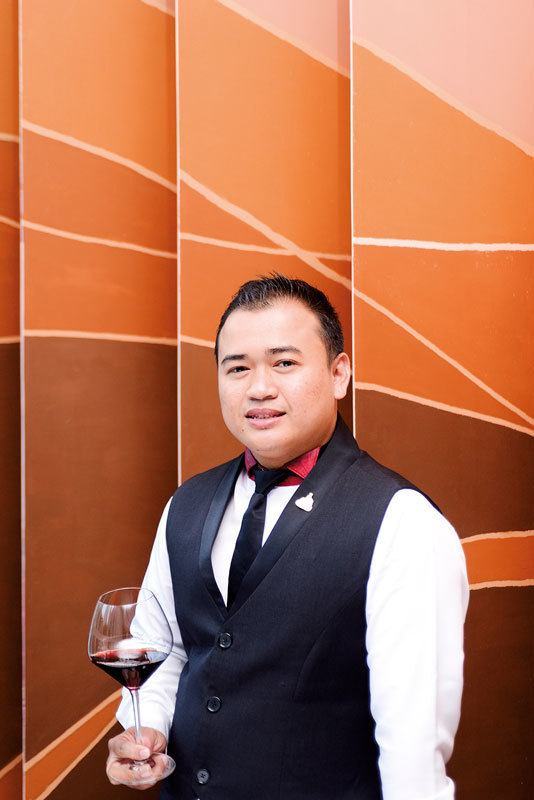 Iksan Tahdinal from AMUZ Gourmet, one of the most popular French restaurants in the city, embodies all these things and more - he recently won the competition for Best Indonesian Sommelier 2017, which took place at Mandarin Oriental hotel as part of the Jakarta Fashion and Food Festival. He will represent Indonesia at the Asia Best Sommelier Final in Taiwan in December.

NOW! Jakarta recently sat down with the friendly sommelier to talk about his latest accomplishments and Indonesians’ growing interest in wine.

First of all, congratulations on winning the title of Best Indonesian Sommelier. When did you first become interested in becoming a sommelier?
I used to work as a bartender in clubs and restaurants for 10 years, but when I moved to AMUZ in 2013, it was the first time that I worked in a fine dining restaurant. It was quite new to me, and I was astonished by the sheer amount of wine on offer here. That’s when I started to become interested in wine. AMUZ’s former sommelier encouraged me to learn more about wine by researching on the Internet and reading books. He also shared a lot of insights with me.

I actually participated in the sommelier competitions every year since 2014, but was never lucky enough to win it. Therefore, I am very happy that my patience has paid off.

Could you tell us more about the competition? What exactly do you have to do?
I feel that each year, the competition gets more difficult. First, you have to take a written test, while the next round is all about service - opening champagne bottles, giving recommendations about wine, explaining about wine and food pairing. Finally, in the last round, the judges ask specific questions about different wine brands - their origins, taste, grapes - before recreating a typical restaurant scene with maybe four or five people sitting at one table, and the sommelier has to interact with them, give recommendations on wine and food. Sometimes, the judges try to distract you with questions that actually have nothing to do with your job as a sommelier, just to make things a little bit more difficult, and to see if you can keep your focus.

On the day of the competition, my daughter was in the hospital and I already wanted to cancel it, but my wife told me to go ahead - so I thought, the least I can do is to make it count, and that’s what I did. And my daughter has fully recovered, too.

As the winner of the competition, you will represent Indonesia at the Asia Best Sommelier Final, which will take place in Taiwan in September. Are you doing any special preparations?
Of course, I have to be well prepared, so I am trying to improve my skills continuously and take them to the next level. I always strive to be better, not only for myself, but also for my company as well as for my country. While the concept of the competition will be the same as the one here in Indonesia, I believe that the questions will be more difficult, so I have a lot to memorize. It will not exclusively be about wine either, because as a sommelier, I have to know about other beverages as well, like beer and sake, sometimes even coffee and tea.

What is the most challenging part about being a sommelier?
To keep the customers happy. As a sommelier, the guests trust your opinion on wine and will follow your recommendations. Therefore, it is very important to know the taste of the wine before you open the bottle. If the guests don’t like the wine you recommended, both sides will be disappointed. Recommending wine should never be about the price, but about the preferences of your guests.

Compared to other countries, Indonesia doesn’t have a strong wine culture. But do you see this changing? Do you think that people here have become more interested in wine recently?
Yes, I think that it has changed a lot over the past years, especially in Jakarta, which is also evident in the emergence of a couple of wine clubs. More and more restaurants are also beginning to employ sommeliers, as their customers show a growing interest in wine.

What is your favorite wine?
I like the New World wines - wines that are produced outside of the traditional wine-growing areas of Europe and the Middle East, particularly from the United States, Australia and Chile. I think New World wines have a strong character. The classic wineries from Europe, for example, follow very strict rules whereas New World wines are more adventurous and surprisingly new in flavor. But I don’t want to diminish the classic wines either - Bordeaux wines, for instance, taste exceptionally good as well.

Did you ever have the chance to visit a winery abroad?
In 2016, AMUZ sent me to Bordeaux in France for one week to visit some vineyards where I learned so much about the winemaking process. It was fascinating to witness the process firsthand, and the wine tasting sessions - which started in the morning and lasted until evening - were nice as well! [laughs]