The Night Study Group meets one Wednesday evening each month at the IHS Library to enjoy a presentation relating to Indonesia’s heritage, from an IHS friend or an external speaker. In February, an expectant crowd gathered for a talk and sampling by Santhi Serad from ACMI (Aku Cinta Makanan Indonesia - I Love Indonesian Food) entitled The Flavors of the Spice Islands. It was an honour for us to host her and we were looking forward to sampling her dishes and learning about the herbs and spices that go into them.

As an Indonesian Culinary Expert, Santhi has always been passionate about Indonesian food and this motivated her to create ACMI in September 2012. She wanted to educate people on the food and spices of Indonesia. A year ago, with the guidance of her culinary mentor, William Wongso, Santhi opened the Ramurasa Cooking Studio and Coffee Shop in Kemang, dedicated to teaching and serving great quality traditional food. 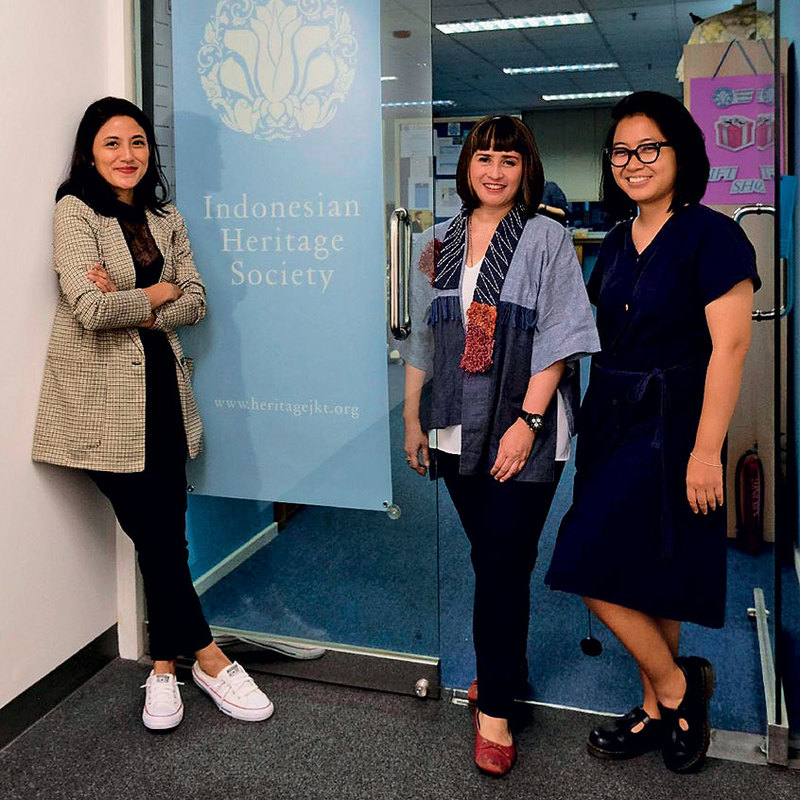 She and her highly professional team now run classes in the kitchen and serve the dishes in the adjoining restaurant. She also travels the world to share her knowledge about Indonesian food and spices.

Claiming 3,257 culinary items for this country, Santhi explained that the cuisines of western Indonesia are more complex than those of the east. Then she took us on a culinary journey from Sabang to Merauke, describing two or three iconic dishes from each area and passing round examples of the flavours that go into making them.

Indonesia uses about 135 different herbs and spices of which the most (128) are used in Sumatra and the least (fewer than 60) in the areas of NTB-NTT-Papua-Maluku, which is ironic since the most famous Indonesian spices are nutmeg and cloves which are endemic to Maluku but not in fact used so much in their own cooking. 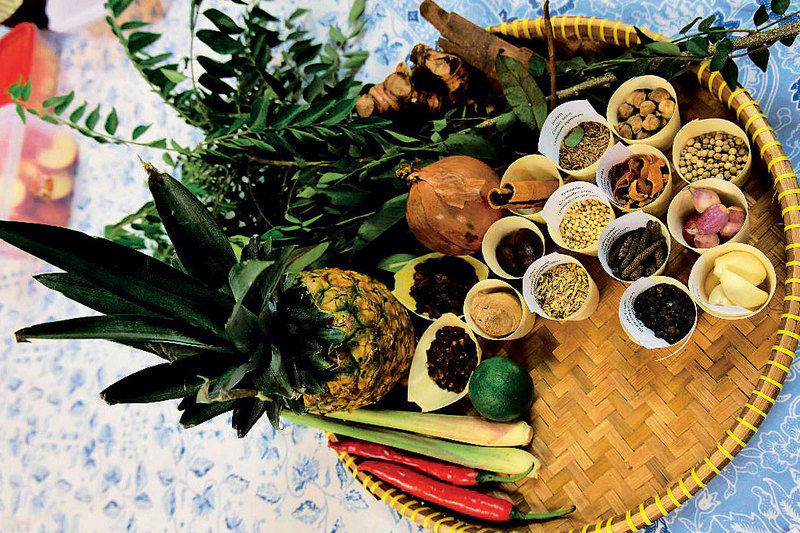 Santhi described what makes a meal complete: “If the French pair a meal with wine, a dish in Indonesia goes with a certain sambal and kerupuk to make it complete.”

Across Indonesia, the starch is provided by a wide variety of plants, rice being the main one in the form of steamed, fried, porridge, lontong or ketupat, but the root crops yam, cassava and potato and the product of the sago tree are widely eaten. 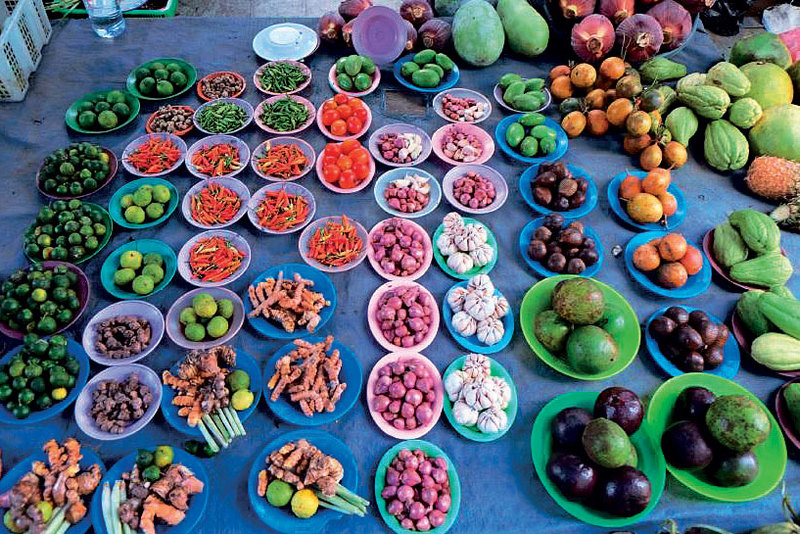 In her slides, we were able to see the various foods eaten with the spices. To name a few examples of special products and their original regions; Gorontalo: white corn which is more starchy than yellow corn, East Java: Black Rawon Kluwek (Pangium edule) soup, West Java: Karedok - raw vegetables served with peanut sauce, and South Sulawesi: Klappertaart-Manadonese coconut tart, taken from the Dutch.

We were delighted to taste the Nasi Minyak Batanghari with pacri nanas and black roasted meat, a specialty of Jambi, and two delicious drinks, one with red ginger and lemon grass and one with kunyit asam (turmeric and tamarind). We sampled cinnamon from Sumatra including the milder type called mesoyi which is claimed to be the best.

It was interesting to know that there are several different types of chillies; from Toraja - katokkon, from Dieng - cabai gendot (known in Wonosobo as jateng) and the Sumbanese chili padi. 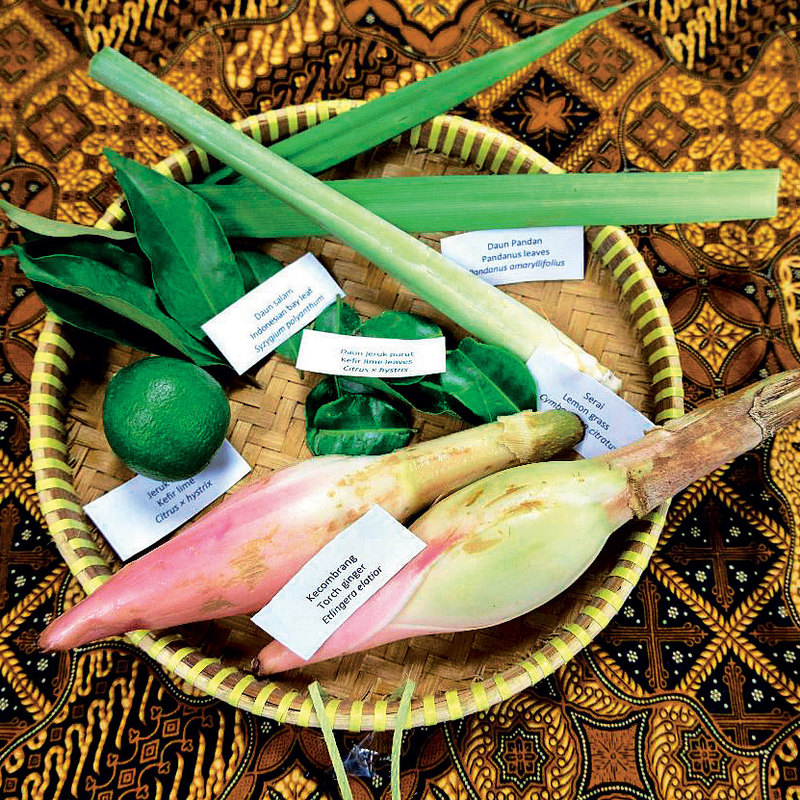 A special mention has to be made about Indonesian curry flavours. We saw this wonderful array of possible ingredients. Of course, curry originated from India and migrated here with the people and was assimilated with the culinary culture in each local area so that within each region there is a great variety in the numbers of spices included in cooking curry. Even within northern Sumatra the number of spices regularly used varies among the regions.

William Wongso’s presence made the talk more insightful as he also added and shared his knowledge with us. We had a short dialogue after the talk where one of our audiences asked a question about the younger generations who seem to be more interested in cheese and chocolate than traditional food. Santhi answered by saying the only way to attract the younger generation to appreciate local traditional cuisine is by cooking for them at home. That is how they will also learn more about their cultures.

Before closing, Santhi reviewed her talk by putting a number of questions to the audience and giving away 3 aprons for the best replies. This made a fun ending to an enlightening and enjoyable evening. Overall it was a delightful experience of eating and drinking while learning from a knowledgeable and dedicated team. Thank you Santhi Serad, Milchatul Akmalia and Astrid Enricka for the smooth cooperation in making the talk a success.