Celebrating its grand opening in mid March, European-Asian restaurant Baxter Smith is ready to serve up an array of fusion food in a casual dining atmosphere, which is dominated by the steampunk interior of 19th century industrial London. 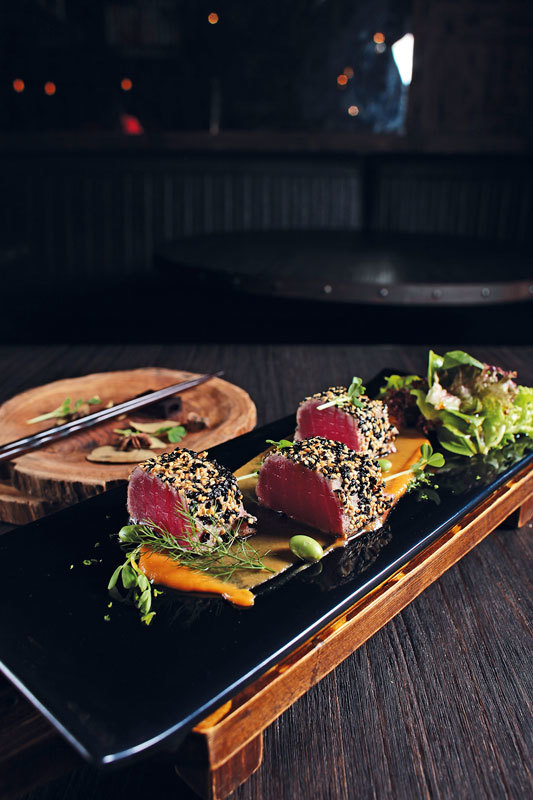 Strategically located in South Jakarta’s Senopati, an area known for an abundance of cafés and bistros, Baxter Smith offers dynamic flavours of West-meets-East that include French, English, Italian, Chinese, Indonesian, Thai, and more. At the grand opening, Chef Sigit Untoro unveiled his new creations, the result of his relentless effort to explore spices and ingredients. Baxter Smith’s creative mixologist Doni Irianto Purba introduced new concoctions - both with and without alcohol - to the city’s foodies.

Among our favourite dishes was Tuna Tataki, seared tuna served on top of a gingery carrot puree with fresh salad splashed with ginger ponzu dressing, as well as the unique Linguine Prawn Bloody Mary Sauce, which was inspired by the famous drink Bloody Mary, topped off with savoury grilled prawns. Duck lovers will enjoy the Slow Roast Duck Breast - a super thick slice of duck breast with garlic spinach and duck jus.

The Pan Seared Barramundi, served with sweet purple potato puree alongside spinach and shimeji mushrooms with lemongrass emulsion, promises juicy freshness. Dessert lovers should give the smooth and creamy Mango Pannacotta a try.

As for the beverages, the Roojak mocktail provides a hot spicy kick through its blend of pineapple, lemon and orange juice mixed with chili syrup and blackpepper. Meanwhile, Baxter Ice Tea—black tea mixed with blueberry jam, strawberry, lemon, lime, and mint leaves—offers a fresh and sour sensation.

“Baxter Smith opens up its doors for Jakartans with the concept of a one-stop-venue in which everyone can enjoy high-quality yet affordable food and drinks while relaxing in our entertainment venue after working all day. We are also open for events as we have more than just one [dining] area,” Baxter Smith Operations Manager Mahfuz Agil said.

Named after the famous blacksmith from London, Baxter Smith - whose logo is an English bulldog wearing a tall hat and a monocle on its right eye - conveys a sense of masculinity and toughness. By the time you enter the dining area, you’ll be greeted by black leather couches and plenty of metal pipes and rotaries representing steampunk.

The lounge is modeled after the 19th century Zeppelin rigid airship complete with the distinctive windows and a balloon shaped like the airship itself hanging on the ceiling. The third level houses a rooftop bar with an outdoor area and a stunning view of Jakarta’s skyline.

According to Agil, the different spaces at Baxter Smith can be rented for corporate meetings, product launching and other events - proving that this new venue is more than just a place offering good food and drinks.