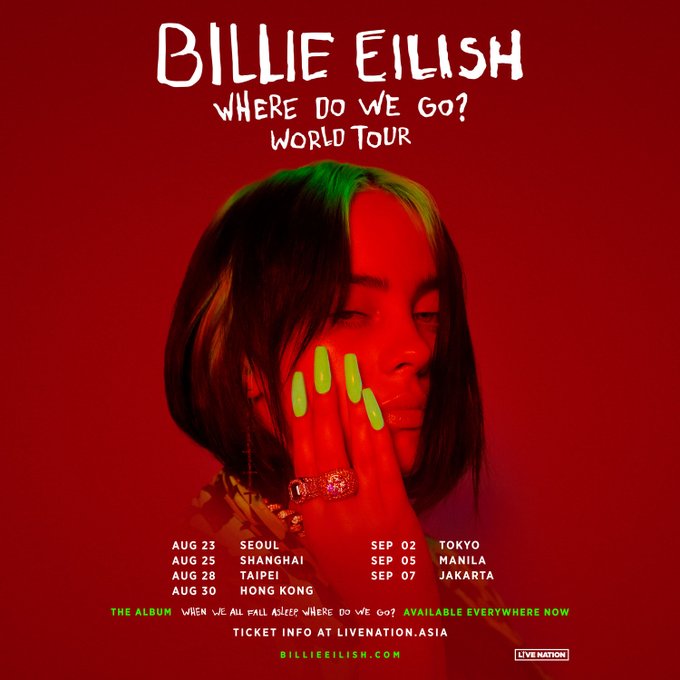 Billie Eilish - Where Do We Go? World Tour Live in Jakarta

Billie Eilish is officially the first artist born this millennium to achieve both a No. 1 album and single, and is now the third female solo artist in the 31-year history with multiple songs topping the Billboard Alternative Songs airplay chart (alongside Alanis Morrissette and Sinead O’Connor). "bad guy” also hit #1 in the Pop Songs airplay chart after leading the Alternative Songs airplay. Her album, WHEN WE ALL FALL ASLEEP, WHERE DO WE GO? -- released on March 29 -- debuted at No.1 on the Billboard 200 album chart, has since returned to the top spot two additional times last year, and is currently 2019’s best-selling album in North America. Recently, Billie Eilish graced the cover of Rolling Stone, V, Billboard, Variety and ELLE, and has amassed more that 17-billion combined global streams to date.

Billie Eilish will embark on a sold-out North American tour in March 2020 and will tour South America and the UK before heading to Asia. Jakarta, among other big cities in Asia, will be part of her tour, scheduled on 7 September 2020 at Indonesia Convention Exhibition (ICE) BSD.