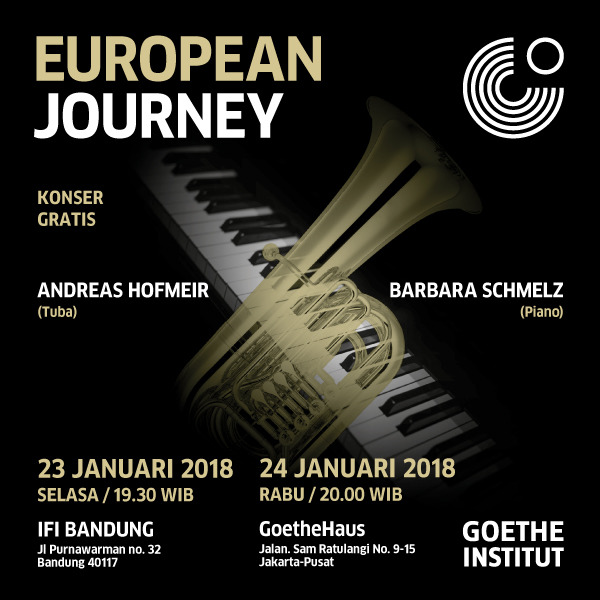 As part of the performance series Anders Hören, or Listening Differently, the Goethe-Institut Indonesien is proudly present the first music program in 2018, a classical concert in total darkness as it plays host to renowned German musicians Andreas Martin Hofmeir (tuba) and Barbara Schmelz (piano).

A professor at the Universität Mozarteum Salzburg (University of Music and the Performing Arts Mozarteum Salzburg), Andreas Martin Hofmeir founded the popular Bavarian band LaBrassBanda and is a multiple award-winning cabaret performer. He is a sought-after soloist and chamber musician and has given master classes all over the world. In 2004 he won the prestigious “Città di Porcia” International Tuba Competition and until 2008 was solo tubist with the Bruckner-Orchester Linz under Dennis Russell Davies.

Organist Barbara Schmelz is a renowned product of the Universität Mozarteum Salzburg and the Royal Academy of Music in Copenhagen. She heads the established concert series Musiktage Waging and is currently working as regional cantor in the church music department of the Diocese of Passau. Her broad musical spectrum ranges from concert ante and liturgical organ playing to singing, choir and ensemble conducting to improvisation, whereby the connection of music and liturgy plays an emphasized role.