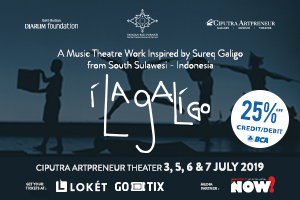 I La Galigo, a colossal performance inspired by Indonesia's cultural richness, for the first time will be presented at Ciputra Artpreneur, Jakarta. Prepare to be captivated by a world-class spectacle of music, drama and colour when ‘I La Galigo’ bursts onto thestage at the Ciputra Artpreneur Theater. Having played in 9 countries and 12 world cities since its debut in Singapore in 2004, the latest edition in Jakarta directed by the internationally renowned Robert Wilson involves more than 50 performers from across Indonesia. Presented by Ciputra Artpreneur in collaboration with Yayasan Bali Purnati and Bakti Budaya Djarum Foundation, the production is based on ‘Sureq Galigo’, an Indonesian epic from the Bugis people of South Sulawesi. The ancient poem tells of the origin of humanity, through stories of travel, war, forbidden love, marriage and betrayal. Get your tickets at ciputraartpreneur.com, Loket, or Go-Tix. Ticket starts from Rp 475.000. Get 25% special discount by using BCA Card. For BCA Credit Card, discount applies at Loket.com. For BCA Debit Card, discount available directly from Ciputra Artpreneur through WhatsApp: 0819 0538 5251.