Regularly held since its inaugural event in 2015, Indonesia Comic Con is a place where people can explore their hobby, especially those in love with comic, games and toys.

In Indonesia Comic Con 2019, Debora Ann Woll and Austin St. John will be the Official Guest Stars. Debora is known for her role in Marvel’s Daredevil as Karen Page while Austin once played the leader of Power Ranger as Jason Lee Scott a.k.a the Red Ranger in Mighty Morphin Power Rangers.

Other than the Official Guest Stars, the event will also entertain the visitors with cosplay and live DJ performance. Also, don’t miss many interesting exhibitions from various tenants.

Indonesia Comic Con 2019 will be held at Jakarta Convention Center (JCC) on 12-13 October. Purchase your ticket via Shopee and visit www.indonesiacomiccon.com for more information. 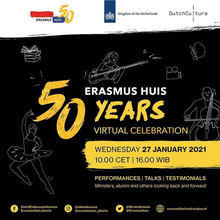