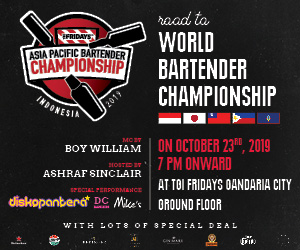 Other than the bartending competition, the event will also see entertainment presented by Mike’s Apartment, Disko Pantera and DC Dancers with Bunga Citra Lestar and Ashraf Sinclair as hosts and Boy William as MC.

Come and be the witness of the 2019 Asia Pacific Bartender Championships as the participants push themselves and create their best beverages to then compete in the world stage. The event will be held at TGI Fridays Gandaria City Mall, South Jakarta on 23 October 2019 starting from 7pm.