Dermaster, the number one Korean beauty clinic in Asia with branches in Malaysia, Vietnam, the Philippines, Hong Kong, Taiwan, Thailand and Indonesia, recently launched two new treatments – Aptos Thread and Plasma Laser – to promote long-lasting beauty and a natural young look. In Indonesia, the treatments are available at Dermaster’s branches in Jakarta, Surabaya and Makassar.

Aptos Thread is a breakthrough innovation from Russia, which is made of qualified polypropylene to improve soft tissue contours, slow down the aging processes, and preserve beauty without surgical intervention, scars or hems. It allows a tighter pull and lift on the facial area, the arms, stomach and many other body parts that tend to become flabby as people get older. Meanwhile, Plasma Laser relies on a special device to create deeper ends on the eyelids and to uplift the eyes without any surgical procedures. “We are very proud to be the first beauty clinic here in Indonesia that provides the two treatments for our customers. We already introduced Plasma Laser in July while Aptos followed in September. They both cause very minimum side effects too, so it’s very safe,” one of the in-house doctors, dr. Oktaviana said during an interview with NOW! Jakarta at Dermaster’s branch in Kelapa Gading. According to dr. Oktaviana, the patient’s body or facial area where the Aptos Thread is inserted will become a little swollen – not severely – for about a week. In addition, the patients are not allowed to engage in physically demanding activities and must try to avoid facial expressions that put tension on the face (e.g. laughing hard), in order to ensure that the thread lifts the targeted area properly.

“When it comes to Plasma Laser, the patients’ facial skin will exfoliate a bit for a while. And because the treatment uses a special pen-like device, it will leave some very tiny dots on the surface of the skin which are barely visible though,” she continued. The first improvements of the Aptos Thread can be seen right after the treatment, while the maximum results will be visible after two or three weeks at the latest and will stay for about one year. Patients are required to have a retouch or touch-up on a regular basis (the frequency depends on the patients’ condition) to maintain the desired results. The doctors will also give them some medication to support the process. Since the procedure of Plasma Laser is much simpler, the patients only need to see the doctor again once a month during the first three months after the initial treatment. Just like the Aptos Thread, the results of Plasma Laser show almost immediately and will last for two or three years.

“Given all those qualities, we hope that we can be the number one beauty clinic for facial and body treatments in Indonesia and we also hope that more people will find out about Dermaster. It will be nice as well to gradually open more branches across the country,” dr. Oktaviana said. Dermaster was first established in 2002 by dr. Kwon Han Jin in Seoul. In Jakarta, the clients are both male and female betweeen 17 and 60 years old and also include Indonesian celebrities such as Ivan Gunawan, Iis Dahlia and Irfan Hakim. dermaster-indonesia.com/main/index/en 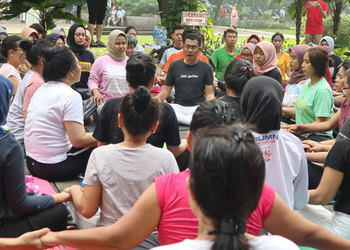