The Universal Language of Football

The International Champions Cup, which was recently held in Singapore for the first time, not only brought football giants FC Bayern Munich, Chelsea FC and Inter Milan to the region to compete in the pre-season tournament, but also saw a large number of football fans traveling to the Lion City to cheer for their favorite teams. 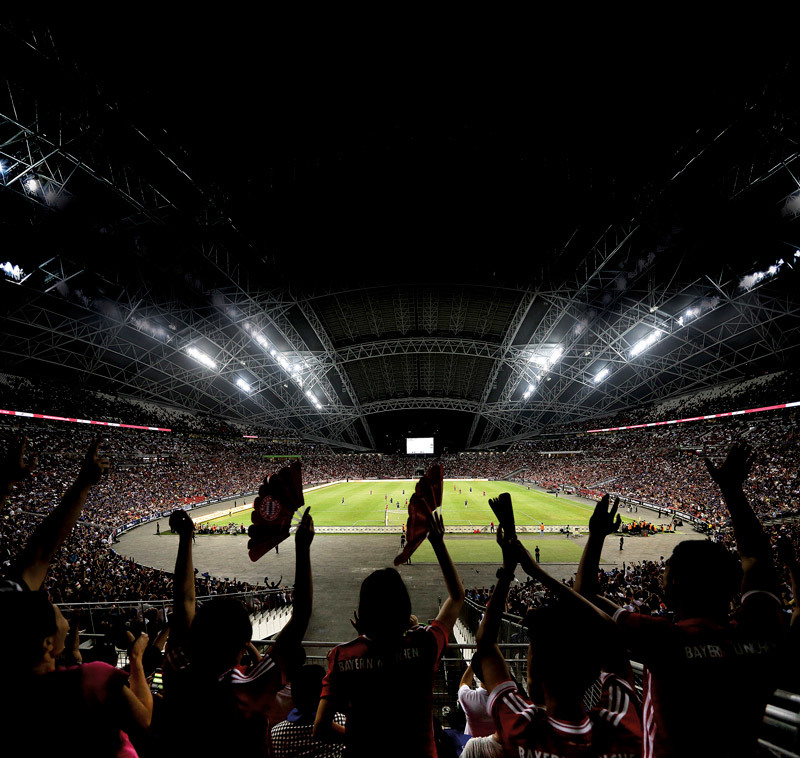 When she was still a kid, Devira Emilia didn’t have a lot of toys or dolls, so she resorted to playing football in the garage with her cousins - the only girl among a bunch of boys.

Her passion for football began to grow, even though it wasn’t always easy being a girl in a predominantly male sport. But this was never a reason to stop her from playing, and like any other football fan, Devira enthusiastically watched the World Cup in 2002. It was then that she first saw German goalkeeper Oliver Kahn - and in that moment, Devira found her team.

“I simply adored the way he was leading the German national team and yelling at them,” the 25-year-old said, laughing. “I learned that he was playing for Bayern Munich and started to follow that team - and along came another idol, [German striker] Miroslav Klose.”

In 2008, Bayern Munich came to Jakarta for the first time to play against Indonesia’s national football team, and in late July this year, they took part in the International Champions Cup (ICC) in Singapore. 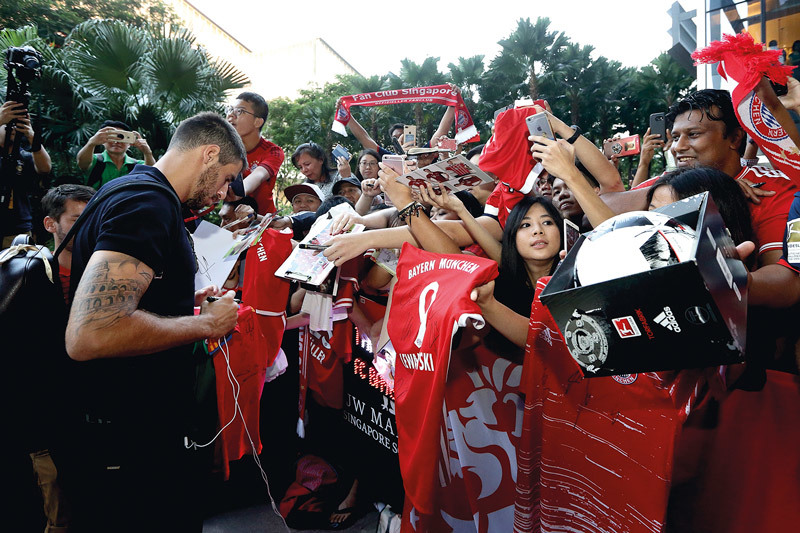 The 2017 ICC - the fifth installment of the tournament - featured many of Europe’s top flight teams and was held at different venues from America to Asia. It was the first time for Singapore to join ICC as host country.

“I was so excited when I found out that FC Bayern will come to Singapore,” Devira recalled. “I’ve seen them before in Jakarta in 2008 but the squad has changed a lot and I really wanted to see them again.”

The official Bayern Munich fan club in Indonesia, FCBFI, organized a trip for its members to Singapore, with a programme designed to enjoy every minute of their favorite team’s visit.

FCBFI was established in 2008 and has currently around 500 active members across Indonesia, however, according to the fan club’s president, Kukuh Rahardi, it reaches thousands of football lovers through its social media channels. 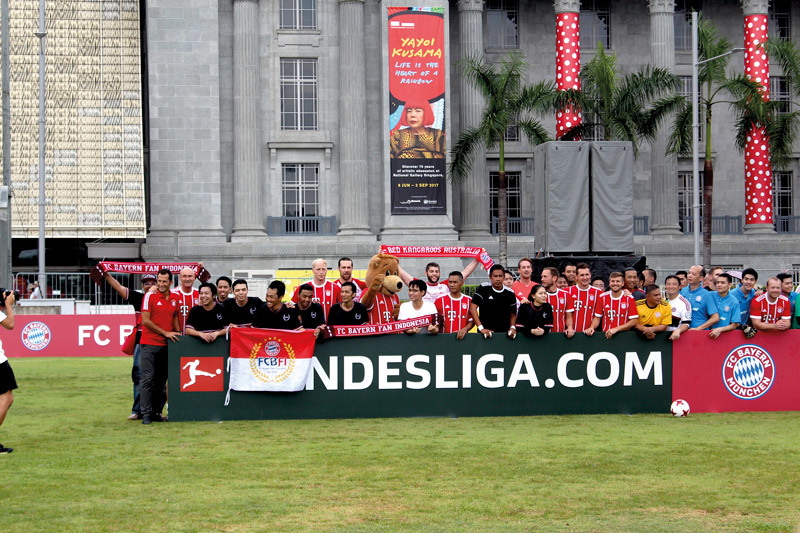 “There are so many Bayern Munich fans in Indonesia, but it is impossible for us to reach them all due to the country’s vast territory,” explained Kukuh, who has been a fan of Bayern Munich since he was 14 years old and now religiously watches every game.

The activities of FCBFI in Singapore included watching the team’s two games at the National Stadium and participating in the FCB fan club tournament.

“We received an invitation from the FC Bayern Board to come to Singapore to watch Bayern vs. Chelsea and Bayern vs. Inter Milan, sitting in the Bayern block with fans from all over Southeast Asia, Australia, Hong Kong and even from Germany,” Kukuh said.

“In addition, they also organized a fan club tournament where all the fan clubs gathered and played against each other and a selection of Bayern legends like Miroslav Klose, Giovane Elber, Hasan Salihamidzic and Raimond Aumann. Even FC Bayern president Uli Hoeneß made an appearance.” 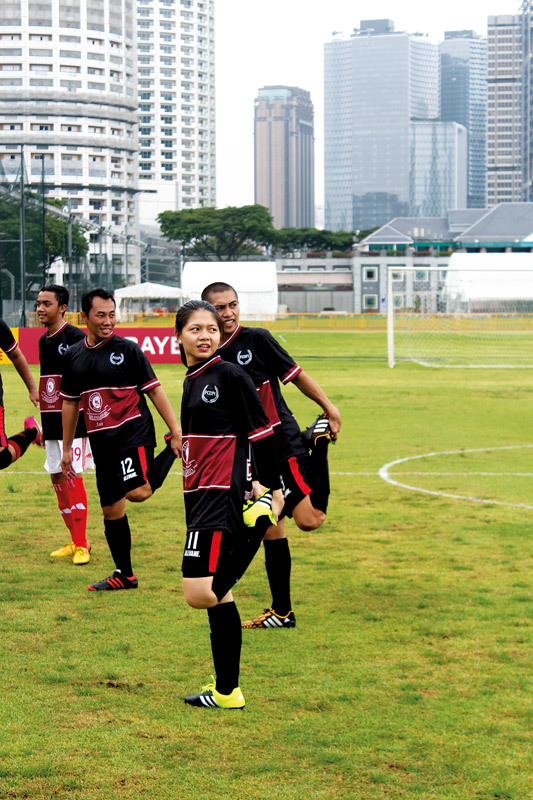 Devira was part of the FCBFI team that played against the Bayern legends - and had the chance to go head-to-head with her idol Miroslav Klose. Even though the Indonesian team lost, it was an experience she wouldn’t have missed for the world.

“I’ve been his fan for so many years, but all I could do before was collecting his photos, looking at them and dreaming about playing with him someday,” she said, still in disbelief. “Now it’s not a dream anymore!”

The fan club members also had the opportunity to be up, close and personal with the current squad of Bayern Munich, which includes stars like Thomas Mueller, Mats Hummels, Franck Ribery and Javi Martinez: together with other fans, they were ready to greet the team at the airport and the hotel. The fan clubs were also able to watch Bayern’s training session at the National Stadium, where some of the players walked over to the fan block afterwards for autographs and quick photo sessions.

FC Bayern Chairman Karl-Heinz Rummenigge, a former Bayern player himself, said during a press conference in Singapore that the management is well aware of the fact that the club has a huge fan base in Indonesia. 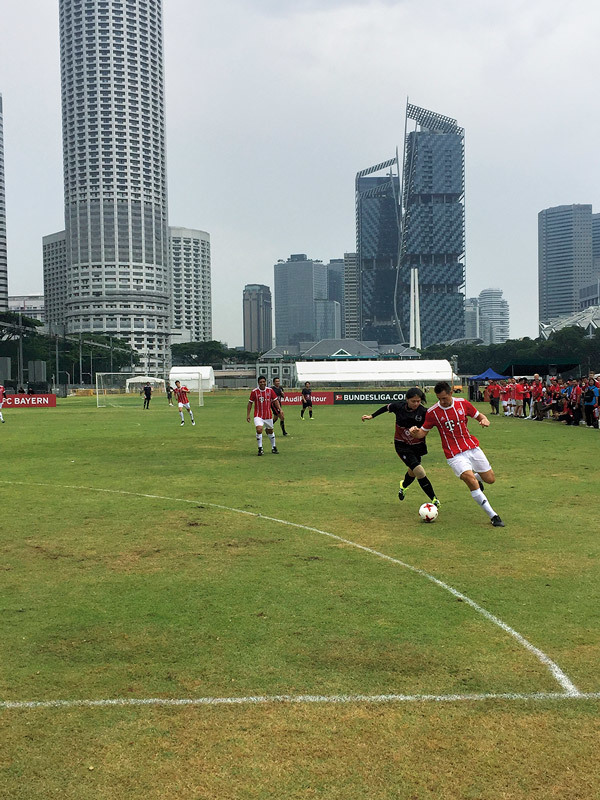 “If I’m not mistaken, the largest FC Bayern fan club outside of Germany is based in Indonesia,” he said. “We are planning to come back to Indonesia in the future for another game. I can’t tell you yet when exactly, but we do know that our Indonesian fans are waiting for us, and we would like to visit them again soon.”

During the ICC itself, the Bavarians won their first game 3-2 against Chelsea, but suffered a 0-2 defeat against Inter Milan. But even a patchy performance on the pitch couldn’t dampen the enthusiasm of the fans. They kept waving the flags, singing, chanting (using the German language, mind you!) and spurring on their team. In the end, it was a once-in-a-lifetime experience.

“It was a memorable trip, and it was great to see that FC Bayern put in an effort to get closer to their fans in Southeast Asia,” Kukuh said, adding jokingly that he was suffering from withdrawal symptoms now that the team had returned to Germany.

“I also enjoyed to get to know fans from other countries,” he continued. “Some of them I had already met on Facebook, but I truly enjoyed meeting them in person.”