Satellite cities are vital for the continued sustainability of a city the size of Jakarta, and these cities are doing their part. 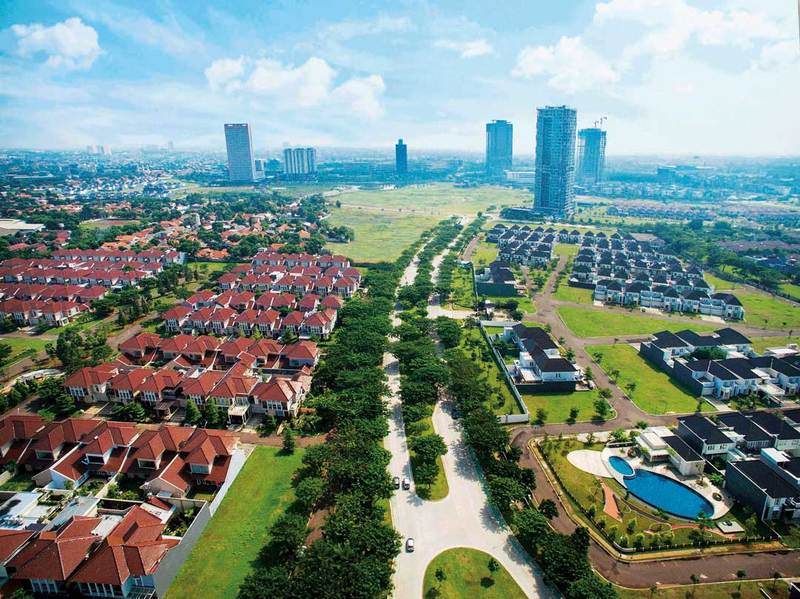 In an era where suburban sprawl looms large, satellite cities could be viewed as a solution to the problem. In many cases, satellite towns are part of larger metropolitan areas, but still exist independently of the larger urban core. With suburban sprawl, the suburban areas and bedroom communities are less self-contained. Though not part of the city proper, they still fall within one commuter shed. Urban areas could exist with multiple nodes. Satellite cities can maintain self-contained economies and services, while still being interconnected with larger cities nearby. With better urban planning, satellite towns could play a role in reducing suburban sprawl. Regional planning would need to take place with satellite towns in mind.

With over 10 million inhabitants and a population density of 14,464 per sq. m., it is only natural for the modern megalopolis of Jakarta to have more than one of these satellite cities in orbit to support its continuity. Among the many developers in Greater Jakarta area striving to establish an independent satellite city of their own, some deserve special mentions, especially considering their sustainability efforts. Let us take a moment and have a look at BSD, PIK, and Alam Sutera for a moment and discuss some of these sustainability efforts—how they are done and how successful they are. 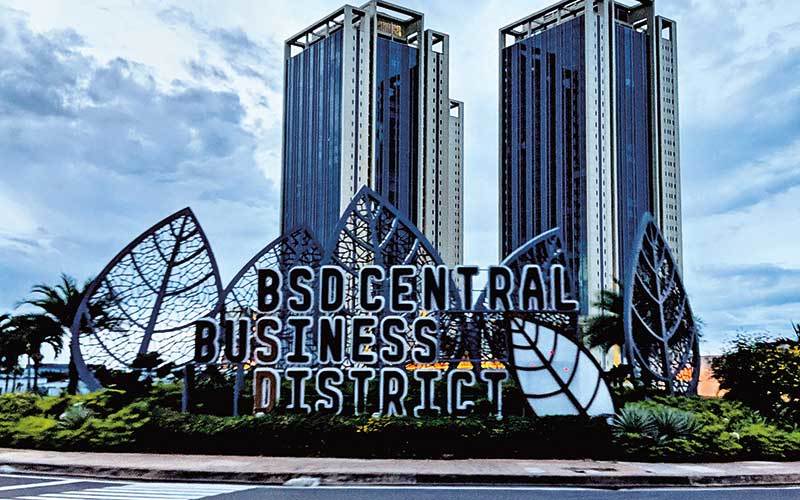 Bearing the slogan of “Big City. Big Opportunity”, BSD City is one of the oldest, most successful planned cities located at South Tangerang to the west outside of Jakarta. BSD was officially opened in 1984 with developments in industrial, commerce, business, education, tourism, and residential sectors. BSD City had a population of 100,000 by 2005.

For BSD City developer Sinarmas Land, sustainability has always been an integral part of their strategic business. The property develop mogul has adopted community acceptance and support as key foundations for sustainable growth.

BSD Green Office Park is one of Sinarmas Land’s sustainability commitment in which they dedicate 20 hectares worth of land to be developed into an integrated office and commercial area that complies with international green standards. This environmentally-friendly area was designed to reduce the number of population in Tangerang who commute to Jakarta to earn their living by providing a place to work right within BSD City, preven land erosion, enhance rainwater absorption, and reduce air pollution.

Sinarmas Land started the annual BSD City Green Festival in 2004, and it has since become an important event in protecting and conserving the environment among the local community. The green festival is often held together with environmental campaigns from Banten Province Government, Tangerang Regency Government, and South Tangerang City Government. Tree-planting is one of the activities that the green festival takes very seriously. To date, the company has planted over 3 million trees in commercial, pedestrian areas, road mediants, neighbourhood parks, and other locations. 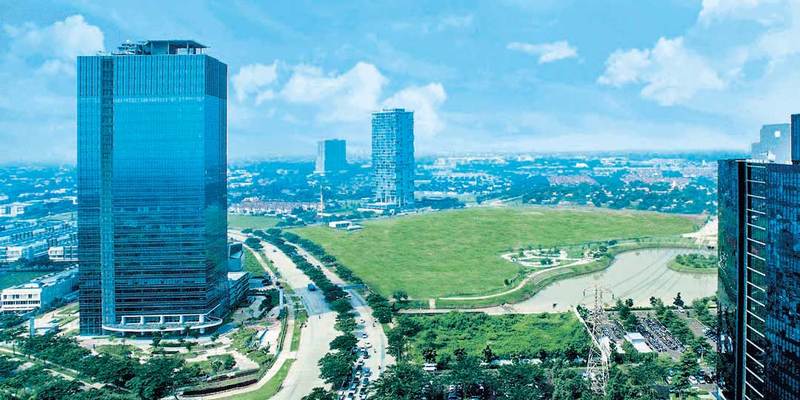 The gated community of PIK is located in parts of Penjaringan and Kapuk respectively located in the North and West Jakarta. It has one of the most prestigious residential areas on par with those inside the city, namely Menteng, Pondok Indah, and Puri Indah.

The Agke Kapuk Nature Tourism park is 100 hectares wide privately owned protected mangrove forest located within PIK. The park first opened in 2010, and its infrastructure is currently in a very well maintained state, with additional facilities including ecological resorts and bird watching facilities.

Despite some growing controversy and criticism concerning recent floods allegedly caused by violation of the city’s land-use plan, PIK has put forward a valiant effort to keep up with sustainability practices.

In May, Deputy Governor of Jakarta for Spatial Planning and Environment, Oswar Mungkasa, officially opened the launch of PIK’s River Clean Up program together with Luhut Binsar Pandjaitan, the Coordinating Minister for Maritime Affairs. This program is part of the government’s and PIK’s commitment to reduce plastic waste dumped in the ocean by 70% by the year 2025.

This program employs River Cleaning-up System (RCS) in order to rid the ocean of excessive plastic wastes. The system operates by picking up plastic waste from rivers flowing out to sea and stores them in large-sized disposal bags through dedicated conveyor belts to the riverbank. Gathered waste is then sorted for recyclable waste before transporting the rest to designated landfills.

Minister Luhut has stated that the RCS system may be readjusted and employed in other main rivers of Jakarta as well upon the completion and successful implementation of this pilot sustainability project. 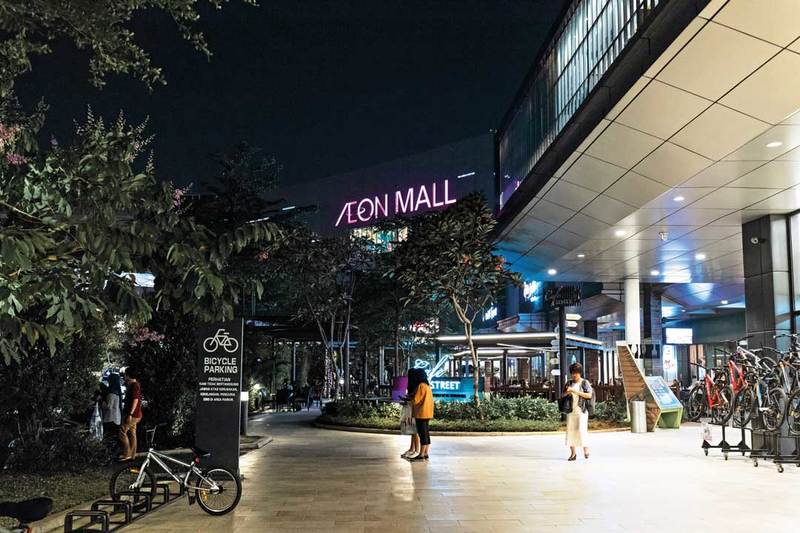 Alam Sutera first began construction in 1994 in an 800 hectares land at Serpong, Tangerang. In 2016, Alam Sutera had launched 37 residential clusters, each comprising of 150 – 300 houses supported with a range of premium facilities, including education, entertainment, as well as shopping and healthcare centres.

Inorganic waste collection, along with various other innovative programs, has been a regular weekly event since 2014 in Alam Sutera neighbourhood. Starting in 2016, the developers decided boost resident involvement by enacting inorganic waste collection contest themed Friends with Inorganic Waste. Through this activity, residents were invited to collect plastic bottles, papers, magazines, and others in the hope of motivating people in waste sorting so they will get accustomed to sorting waste in their own home. Collectively implemented, this good habit can sensitize citizens about the need for waste reduction in the household, which in the long run will have better impact on the environment. Inorganic wastes that are already sorted will be given to recycling centres to be re-created into useful items.

Alam Sutera property development company is committed to improve welfare and environmental sustainability by becoming partner and supporting a number of initiatives. One example is the Planting 25 Tree For A Lifetime initiative which was started by Tangerang City government at Alam Sutera social and public facilities area. Going forward, Alam Sutera remains open to work on a number of sustainability project as part of their commitment to provide better, more sustainable living conditions.. 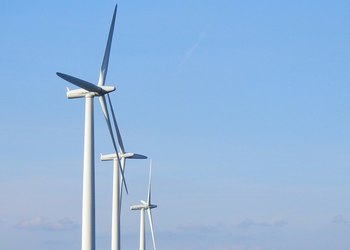 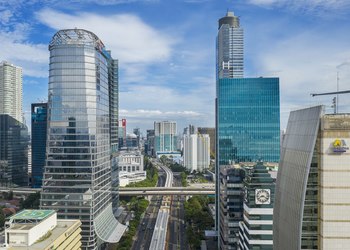