Jakarta’s origins date back to the 5th century AD and the founding of Sunda Kelapa port on the Ciliwung River during the reign of King Tarumanegara Namun. By the 12th century AD it was established as the main port of the Hindu Kingdom of Sunda. Due to the rapid growth of Islam in the early 16th century, the King of Sunda sought assistance from the Portuguese at Malacca.

On 21 August 1522, a treaty of friendship was signed between the Kingdom of Sunda and Portugal. The Portuguese received the right to build a warehouse and erect a fortress at Sunda Kalapa and, in return, the Portuguese would protect the Hindu Kingdom from the rising Islamic Sultanates.

This agreement was viewed as a threat by the Sultanates of Demak and Cirebon and before the fort could be built their combined forces under the leadership of Fatahillah attacked. They took the town and to commemorate their victory they changed the name of the city to Jayakarta Peristiwa on 22 June 1527 – now celebrated as Jakarta’s birthday.

In 1611, Dutch merchants of the VOC trading company purchased land rights from Prince Jayawikarta and built a warehouse(s) on the east bank of the Ciliwung River. To keep the European powers in balance, Prince Jayawikarta also allowed the British to erect warehouses and a fort on the opposite side of the river. In 1618, fortifications were added to the Dutch complex (Fort Jacatra), which caused tensions. The Sultan of Banten accused Prince Jayawikarta of making an unauthorised agreement with the British and planned to have him removed.

Prince Jayawikarta reacted and in December of 1618 his soldiers besieged the Dutch fortress. War involving the Dutch, British, Portuguese, Prince Jayawikarta and the Sultan of Banten ensued. The victorious Dutch expelled the residents of Jayakarta and razed the city to the ground. On 2 July 1619, it was decided to establish a city and to expand the fort; the new city was given the name “Batavia”

Dubbed “The Jewel of Asia”, the city was completed in 1650 based on Dutch urban planning; with a fortress (Kasteel Batavia), city wall, public-square, churches, canals and tree-lined streets. The city was established to be a trade and administrative centre for the VOC. It was not a colonial settlement and was unattractive for private business.

As a result, there was no migration of Dutch families and there were few Dutch women in Batavia. A mixed society was formed between Dutch men, Asian women, foreign merchants, Chinese labourers, German mercenaries, locals, freed slaves (mostly Portuguese captives) and imported slaves. This societal pattern created a mixed group of inhabitants known as “mestizo” who as citizens of Batavia were called "Batavianen", later simplified as “Betawi".

The Javanese were not allowed to reside within the city walls and consequently settlements grew outside the walls. In 1688, complete segregation was enacted upon the indigenous population with each ethnic group being forced to live in its own established village outside the city wall. By the 1730’s sugar production, a major export commodity and employer of local labour, had deteriorated.

This resulted in high unemployment especially among imported Chinese workers. Tensions grew as attempts were made to restrict Chinese immigration. Riots erupted and between 9 – 22 October 1740, 10,000 Chinese were massacred and the remaining Chinese inhabitants were moved outside the city walls to the area now known as Glodok.

Coastal erosion and large-scale cultivation caused destruction to the environment; the canals silted-up and had to be continuously dredged and required extensive maintenance. Due to silting, the fortress was eventually 2 km from the shore and the Sunda Kelapa port canal had to be continuously lengthened. In the 18th century, Batavia became increasingly affected by malaria epidemics, as the marsh areas were breeding grounds for mosquitos. The disease killed many Europeans, resulting in Batavia receiving the nickname "the cemetery of the Europeans".

The VOC lost their spice trade monopoly, went bankrupt and was dissolved in 1800. As a result of the Napoleonic wars, Dutch assets were seized and Batavia, together with all the VOC’s territorial claims, became a fully-fledged colony named the ‘Dutch East Indies’. In 1808, it was decided to quit the dilapidated and unhealthy old town and move to the south (now Central Jakarta).

Batavia thereby became a city with two centres: the old town Kota, the hub of business, where the offices and warehouses of shipping and trading companies were located, and the new southern hub for the government, military, and shops. These two centres were connected by the Molenvliet Canal and a road (now Jl. Gajah Mada) that ran alongside the waterway. Epidemics in 1835 and 1870 encouraged more people to move farther south, a trend that continues to this day.

During the Japanese occupation, the Indonesian nationalists declared independence on 17 August 1945, and renamed the city “Jakarta”. The city was officially proclaimed the national capital on 27 December 1949.

_______
Text by Sake Santema, an antique map dealer. This article is originally from paper. Read NOW!Jakarta Magazine June 2018 issue “City of the Future?”. Available at selected bookstore or SUBSCRIBE here. 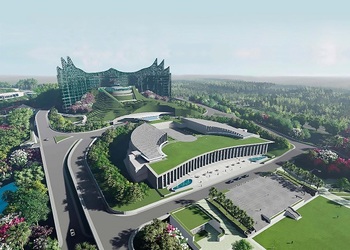