Jakarta turns 491 years old on 22 June and its residents are sure to give it a proper celebration. As anyone who has spent any time here can attest, the city has gone through its multiple ebbs and flows over the centuries, which has, of course, made it what it is today. But what lies ahead?

As we sigh in disdain when stuck in unexpected gridlock, or cringe when we have to wade through pools of water when a tropical shower floods the streets, perhaps a bit of optimism is in order. The MRT is on track for completion (which might ease congestion on the major thoroughfares),  a new museum for art lovers to indulge in (and pose for the myriad social media posts making waves in recent months) and a more efficient, streamlined process for administrative services (which could make workers more productive as no time off from work is needed).

In this section we cover some of the latest developments as we head toward what we like to call the “New Jakarta”.

We begin, however, with the vision for the city which was outlined by Governor Anies Baswedan.

In a speech shortly after taking office in October 2017, Anies affirmed that development is not only focused on physical buildings such as magnificent infrastructure with modern technology, but also human development through education quality, health care, security, prosperity and happiness to Jakartans, as he stated.

In press reports released at the time, he was noted as saying that physical and human development must be supported by development in culture and community involvement. People not only participate, but they are also the main power behind development.

He stressed that his office will undertake at least five missions to strengthen such vision.

First: To create a safe, healthy, smart, and cultured city by strengthening family values and creativity spaces through leadership that is inclusive.

Third: Jakarta will be a city where the civil apparatus works properly;  where it will serve—and solve—the problems of both the city and its residents effectively, meritoriously and with integrity.

Fourth: Transforming Jakarta into a conservative city by supporting development through social strength. The main concept for this mission is continuous development.

Fifth: Jakarta will be transformed into a dynamic capital as a node of Indonesia’s advancement characterised by justice, a celebration of nationality, and diversity. 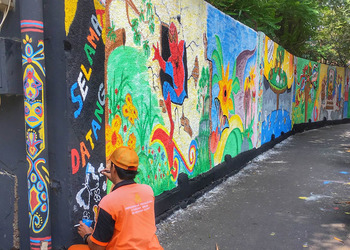