Hundreds of thousands of birds are taken out of Indonesia’s forests for bird trade each year, and not all of them even make it to the markets alive. As a result, a number of species are undergoing population declines, with some of them on the brink of extinction. 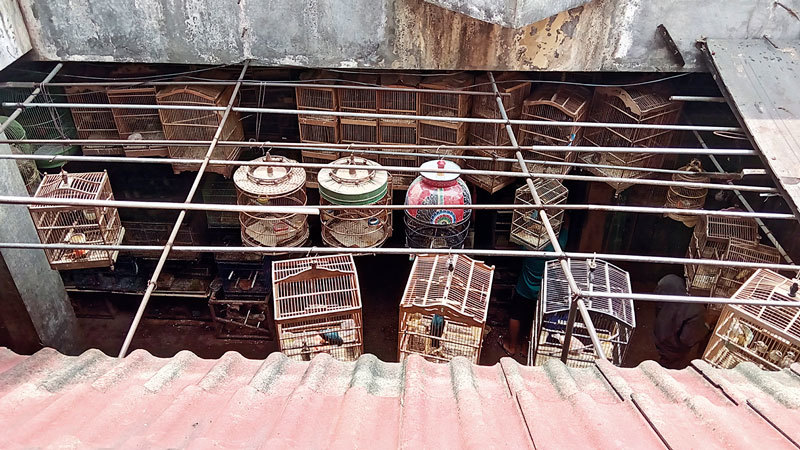 Pasar Burung Pramuka, located in the eastern part of Jakarta, consists of two old multi-storey buildings. Its most distinctive feature is a tangy unpleasant smell, accompanied by the screeches of locked up and chained birds. An estimated 250 kiosks, operated by over 150 sellers, are housed within the market. Most kiosks store at least 30 cages of birds or other animals - if visitors know where to look and who to ask, they can even purchase black apes and orangutans.

Many of the birds are squeezed into these cages in large numbers, leaving them with hardly enough room to spread their tiny wings. While some try to flutter excitedly in the small space, others are just tucked away quietly in a corner, resigned to their fate in such a vile environment. Beautiful parrots and mynas are prisoners here, chained to perches and only able to move back and forth a couple of centimeters.

Though smaller in size, the bird markets PasarBurungJatinegara, also located in East Jakarta, and PasarBurung Barito in the southern part of the city are in a similar state. According to MarisonGuciano, a senior investigator at local NGO Scorpion Wildlife Monitoring Group, the overwhelming majority of animals that are up for sale at these three markets have been obtained illegally.

Marison’s statement is supported by the data in a research conducted by TRAFFIC Southeast, a wildlife monitoring network that focuses among others on illegal bird trade in the region.

“In a complete survey of the three markets in Jakarta carried out in July 2014, we counted a whopping 19,036 birds of 206 species,” says Serene Chng, programme officer at TRAFFIC. “As many as 98 percent of the birds were native to Indonesia, and one-fifth found nowhere else in the world. Most of these were harvested outside of the national harvest quota system or in direct violation of laws protecting select species. Species recorded include the Critically Endangered Bali Myna, Black-winged Myna and Rufous-fronted Laughingthrush.” 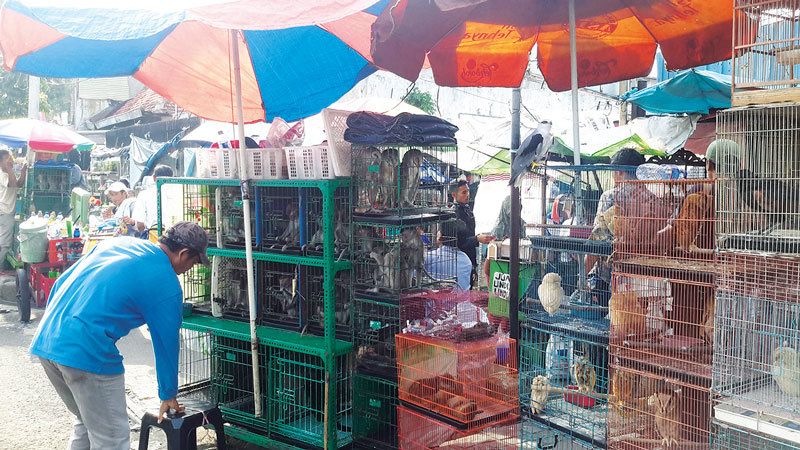 Endangered species
In 1973, a multilateral treaty aimed to ensure that international trade will pose no threat to the survival of any species, came to being. The international agreement was known as the Convention on International Trade in Endangered Species of Wild Fauna and Flora (CITES), and came ten years after a historic meeting of the member countries of the International Union for Conservation of Nature (IUCN).

CITES classifies plants and animals according to three different categories, or appendices, based on how threatened they are.

Appendix I (including the Sumatran tiger, the maleo and the yellow-crested cockatoo) lists species threatened with extinction. CITES prohibits international trade of these species except when the purpose of the import is not commercial. Appendix II (including the pangolin, emperor scorpion and eagle) contains species that are not threatened with extinction yet but that might suffer a serious decline in number if trade is not restricted, whereas Appendix III (including the binturong and the olingo) lists species that is protected in at least one of the countries that are members of CITES and that has called upon others for help regarding the control of international trade in that species.

At all the three markets in Jakarta, you can find animals that appear in the three appendices, although many sellers hide those that are listed in Appendix I and II and keep them out of sight – sometimes outside of the market – until they can “trust” the potential buyers.

“Almost all the native birds recorded in our surveys are believed to be caught from the wild - this is based on our knowledge that there are no known legal commercial breeding of most species, the skittish behaviour and poor condition of birds observed and the unlikely numbers in which the birds are sold,” Serene explains. “We also saw the bodies of dead birds during our surveys.” 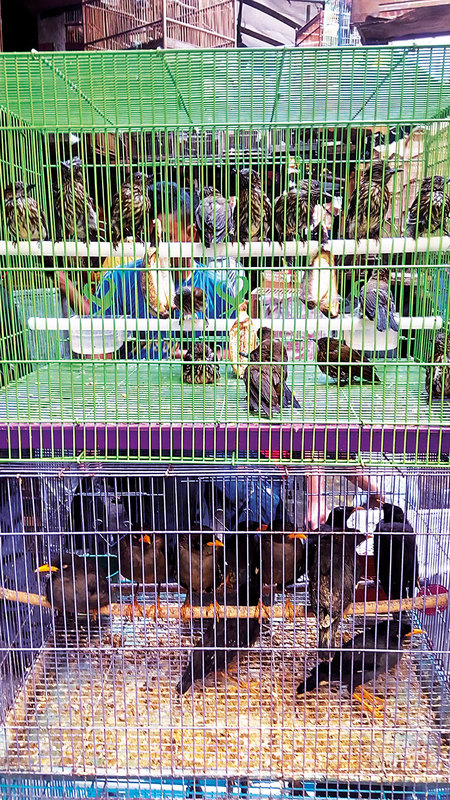 Marison adds that most of the kiosk owners do not have the proper documents that would allow them to legally sell the birds or other animals.

“They don’t have permits from the Ministry of Environment and Forestry [KLHK] and Natural Resources Conservation Agency [BKSDA] that would allow them to transport wild animals and plants within the country,” he says. “These letters are called Surat Angkut Tumbuhan dan Satwa Liar Dalam Negeri and are issued by BKSDA. But in reality, most of the sellers don’t have such a letter.”

A well-organised crime
Marison explains that there is a quota system applied to each forest. Hunters are allowed to take a certain number of several species from the forests, but they may not go beyond the limit.

“But they catch more animals than they are allowed to, including the endangered ones,” he says. “Animals coming from Sumatra enter Java through Merak Port [in Banten] while those coming from Central and East Indonesia come through Tanjung Perak Port [in East Java].”

According to Marison, the animals are usually hunted and kept at temporary shelters before being transported by air, land, or water to bigger shelters. Here, the internal or external organs of some of the animals are taken (e.g., shark’s fin) while the dangerous ones are paralysed by extracting fangs or removing poison glands to make them less harmful. They are later transported to the sellers or markets where they end up for sale as pets, or worse, as food or ingredients for traditional medicine. 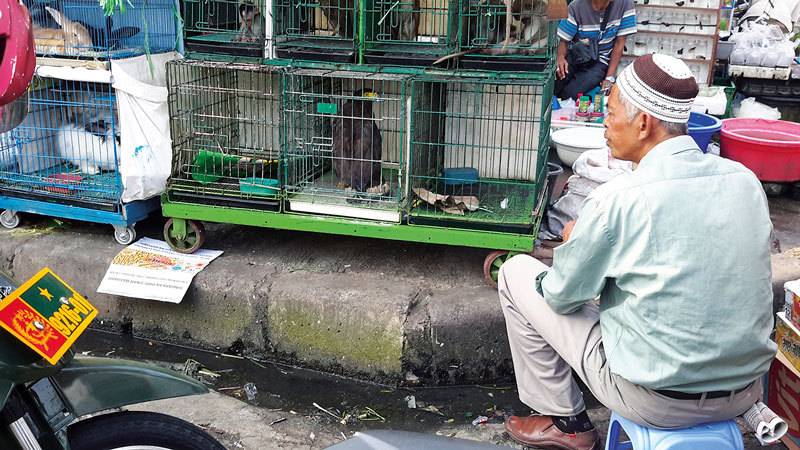 This is a well organised crime and the people involved — hunters, middlemen, couriers, sellers — work in a very secretive manner. Since the rise of the digital era though, most transactions are made online.

“They’d post pictures of the animals on social media platforms with various aliases to protect their real identities,” Marison says. “The buyers are then instructed to transfer the money to their bank account – also under an alias. Later, they’d instruct the buyers to meet at a certain place to pick up the animals, or sometimes they’d send the animals directly to the buyers’ homes.”

The poachers, however, are very cautious and would cancel any transactions if they feel the buyers are “suspicious”.

Together with a number of partner organisations, TRAFFIC held the first Asian Songbird Trade Crisis Summit, gathering various organisations and individuals working on the bird trade in Indonesia to develop a strategy to tackle this issue. Under the strategy, four main areas of work have been identified: field and genetic research; trade, legislation and enforcement; conservation captive breeding and management of assurance colonies; as well as community engagement, communication and education.

“Under the trade component, there is a need to continue collecting information from markets to detect any changes in the trade such as emerging issues or priority species. We also need to ensure that all priority species get the legal protection they need. Most importantly, cooperation between conservation groups and enforcement agencies for effective regulation and enforcement is necessary to punish and deter traders who persist in selling birds illegally,” Serena says. 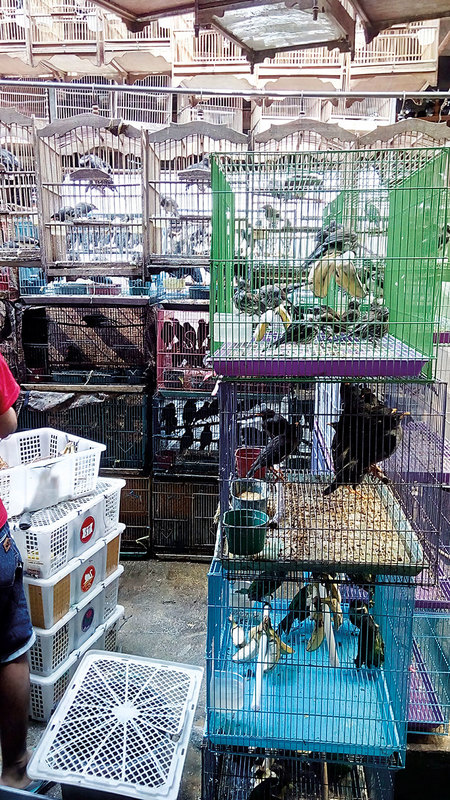 Efforts by the government
When it comes to legal punishment for illegal wildlife trade, Indonesia’s Law No. 5 of 1990 on Conservation of Natural Resources and Ecosystem states that those involved in this practice could serve a maximum of five years in prison and face a maximum penalty of IDR 100 million. Compared to the scale of the crime, however, this punishment hardly seems enough.

Just do the math. Local hunters from Aceh, for instance, sell one baby orangutan for IDR 1 million. By the time it is transported to Medan, it already costs between IDR 5-10 million. When it has reached Java, the price has gone up to IDR 40–100 million and when it is sold at international black markets, it can reach unbelievable sums of around IDR 400 million. A penalty of IDR 100 million therefore seems relatively low, also in regard to the environmental damage the poachers cause.

At the moment, the draft bill is still waiting for approval by the House of Representatives (DPR). So what is to be done in the meantime?

AwenSupranata, head of BKSDA Jakarta, says that the agency does face some challenges in addressing the problem. Sending undercover staff to the markets to track down and catch the sellers who are involved in illegal trade has proven to be more challenging. The black market vendors are often wary and suspicious at customers who ask too many questions. 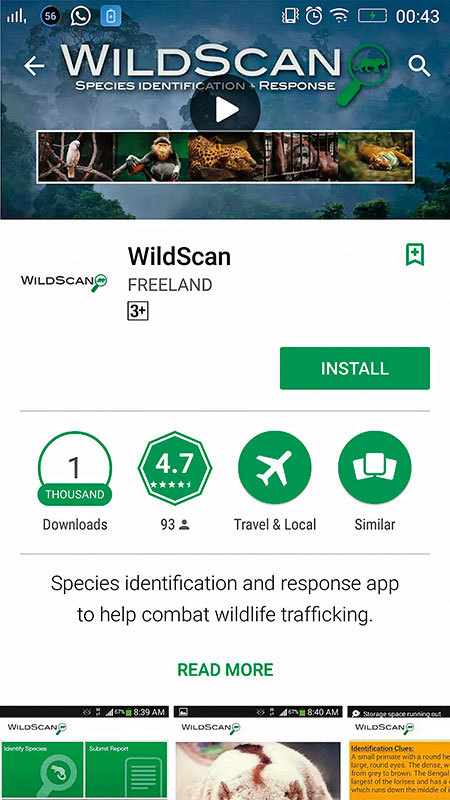 “To educate the sellers, we’ve handed out brochures [about illegal trade] with a list of animals that are allowed to be sold as their reference,” he explains. “We have also invited representatives from the market, about 30 to 40 people, to a seminar regarding this issue so they will understand and stop this practice.”

Moreover, KLHK has come up with another solution to combat illegal wildlife trade, according to KLHK senior official AchmadPribadi.

“There is a mobile app called WildScan, created by the [Thailand-based] Freeland Foundation and funded by USAID. KLHK helps to run this app in Indonesia,” he says. “WildScan is an app that allows the public as well as law enforcers to quickly identify protected species by providing photos and information of the species.”

Launched in Jakarta last year, this app is available in several languages including Indonesian, as this country has a globally notorious reputation for poaching and illegal wildlife trade. Featuring more than 500 species threatened by the crime, everyone can download it for free.

However, many believe that shutting down the markets would be a better and more effective solution. City-owned market operator PD Pasar Jaya, however, doesn’t have such plans. 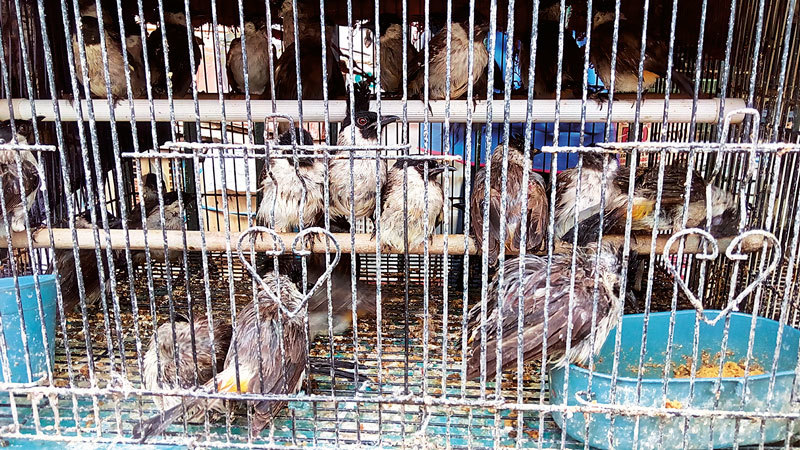 “Unlike Pasar Barito and Jatinegara, PasarPramuka is under the management of PD Pasar Jaya. In response to the issue of wildlife trade allegedly happening at PasarPramuka, we routinely conduct raids on the stalls and inform the sellers that trading protected rare species is against the law, and that the government will close their kiosks if they disobey,” PD Pasar Jaya Chairman AriefNasrudin said.

“However, we don’t think that shutting down the whole market is the best thing to do because this could hurt the livelihoods of the sellers who [might] actually abide by the rules. Instead, we only need to take care of the irresponsible individuals.”

To complicate the matter, the illegal trade of birds – and other animals, for that matter – turns out to be two-sided. According to Marison, many of the buyers are local, but there has also been an increasing demand from collectors of rare birds and other animals from Middle Eastern countries.

“At the end of the day, the demand for wild birds in Indonesia needs to be addressed,” Serene says. “It can only be reduced with the help of the very people who buy and keep the birds.”