Photographer Dilla Djalil-Daniel Reflects on Relationship Between Humans and Animals

In a solo exhibition and accompanying book, photographer Dilla Djalil-Daniel combines her passion for animals and traveling. Presenting four different photo series, she observes and reflects on the often complicated relationship between humans and animals. 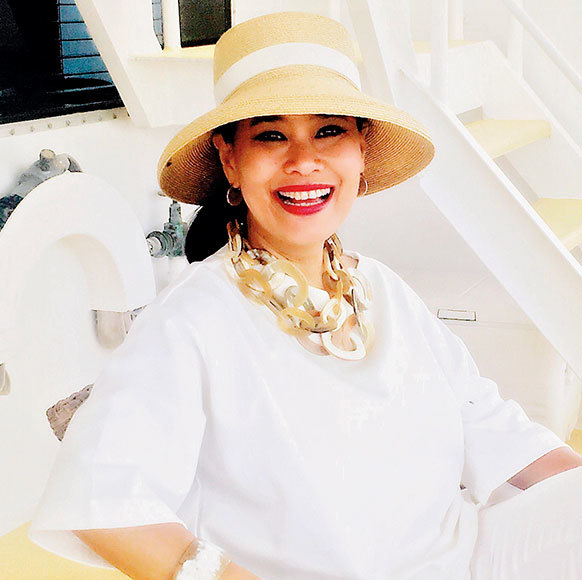 When she was nine years old, Dilla Djalil-Daniel received a little Kodak camera as a birthday present from her father - and she was hooked immediately. Her interest in photography only grew when she was in high school and upgraded her camera gear.

“I started to earn some pocket money by taking portraits of my friends,” Dilla recalls. “They used to come to our house after school, asking me to take their pictures.” 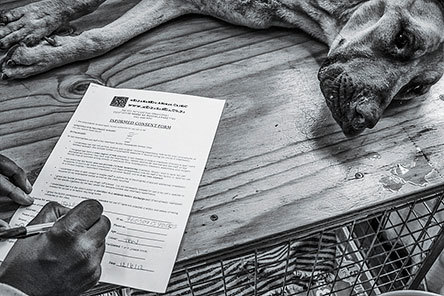 Initially, Dilla wanted to become a vet, but she quickly realized that her science grades were not good enough to pursue this career path. Her second choice was to study photography, yet her father - as a concerned parent - convinced her to take up something with more “substance”.

“I eventually enrolled at Universitas Indonesia and majored in English Literature,” Dilla says. “While still studying and after graduation, I worked for an advertising agency, and I was too distracted with assignments to continue photography as a hobby.” 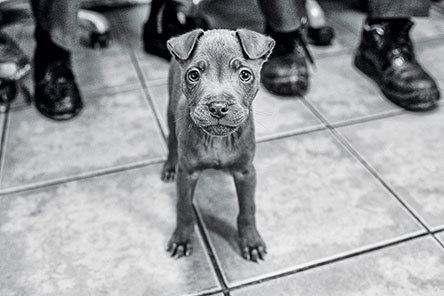 After getting married in 1994, Dilla followed her expatriate husband overseas. She picked up the camera again, but the photos she took were mainly holiday snaphots to document her travels. At that time, she says, she hadn’t been exposed to photojournalism yet. This changed when she relocated to Indonesia.

“I finally bought a semi-professional camera, and that’s when I thought, I better take photography more serious now,” Dilla explains. “After a long hiatus, I knew it was time to start again.” 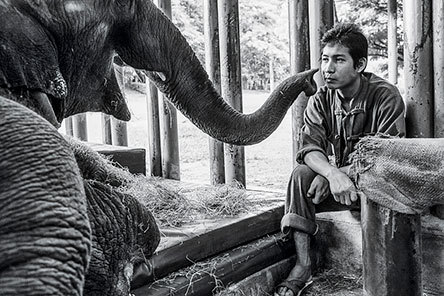 In 2010, she joined a photojournalism workshop conducted by a British photographer in Bangkok.

“I did not get on well with my teacher, to be honest,” Dilla admits, laughing. “But still, he was the one who opened my eyes towards photojournalism. When I came back to Jakarta, I told my husband that I have finally found a genre that I like.” 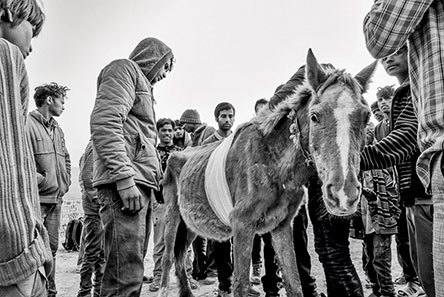 More workshops in different parts of the world followed - Dilla is an alumnus of the Foundry Photojournalism workshop, the Momenta Documentary workshop and the Obscura Workshop, often being mentored by award-winning photojournalists.

In her first solo exhibition, currently showing at Dia.Lo.Gue Artspace in Kemang, Dilla presents four photo stories that document one of her favourite topics - the relationship between humans and animals in all its different forms and shapes. In conjunction with the exhibition, Dilla has also launched her book “A Trunk and Other Tails”. 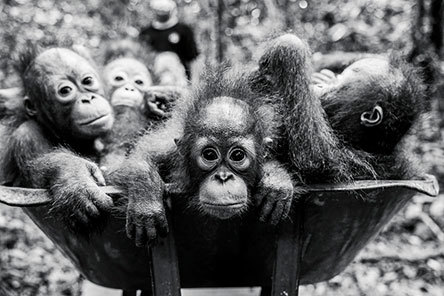 “How very complex our relationship with animals is,” says curator Irma Chantily. “We live with them and we domesticate them and we consume them. Not ‘or consume’, but ‘and consume’. In completing her four stories in this book [and exhibition], Dilla has journeyed to the far reaches of the globe. And wherever she goes, she finds the complexity in the relationship between humans and animals: the care and the abuse, feeding them and enslaving them, living together in the same food chain.”

Dilla’s journey has taken her to Friends of the Asian Elephant (FAE) hospital in the Mae Yao National Reserve in Lampang, Thailand; the non-profit organisation Yayasan Inisiasi Alam Rehabilitasi Indonesia (YIARI) in West Kalimantan whose main purpose is to rescue, rehabilitate and release orangutans back into the wild; the Mdzananda Animal Clinic in Khayelitsha township, Western Cape, South Africa; and finally to the Donkey Sanctuary in Nepal. 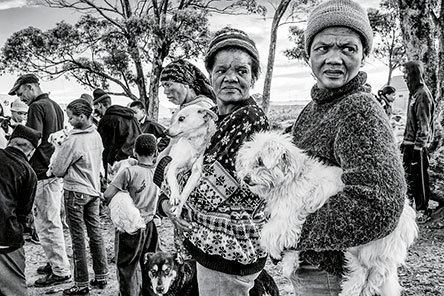 “Dilla visited my foundation’s Elephant Hospital a number of times and has bonded so well with our permanent residents, especially Mosha, who lost one of her legs from landmine injuries,” says Soraida Salwala, the founder of FAE hospital. “Our work to treat sick and injured elephants is always challenging. Thanks to Dilla who has captured the moments of those lives at the FAE Elephant Hospital so well. The photos of both our patients and our staff who dedicate 24 hours a day to take care of them are magnificent. They portray the ‘LOVE’ in black and white so crystal clear that they bring tears to my eyes.”

Dilla’s photo series about the elephant hospital and the dogs in South Africa are both results of the workshops she joined in 2012. 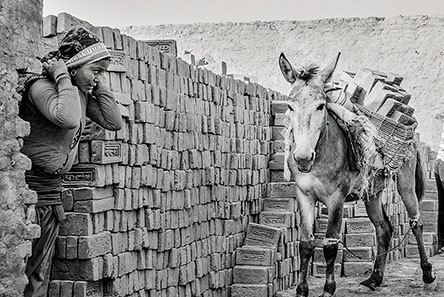 “In South Africa, I told them that I wanted to do an animal story, and they referred me to the Animal Clinic,” she recalls, adding that the clinic was founded by a local good Samaritan and resident of Khayelitsha, who was so concerned about the welfare of his neighbourhood’s pets that he often fed and bathed them himself, and was soon joined by volunteers.

To have a common thread for her book and exhibition and to include her home country, Dilla decided to feature the story about orangutans as well. YIARI is a branch of the NGO International Animal Rescue and was established in 2008 with the aim to rescue baby orangutans which have been sold illegally as pets. They are given survival training - they learn how to climb, to make nests and to look for food, before they are eventually released into their natural habitat again. 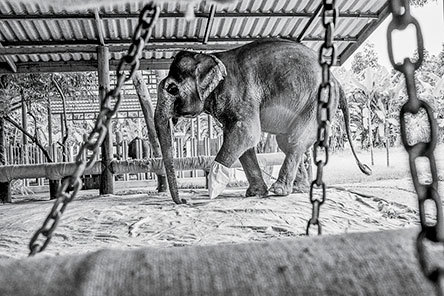 Dr. Ian Singleton, Director of the Sumatran Orangutan Conservation Programme, says that he observed the emergence of new environmental and animal welfare associations in Indonesia over the past years - but that despite their efforts and dedication, they still need the support from the government as well as other supporters, allies and funders.

“By taking these moving and highly emotive pictures, and now in publishing this book [and holding the exhibition], Dilla is making a major contribution to promoting these issues and speaking out for the animals and those that care for them, and in doing so garnering yet more much needed support from the global community,” he says. 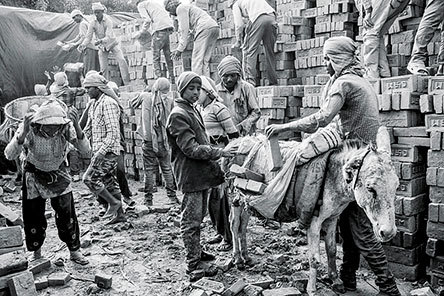 Her last journey took Dilla to the Donkey Sanctuary in Nepal, recommended to her by a fellow photographer from Singapore. In the brick kilns of Kathmandu Valley, hundreds of equines - donkeys, mules and horses - transport the bricks to the kilns, having become the backbone of brick production.

“Most of the animals come from India, and their condition is appalling,” Dilla says. “Those who are sick are simply left to die. In 2008, Animal Nepal launched an outreach programme to help and improve the condition of these animals. They not only house and take care of rescued and retired donkeys in their sanctuary, but they also teach the owners of the brick factories as well as the owners of the donkeys how to treat the animals correctly. After all, their production depends on the animals. Their condition has much improved since then.”

Dilla hopes that her book and first solo exhibition will help her to gain a foothold in Indonesia’s photography scene. At the same time, she can’t wait to plan her next trip.

“I was so busy with this project that I didn’t have the time to travel,” she says, laughing. “Now I am starting to feel that itch again.”

A Trunk and Other Tails
Until April 9
Dia.Lo.Gue Artspace
Jl. Kemang Selatan No. 99A, South Jakarta