Restoring the Forest on the Kampar Peninsula

Restorasi Ekosistem Riau brings together the private and public sectors to restore and conserve ecologically important forest areas on the Kampar Peninsula and Padang Island in Sumatra.

Indonesia is known for the beauty of its nature, in terms of the country’s spectacular landscape and coastlines. But the country is also home to some of the richest biodiversity in the world. According to Professor Jatna Supriatna from the Institute for Sustainable Earth and Resources, at the University of Indonesia, about 12 per cent of the world’s mammal species are to be found in Indonesia, 17 per cent of birds, 16 per cent of amphibians and reptiles, 25 per cent of fish and 15 per cent of insects.

But many of these populations are under threat due to the loss of habitat, poaching and the wildlife trade. The protection of their current habitats is critical to maintaining their population, which in turn is essential for maintaining the balance between human and animal ecosystems.

Restorasi Ekosistem Riau (RER) is a collaborative project that brings together groups from both private and public sectors to restore and conserve ecologically important peat forest areas on Indonesia’s Kampar Peninsula and Padang Island in the province of Riau, Sumatra. Established by APRIL Group in 2013, RER is an ecosystem restoration programme aimed at protecting, restoring and conserving ecologically important peatland forests. The programme includes 150,000 hectares of forest - an area twice the size of Singapore.

RER has now recorded 757 plant and animal species resident in the Kampar Peninsula as of June 2018. 48 are classified as globally-threated species, including the critically endangered Sumatran Tiger and Sunda Pangolin. This builds on RER’s previous biodiversity conducted by RER partner Fauna & Flora International (FFI) in 2015. The new total is the result of continued biodiversity monitoring by RER field teams, utilising camera traps and ocular surveys.

RER is also home to species of wild cats that have been listed as endangered by the the International Union for Conservation of Nature (IUCN). The Sunda Clouded Leopard – the larger of the cat species in RER - has been detected moving in pairs and research is ongoing to verify if this is a pair of siblings or a male-and-female pair.

Of the 757 species identified so far, 304 are birds, 107 are amphibians and reptiles, 71 are mammals and 89 are fish. The remaining 186 species are plants. New species identified during the past six months include the Gray-faced Buzzard, Blue-winged Pitta and the Malay Night-Heron.

Here are some of the endangered species identified which their habitat is protected through the restoration work in RER:

Malayan Sun Bear
With an insatiable appetite for honey and honeycombs, the Malayan Sun Bear is known as the ‘honey bear’, with the bear’s Indonesian name of ‘Beruang madu’.

The Malayan Sun Bear holds a Vulnerable (VU) conservation status issued by the IUCN. The sun bear is considered to be the smallest of the bear species, with adults typically being about 120 to 150 cm long and weighing 27 to 80 kg. The bear’s paws are large and heavy, while its claws are large, curved and pointed – features which are thought to be ideal for extensive climbing of trees.

Besides honey, the omnivorous Malayan Sun Bear feeds primarily on bees and beehives, termites, ants, beetles and fruit, especially figs. It has an exceptionally long tongue of 20 to 25cm which it can extend during feeding to extract honey and insects.

RER harbours a good and healthy population of Malayan Sun Bears, proven by numerous images and video clips of female bears wandering the area with their cubs of varying ages. It is not uncommon for the RER team to come across trees with claw marks from the Malayan Sun Bear, while roaming the forest.

Storm Stork
The Storm’s Stork is a black-and-white stork with a red bill. It has orange facial skin, with a yellow area around its eye. It is a medium-sized stork, standing 75cm to 91cm tall on slender, dull red legs.

The bird is generally solitary, but can be found in small groups occasionally. Adult storm’s storks are monogamous, forming a male-female bond which lasts many years. The Storm’s Stork lives primarily in dense lowland tropical forests, particularly freshwater and peat swamp forests.

It is described as a secretive species, typically foraging stealthily with slow movements along muddy banks of rivers or creeks, keeping largely to shaded areas. The bird feeds primarily on small fish, frogs, and aquatic larvae insects. Unlike other storks, the Storm’s stork will also forage on forest paths away from water bodies in search of small ground dwelling vertebrates.

Since 1994, the Storm’s Stork has held an Endangered (EN) conservation status issued by the IUCN. EN species are species with a very high risk of extinction as a result of population declines of 50 to more than 70 per cent over the previous decade or three generations.

RER team has recorded the Storm’s Stork to be a resident species within the Kampar Peninsula, meaning it is a species that is present throughout the year, and breeds locally. 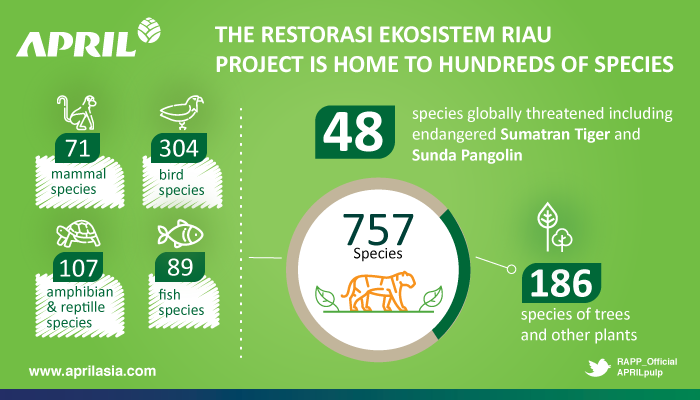 Found in Indonesia and Malaysia, the species is the largest freshwater turtle in Southeast Asia. It is a semi-aquatic species, inhabiting large lakes, swamps, and slow-flowing rivers.