Coalition of Pedestrians Fights for Rights

One may have a vivid memory of what happened back then in 2012 at the Tugu Tani bus stop in Central Jakarta when the car driven by Afriany crashed, hit 15 pedestrians and taken away 8 lives causing major destruction of public facility and preposterous loss. The horrible accident is a mirror to the lack of road safety, tells the story of how risky to become a pedestrian in Jakarta. The past momentum has gained empathy from other denizens, generated into a bigger movement to force the government to establish a proper sidewalk for pedestrians and inspire people to walk more.

Since the devastating tragedy was covered with news cycles in years, the activism to demand a right for the pedestrian in Jakarta hasn’t stopped there. Koalisi Pejalan Kaki, a community whose members are pedestrians continue the vision to fight for pedestrian rights and demand inclusive access to those considered marginalised including disabled, women, senior citizens, and children.

On 22 January, Indonesia commemorates National Pedestrian Day (Hari Pejalan Kaki Nasional). Officially inaugurated by Governor Anies Baswedan in 2019, the annual commemoration becomes an awakening moment to invite people to join the social movement, fostering walking as an urban culture worth fighting for. “This community keeps growing and contribute to a bigger mission because we know that we are born to walk, to be pedestrians naturally. Everyone wants the same thing. It’s up to us as urban residents to fight for our rights,” Alfred Sitorus, one of the founders of Koalisi Pejalan Kaki, explained. 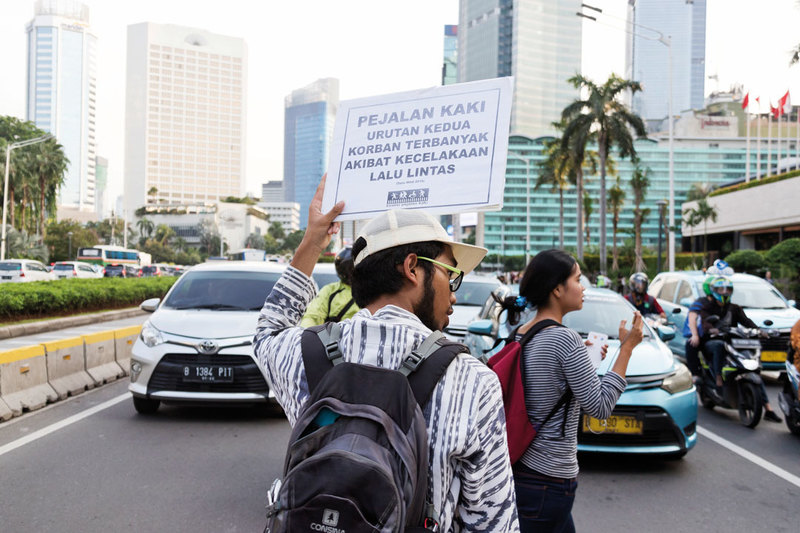 Since it was established in 2011, supported by Road Safety Association, Anthony Ladjar, Deddy Herlambang and Alfred Sitorus have been marching, going down the street and defending pedestrian from violation on the sidewalks. Every Friday afternoon, bringing poster signs and banners, activists mark certain pavements occupied by street food vendors or used as illegal parking with “Trotoar Untuk Pejalan Kaki” (sidewalk for pedestrian). They often have to argue with the occupants who feel disturbed by their activism which always based on the constitution.

“We have seen the progress over the past year, but many people keep breaking the law. Our duty as citizens is to make sure the process of law enforcement is upheld. We have to pay attention to children, seniors, especially women facing difficulties on the street. It’s not only building the decent sidewalk,” Sitorus affirmed. 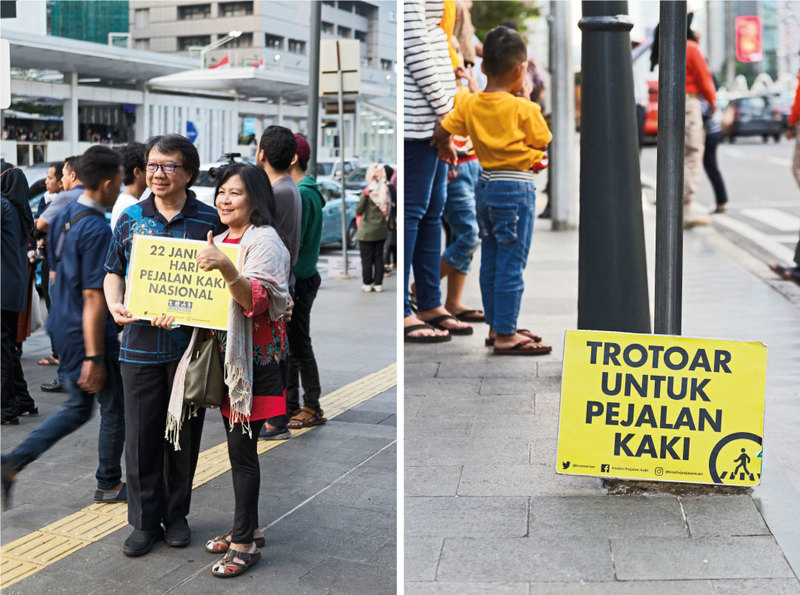 Over the last few years, many people have seen the progressive transformation and a commitment from the city government to establish Jakarta as a more pedestrian-friendly city with, seen from the current development to upgrade the standard of the sidewalks in every corner of the city. Regardless, it’s challenging for pedestrians to walk in the Jakarta sidewalk due to heavy reports of violation against pedestrian rights on the street. The community collected data from social media surveys, showing a high potential for sexual harassment to women, among other risk factors. Currently coordinated by young activist Sandy Apriliansyah, Koalisi Pejalan kaki advocates the public and push the government to reduce road fatality by up to 50 per cent until the end of the period in 2020. In achieving a total target of 2,600 kilometres worth of sidewalk, the community also pushes government agencies to build decent supporting facilities, such as crosswalks, crossing bridge (JPO) and traffic signs.

As activism spread in a number of cities in Indonesia, the community supervises the government programme to achieve the target determined on the National Plan for Safety (RUNK). Social media also takes a crucial role in spreading the campaign to the general public, activating public role to also report the situation on the street. “We are now inviting youth to foster the walking culture. The government have an obligation to provide infrastructure and facility for pedestrians. In exchange, the crowd of pedestrians could make anyone feel safe walking and increase the value of the economy, as we’ve seen at Shibuya, Manhattan, Malioboro and M Bloc,” Apriliansyah remarked. 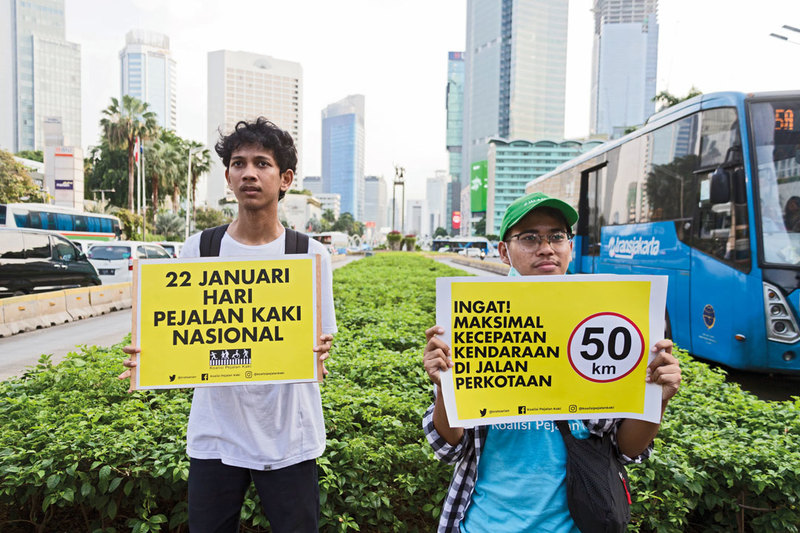 For anyone who has decided to walk, it’s still debatable as the current urban environment is unsafe for respiratory health. Pedestrian are more vulnerable to air pollution compared to those riding motorcycle or driving their cars. “The community also works with other road using communities, such as Bike to Work, to promote the campaign,” Apriliansyah added.

The community also encourages people to start adding their steps in daily mobility, finding the best way to walk in the city by discovering urban history and culinary experience by combining public transportation and walking while also promoting air quality improvement in the city. 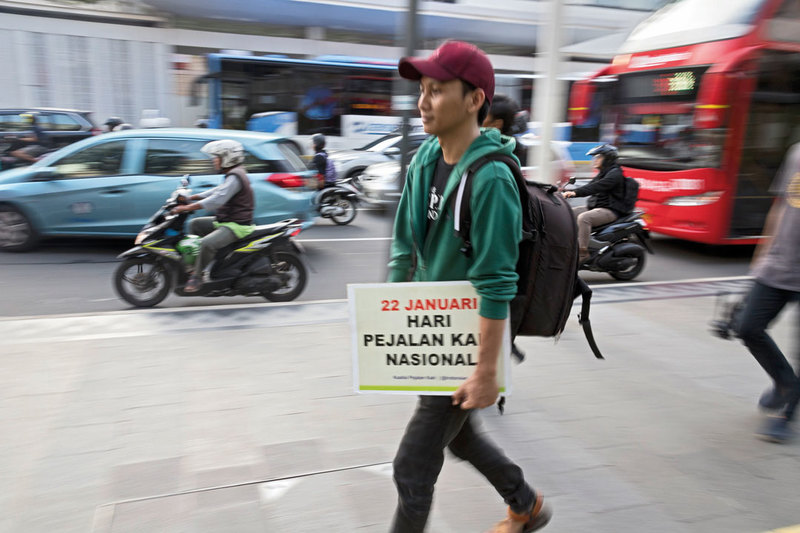 “Many people show the result of the daily step every day. Not to show off what we’ve achieved, but as long as it is for a better culture, I think it’s acceptable. Hopefully, people will be motivated until we actually don’t need to commemorate this as a national day because the most important thing is the movement—a massive initiative from people to find what it means to be pedestrian in the city,” Sitorus closed the statement.