Urban Farming and Green Alley Pilot Program: The Next Big Green for Jakarta

With a continually-growing world, urban population, climate change, limited agricultural land and natural resources, how can we feed today’s and tomorrow’s people?

Considering current conditions, global food security is paramount. How can we best utilise space, light and logistics amidst increasing urban population? How can zero waste and low energy technologies contribute to food production in an urban environment? The future of agriculture is growing soilless. With the rise of hydroponics, aeroponics and drip irrigation, the urban populace should be onboard to address the issues. 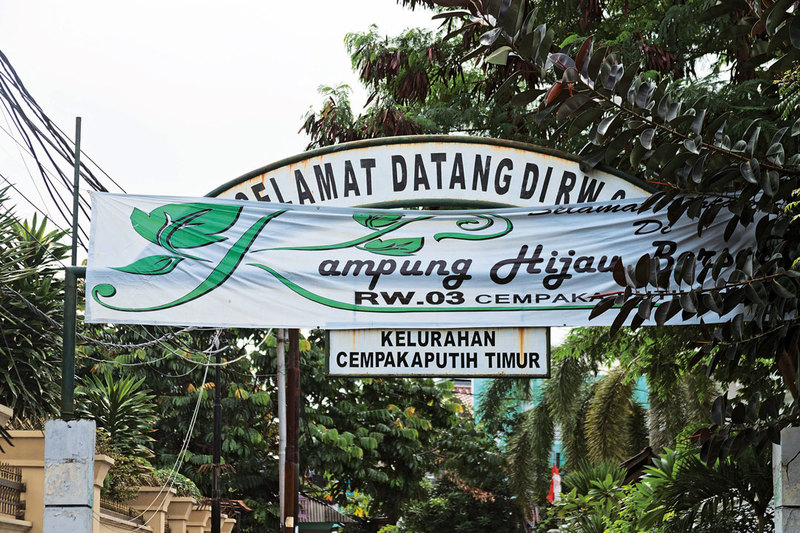 In the area of Cempaka Putih Timur RT 10 RW 03, Central Jakarta, a community called Gang Hijau (green alley) cohesively develop hydroponics in cultivating a green environment in Jakarta, in addition to get good quality vegetables from their plants. They are enthusiastic about farming even though they have no lands to cultivate. Various green plants and hydroponic units decorate their housing complex, along the main roads and alleys, creating greenery and beauty atmosphere. They named their area as Kampung Hijau Berseri (a glowing green village).

In 2016, the area has attracted the Jakarta’s government through Marine, Agriculture and Food Security Department (DKPKP) and made this place as a pilot of Gang Hijau (green alley) in Jakarta, a programme aimed at turning urban housing areas green. 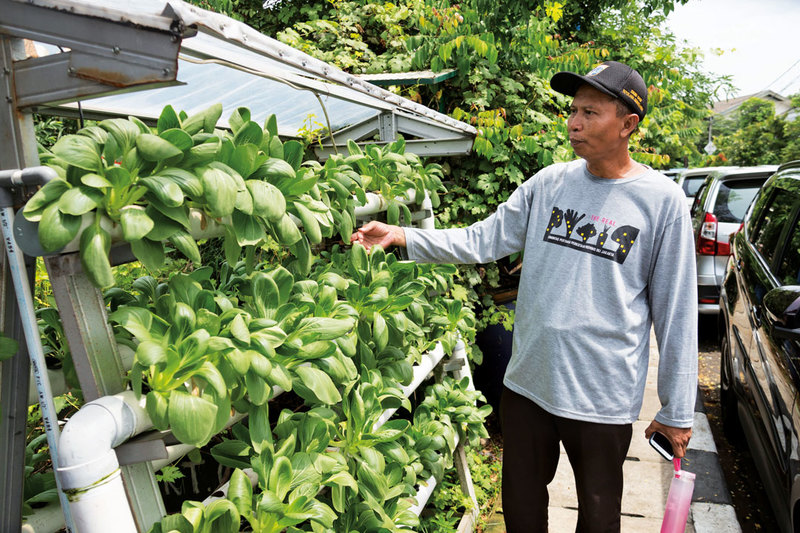 Adian Sudiana is the person behind the movement. He motivates the community to implement urban farming. He became aware about sustainable issue in 2002 and decided to learn farming and since then he often gives agricultural and rice field counselling in many parts around Indonesia. In 2011, he diligently learned about urban farming through workshops and trainings held by various institutions. Born and raised in the area, Adian initially only intended to create a green environment around his residence especially along the Rawa Kerbau river, near the housing complex, but he needed innovation by involving the community. 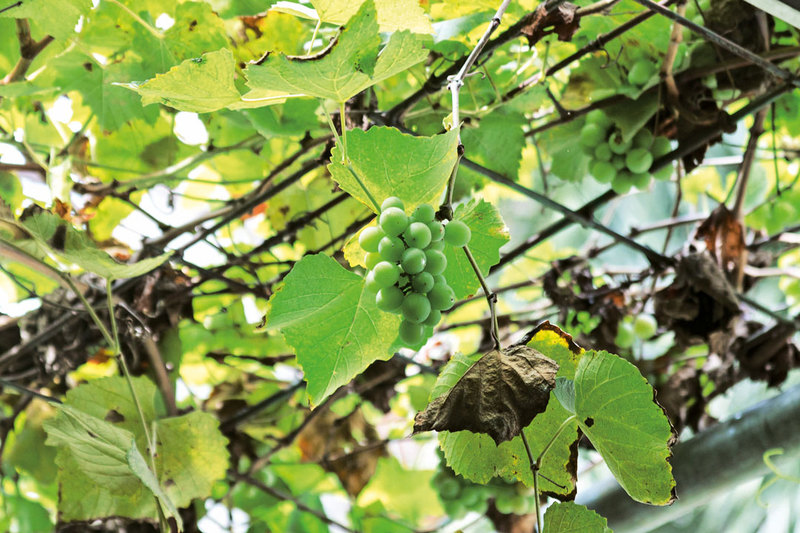 While showing the neat line of hydroponic units on the edge of the river, Adian told NOW! Jakarta, “It wasn’t like this before, I used to plant vegetables conventionally. When there’s normalisation, the installation of sheet piles affected the earth and debris hinders growth. Finally, when the ground is no longer good for planting, I switched to hydroponics with simple and improved equipment. I got a permit for 400 metres to ‘green’ this river. Why this area? Because the river is usually the target of street vendors to sell or become a garbage dump. I will strictly not allow that.”

In 2014, Adian became the head of neighbourhood and got the operational fee, which he used to green alleys and improve urban farming activities. He invited his neighbours to learn urban farming and regularly holds the workshops, until they agreed to form farmer teams and started to develop hydroponics made from used cooking oil plastic packaging and plastic mineral water bottle for poly bag and styrofoam boxes collected from the neighbourhood. Crop yields are for his own consumption and also for sale. 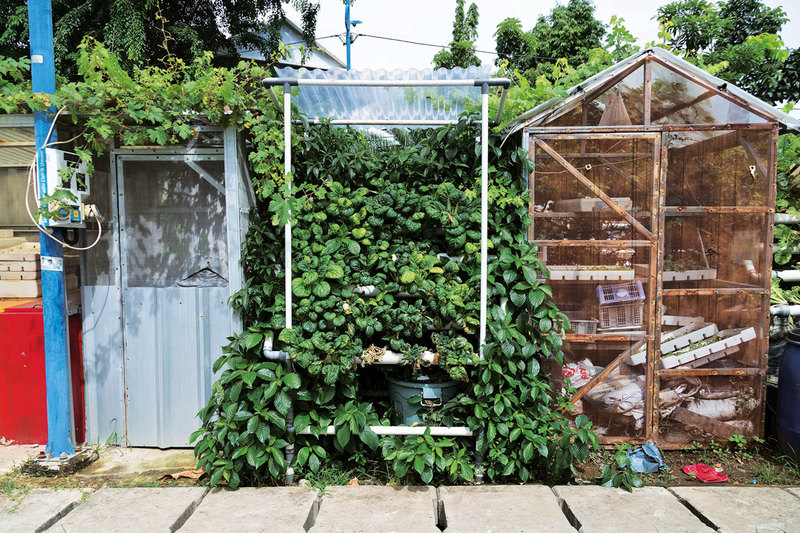 Selling hydroponics harvest is not easy. Adian admitted that he is tirelessly educating the community about hydroponic farming.

“For hydroponic, we can plant all kinds of vegetables or plants. Like here, we plant productive vegetables, such as kale, pakcoy, mustard greens, caisim, water spinach, onions, leeks and many more. I sell water spinach at IDR 20,000 per kilogram, but people don’t want to buy it because they can get them for IDR 5,000 in traditional markets. They simply don’t understand hydroponic vegetables. For now, the only chance to promote and sell hydroponic plants are only at certain bazaars, festival or specific markets,” Adian explained. 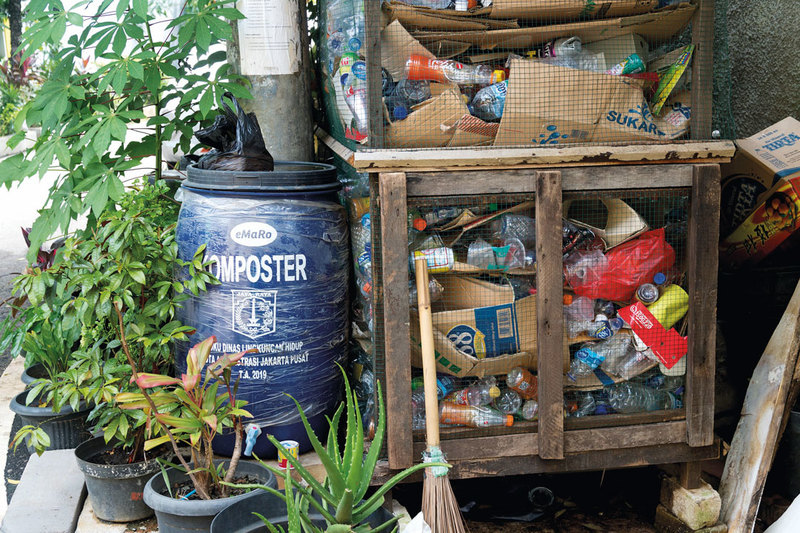 Adian continues to educate the community about the sustainability of hydroponics, from seeding, transplanting, maintenance, harvesting to post-harvest processing and return to the seedling technique. And if we look at the activity and market, hydroponic in Indonesia hasn’t reached 10%, meaning there’s big potential in developing it. Adian has successfully developed hydroponics and greening programs in his surrounding area, making many visitors both from regions in Indonesia and abroad came to that place to research and learn about hydroponic development.