Practicing yoga in the middle of a green open space park can potentially break stigmas and stereotypes, in addition to strengthening the body, mind and soul.

In 2008, the yoga community in Indonesia was hit with a terrible blow when local clerics with influence set out to prohibit Muslims from practising yoga, allegedly because yoga is a Hindu ritual that may corrupt their faith. Even though at that time it was still in planning stage, the yoga community was quite disheartened. Many yoga enthusiasts, especially from the Muslim segment, stopped taking lessons and courses. A yoga teacher who has been practicing yoga since 1991, Yudhi Widdyantoro was deeply distressed by the situation. Even a year after Indonesian Council of Ulemas (MUI) issued the fatwa, debates still heavily colour any activities done by the yoga community. From that situation, Yudhi initiated to build a community called Yoga Gembira (fun yoga) in January 2009 to promote yoga to wider public as an activity with many positive benefits as opposed to one feared by the Muslim community as long as they focus on breathing exercises, health and wellness. 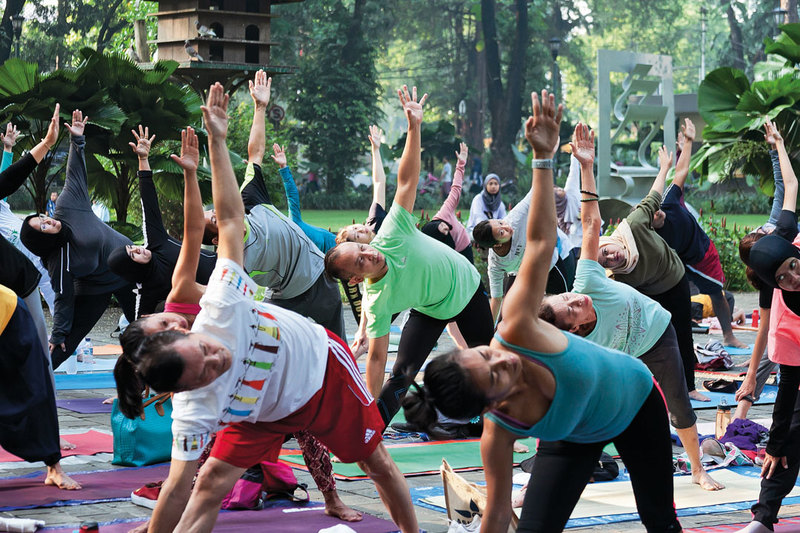 “For me, the effect of yoga is subjective and personal but I feel it brings a positive effect for people. I used to be so emotional with a very negative point of view. Through yoga, I feel calmer, healthier and more in tune with nature, because yoga leads to the divine. The issue of forbidding yoga for Muslims at that time was regretful because they don’t fully understand yoga and its many positive benefits. In addition, yoga back then was seen as a very exclusive and expensive activity practiced only by the upper class society and with no easy access and not enough classes within the community. I needed to deconstruct those views because I feel there are many people stand to benefit from yoga. And how do we that? It needs to be done in public spaces,” Yudhi added.

The funds collected are used to fund social programs or charity, such as to aid victims of natural disasters, reforestation programs, sustainability efforts, helping orphanages, empowering survivors of sexual violence and also for animal shelter.

Yoga Gembira invites people from all circles to practice yoga every Sunday morning (starts from 7 am) at Taman Suropati in Menteng to bring yoga practitioners closer to nature and appreciate yoga philosophy that draws inspiration from nature and respects diversity. The activity is free without any membership fee, but participants must be open-hearted and free of any negative intentions, in addition to bringing their own yoga mat. 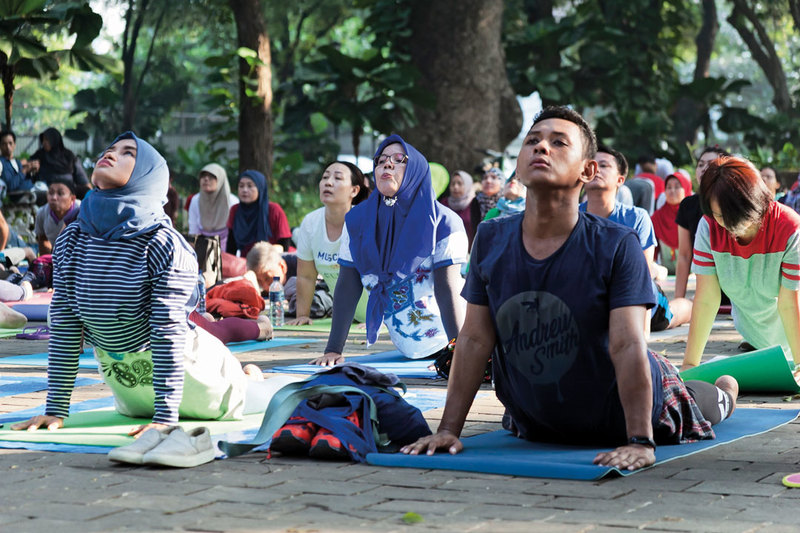 “Why was yoga prohibited? Because it was feared. One of the things causing this fear is from spells usage and the fact that many yoga terminologies is in Sanskrit language used heavily in spiritual practices of Hindu and Buddhist. In Yoga Gembira, I forbid all the instructors and teachers to use spells and mention styles or teachers in its original language because I mean to teach plurality and the beauty of diversity,” according to Yudhi.

At the beginning, the community was only followed by a few dozen people helped with a few teachers. Today, after 10 years of its existence, hundreds of yogi and yogini fill the front side of Taman Senopati, the venue for Yoga Gembira. Each session includes a one and a half hour of yoga practice followed by a sharing session in which the community invites professionals to share knowledge, such as doctors, nutritionists, environmentalists and other industry experts. Most of the partipants usually bring food and heathy snack as well as beverages to enjoy together, making the sessions more enjoyable for all. 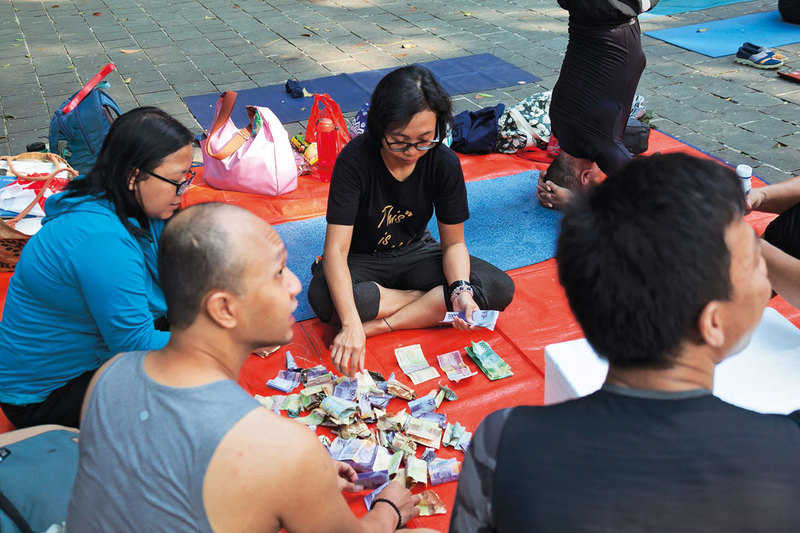 The community applies a voluntary donation system, which can be given after each exercise session.The funds collected are used to fund social programs or charity, such as to aid victims of natural disasters, reforestation programs, sustainability efforts, helping orphanages, empowering survivors of sexual violence and also for animal shelter. All of that must reflect the community’s motto; practice yoga, have fun, gain knowledge and do good deeds.

Furthermore, the community also organise Yoga Gembira Festival inspired by Bali Spirit Festival but in smaller scale and at a more affordable price. The event sees a lot of activity, including various wellness and fitness programs like various dances and zumba.Yudhi also added that Yoga Gembira is an independent community that is both open and inclusive. It’s not funded by any organisations or parties and is open to people of all religions, ages and genders without discrimination or stereotyping.

“People in general is divided into Islam, Christianity, Hindu, Buddhism and others. If we can go beyond, it’s like going up a mountain. As we start climbing, we still see lots of big trees and other obstacles limiting our vision. As we get higher and nearer towards the peak, our perspective is elevated with obstacles being very small and below, and we can see further and clearer. As a diverse society, our spirituality should be at that height,” Yudhi explained.

For Yudhi, yoga is ideally for mutual benefit, and he always puts emphasis on the inclusivity in yoga communities. “Yoga is rahmatan lil’alamin (a mercy for all creation)” he says. This is why he is quite distressed at the current phenomenon in the yoga community, where people’s orientation in yoga depends too much on style and guru which promotes segregation instead of integration.